On Friday, February 20th, the library hosted its second annual Library Lock-in, co-sponsored by the SGA Library Committee. 32 students participated in the event, in which they came to the library after-hours for food and activities.

The evening started with dinner, which allowed the students to get to know each other with casual conversation. After dinner, the students were broken up into multiple groups for icebreakers and other fun activities – including mummifying each other in toilet paper and racing to move cucumber slices down their faces. 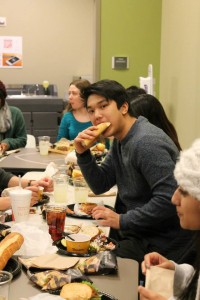 After the icebreakers, the students were given an opportunity to talk about stress and anxiety and given the chance to express themselves creatively with legos, craft supplies, and coloring books.

The evening ended with an exciting Nerf gun war. The students were divided into two teams, provided with Nerf guns and rifles, and set after each other in multiple matches. The Nerf darts soared across the library as students dove for cover.

After all the excitement, the students happily helped clean up, and then sleepily left the library for their residence halls. The library staff is always happy to help students organize such events, and we look forward to another lock-in next year! 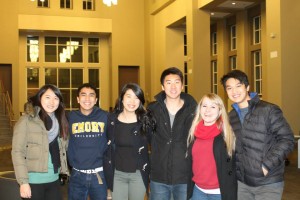