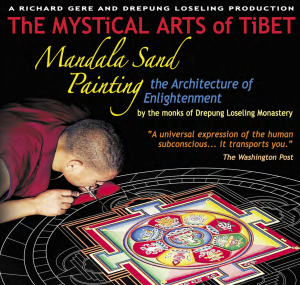 The Pierce Program in Religion is hosting seven monk artists the week of February 20-24.  The monks, who are from the Drepung Loseling Monastery, will construct a sand mandala painting as part of the Mystical Arts of Tibet tour to promote the monastery and the artistic activities of Tibet.

The opening ceremony will be Monday, February 20 at noon in the Oxford College Library, and the mandala construction will take place throughout the week in the library on the first floor. A closing ceremony and ritual destruction of the mandala is planned for Friday, February 24 at noon. You can watch the painting’s progress live throughout the week through a webcam link.

An Oxford Studies lecture “Symbolism of the Sand Mandala in Buddhism” will be given by visiting monks on Thursday, February 23 at 7:30 p.m. in Williams Hall. His Eminence Gonsa Rinpoche will speak to students at this event with translation by Geshe Nyima Tsering. At age eight, Gonsa Rinpoche received his novice ordination from His Holiness the Dalai Lama. In the same year, he joined Drepung Loseling Monastery in South India for his monastic training. While pursuing his traditional monastic academic studies at the monastery, Gonsa Rinpoche also received numerous advanced Tantric Buddhist teachings, transmissions, and empowerments from some of the greatest masters of Tibetan Buddhism. As an exceptionally gifted student, he completed his studies with the highest distinction, receiving his Geshe Lharampa degree (the highest academic recognition in Tibetan Buddhist tradition) in 2013. He then spent a year studying advanced Tantric philosophy and meditation at Gyumey Tantric Monastery where he was awarded Ngagrampa degree.