Recently, Obama declared an executive action to aid immigrants that are in the US. In his speech he stated that immigrants would be able to have a permission to get a job legally and not fear deportation. There were only certain immigrants that were eligible for this permission and those were the ones who have been living in the U.S for at least five years, they must get a criminal check, and they had to pay all the taxes they hadn’t paid over the years. This permission would only be temporary though it did not guarantee immigrants citizenship. Since his declaration there has been much debate on the issue and in an article by NBC News, Obama is seen giving a speech about the topic again. In this speech he states that he believes that congress will not come into an agreement with a permanent immigration reform until the issues of tax reformation, infrastructure, and trade are resolved first. Obama still stays optimist about the possibility of the Republicans saying yes to an immigration reform. Obama also feels that congress will try to “take a stab” at his executive action but then eventually come to an agreement. The question that many immigrants have now though is whether they should fill out the temporary permission. Some fears are that for the two years that Obama remains in office everything will be okay but what will happen after? Will the new president eliminate the reform? And if so what will they do with the information they acquired from all the immigrants? 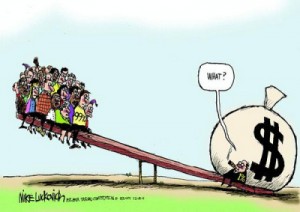 I chose to write about economic inequality this week. Economic inequality is defined as the extent to which income is distributed unevenly in a group of people. One of the biggest factors that cause this uneven income distribution is multimillion dollar corporations. Places like Walmart, McDonalds, and Starbucks. Each year these companies profit greatly from their sales, yet their workers receive minimum wage pay. It’s not until they have worked for years in that company that their pay begins to increase, but before that happens they have to endure outrageous work hours, for example having to work on Black Friday instead of being able to celebrate Thanksgiving with family. In Walmart specifically, workers must keep quiet if a customer disrespects them and this leads to verbal offences that employees must take in order to keep their job. It is an unfair system because hard working people get the bare minimum salary, while company owners sit at their desks all day and they are piled with millions. Another thing that corporations do is build a chain around a small business, compete price-wise, and eventually run it out of business. It is sad to know that corporation owners who have more than enough money would have the heart to close down a small business with people who probably invested their life savings on the shop. I chose this picture because it is an adequate representation of how unequal our society is. With the majority of people having to struggle and work hard and then the minority having all the money, power and say.

In this post I chose to talk about deportation and the families that become separated because of this. President Obama set a self-imposed deadline for an Immigration Reform which was by the end of summer this year. As the end of summer approached Obama began to hint at the idea that the deadline would not be met. This is because Congress cannot make a decision as to how to go about the issue. With the upcoming elections in November, many democrats didn’t want him to act because they felt it would “doom” their chances to win in the elections. So now the White House has set a new deadline which is for the end of this year. Many advocates were upset about this and they protested outside the White House last month. Within that protest there was a boy named Andres Jimenez who spoke with a microphone in tears telling the President that he wanted a family like his and explaining how his missed his father. The sad thing is that Andres is only one of millions of families who are torn apart each year. I come from Phoenix Arizona and as everyone knows Arizona is one of the most targeted places for deportation. It wasn’t uncommon for me to hear that someone I knew didn’t have one of their parents around because they were deported. Life becomes a struggle for their family because they first have to spend money they don’t have to get an attorney. Then there is still the high risk that the person in jail will get deported. If they do get deported the family just lost either the primary income provider or care giver. The ones who end up suffering most are the children because the people who they love and depend on are taken away from them. They don’t really get to have a childhood since at an early age they have to become responsible for the family while also constantly wondering if they will see their father or mother ever again. When I read this article it stood out to me because I have seen many families separated just like Andres’s and I felt it was necessary to share this story with the class. I urge you to watch the 7 minute video so you can hear the sadness in Andres’s voice as tell President Obama that he wishes he had a family like his. 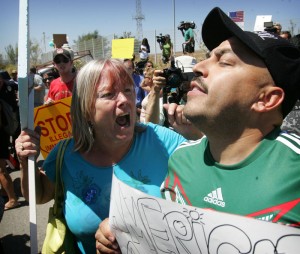 I chose this image this week because I was surprised at how so much anger is built up into some people when discussing illegal immigration. In this image the lady is an anti-immigrant protester who is yelling and eventually spit in the face of the Mexican singer Lupio Rivera. The reason that they were at the protest was because a bus full of undocumented women and children were being sent to a federal facility where they were going to be given food and shelter until the government decided whether to take then back to Mexico (which some of the people in there were not even from Mexico) or keep them in the U.S. When some Americans heard that they were not being directly deported they decided to take matters into their own hands and block the bus’s entrance to the facility. Eventually there were two groups of protesters, the ones who were against the children staying at the facility, and the ones who were for it. Lupio Rivera was one of the people who was for the children getting shelter and food and he let everyone know that at the rally. Things became so heated at some point that a woman yelled nasty slurs at him and he was spit on in his face. I feel that this is an important image because how is it morally correct to disrespect someone in that matter? Despite being treated that way he stayed and kept protesting peacefully. This topic brings many things in mind; for one how can people who were once immigrants to this country tell small children to get out?

In class on Thursday we had an intense discuss about segregation, civil rights, and how it is still going on today. As I was going through some pictures on Google I stumbled upon this one which really captured my attention. As a student who once went to a “poor only” school, I felt as though by looking at this that I was cheated out of more opportunities. While at my school I never felt like I was less or seen as a statistically low probability of going to college. I feel like we should touch the topic of segregation between classes much deeper because it is something that is going on in the present times and it shouldn’t be happening. A student shouldn’t be automatically expected to fail, if a family doesn’t have the fund to send their child to a private school. I feel like I was lucky because I had a family who supported me and motivated me to do better. I also had teachers who cared about me enough to put in extra time that they didn’t have to give me in order for me to succeed and go to a good college. Every student should have those opportunities though. Rich or poor we are all human and deserve to get a good education and options. We shouldn’t have politicians using money, which could help students, on border patrol or even on things like gun control. I feel like it is time to speak out about thing and that is why I chose this picture. I would like to further discuss this in class.