This article is incredibly relevant today (December 3rd) because a grand jury in New York decided not to indict white police Officer Daniel Pantaleo for the chokehold death of Eric Garner in July. There is video proof of Garner, a black male, raising his hands in the air and telling police officers not to touch him. It is clear in the video that he did not become violent in any way and that there was no reason to restrain him so forcefully. The police suspected Garner of selling cigarettes illegally. While obviously his actions were illegal, they were not violent actions therefor he should not have be handled with such force. Currently around the country protests are taking place. On Emory’s campus there was a protest going on in Asbury Circle Wednesday night, which is emblematic of the unrest within the minority population of the US. Protestors around the country are chanting “I can’t breathe” as Garner stated multiple times as the officer held him down. These protests demonstrate the state of struggle within the United States currently. Minority communities struggle with their relationship with law enforcement because of issues like these that add to the schism. President Obama released a statement in which the case reflects a longtime “concern on the part of too many minority communities that law enforcement is not working with them, and dealing with them in a fair way”. The fact that the president, and the rest of his administration understand that issues of accountability exist within law enforcement begs the question as to why these issues haven’t been addressed on a grand scale. This case does not illuminate a new issue in current American society. Things like the former “stop-and-frisk” police policy made it systematically “okay” to racial profile. Policies have been set in place for years that either purposely or accidently subjugate minority communities in the United States. The issue is clearly defined, since the Obama administration has recognized it, therefor-legitimate action of reform should be paramount.

The article “For Every Executive Action, There is a Reaction”, published on November 22, 2014, illuminates the implications of Obama’s immigration policies. Last week Obama announced a plan that is “to be enacted by executive order”. The plan that will affect nearly 4 million undocumented individuals caused a rift between Democrats and Republicans. His use of executive order has caused the GOP to think that this is a big abuse of power especially from a president whose party just lost the midterms. Obama claimed that the failure of the House Republicans “to bring up consideration of a Senate passed immigration bill necessitates his executive order”. The House is expected to pass a bill aimed to combat his entire plan that seeks to “provide additional resources for law enforcements to help curb illegal border crossings; make it easier for high-skilled and educated immigrants to stay; and to “deal responsibly” with undocumented immigrants who already live in this country”. The house is well aware that this bill will have no chance of passing but plan on attempting to show their unrest with his order through the bill. Most attacks on Obama have been about him utilizing his executive order powers not necessarily attacks on his proposed plan. Personally from what I know of his proposed plan, I think Obama is making incredible strides in finding practical problems attached to immigration issues. His plan “delays deportation for undocumented individuals who have already been in the United States for more than five years and meet certain other conditions”. This concept captures the fact that his administration is looking at individuals that have spent a sufficient time in the country and have positively contributed to the American economy. In this way immigration is looked at on an individual basis rather then implementing policies that group collectives with diverse situations together. In looking at each individual and their contributions whether positive/negative immigration issues take on a more subjective lens.

I remember seeing this on the news over the summer and was absolutely dumbfounded at how obvious the use of force was. I am so mad that nothing was done and the office who used a chokehold, a move that is not allowed to be used by law enforcement, basically suffocated Eric Garner. No medics even reported to the scene and no one tried to revive him. All of this was over the suspicion that he was selling loose cigarettes. Unlike the Micael Brown case, the altercation never became physical and Garner never charged at police officers, instead the officers came onto him and he said “do not touch me I did nothing wrong.” I thought this would be appropriate to bring up in class at some point especially considering the Grand Jury’s decision.

I don’t know how many of you have already seen this or have already signed it but I thought it may be of interest to some. This is a petition to end “Police violence and misconduct” as of right now it has 253,987 signatures and needs 746,013.

So I didn’t want to post something directly related to Ferguson this week, because while it is extremely important I feel like there are more things that we should talk about other than who was right and who was wrong. The fact is that a man wasn’t even forced to go to trial over this controversy and that, no matter what happened, is wrong.

But I also wanted to focus on the repercussions of this incident. Because Wilson wasn’t even indicted what kind of message does this send to the nation? I stumbled upon this article that seems to offer one possible theory. The article features a African American mother reflecting how the Michael Brown incident and the Tamir Rice case will effect her son. She talks about the fact that she has always know that she would have to have talks with her son on how to be a African American male growing up in America but she always thought that these talks would happen in the distant future. But now she questions how old her son will be when she has to uncover the grim reality of his future in America. What really stuck with me through this article was the sense of fear that is carried. The fact that this boy would no longer be able to function freely because of the fear that his own life may be in jeopardy. Now last time I checked fear was not a right guaranteed in the Constitution to all people. So why is it that now life in America for some is now operated under fear? And how can we change that?

The second half of 2014 has been full of protests all over the globe.  From Ferguson to Mexico to Hong Kong to Thailand, people have been rushing the streets to get their voices heard by their government.  We have become influenced by what we see and hear through media, through the news.  But, as seen in Bangkok, pop culture media can also influence the world.

Recently, the government in Thailand has banned the release of the new Hunger Games movie, “Hunger Games: Mockingjay Part I.”  The franchise has been used as sign of solidarity amongst those that resist the authoritarian government, more specifically, the three-finger salute that is used as sign of unity and rebellion in the movie.  Similarly,  larger groups of individuals had been detained for throwing the salute to show their resistance to the coup in the country.  The article also points out another novel that has been used as a way of rebellion, one student was arrested because he was “silently reading George Orwell’s dystopian novel ‘1984’ in public,”

I think it is amazing how influential pop culture, especially works of Young Adult Fiction, can be to the world.  The Hunger Games is a story about revolting against a tyrannical government, that is literally killing its citizens.  Pop culture has been a way to fin unity in a world that is constantly trying to label and separate people.  The intermingling between pop culture and real world issues may help create a new way to protest and make political statements well known, but does it also make a movement into a fad?   In today’s world, the answer may be yes.  But if this is a negative is for the individual to decide.

For my post this week, I wanted to write about the article published in the latest issue of The Rolling Stone by Sabrina Rubin Erdely on November 19 titled “A Rape On Campus: A Brutal Assault and Struggle for Justice at UVA.” I wanted to write about this mainly for two reasons, one, because I felt this article was very well written and is one of those pieces that blows things wide open and exposes huge problems. This article is without a doubt a game changer, especially in the federal investigations of currently 76 universities conducted by the Obama administration. The article also relates to the huge uprising over the Michael Brown decision. The two are related because both are signals of major mass movements for change as they both symbolize “the final straw” so to speak. This article finally has brought the attention to sexual assault on campus that it deserves and has shown us that the issue is much worse than we though. The same is taking place with the nation-wide protests and riots in response to the case of Michael Brown, which shows the injustice cast upon blacks by the legal system and unfair amount of power police officers posses. Both are what I believe to be a “call to action” and are the beginning of social justice movements. Although the article is long, it contains a plethora of factual information, holding UVA accountable. “In the last academic year, 38 students went to Eramo about a sexual assault, up from about 20 students three years ago. However, of those 38, only nine resulted in “complaints”; the other 29 students evaporated. Of those nine complaints, four resulted in Sexual Misconduct Board hearings. UVA wasn’t willing to disclose their outcomes, citing privacy. Like most colleges, sexual-assault proceedings at UVA unfold in total secrecy.” The fact that 38 rapes took place on campus and only 9 of them ever went to trial is frightening. It is also important to note that the maximum sentence for an offender was two years, no one has ever been expelled. There is too much content for me to cover, but I strongly encourage all of you to read this article. It shows the problem behind the reporting process at universities, and also blasts open the culture that has now formed at universities across the nation. 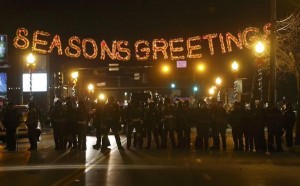 above is a photo from Ferguson that has really stuck with me tonight. I have been following this on twitter via NPR who are retweeting people describing the situation on the ground and other twitter users voicing personal outrage and concerning opinions being voiced from either side of the issue. obviously this is not the entire story, but i just wanted to leave these bits here for anyone needing a reason to care or a place from which to begin their personal investigation. I would also see the Brown family’s response to the grand jury’s decision, McCulloch’s press conference, and Obama’s speech.