34 countries make up the OECD (Organisation for Economic Co-operation and Development) a group of countries dedicated to global development, almost all of which have a high Human Development Index and are high-income economies. Of these countries Mexico, Chile, and the US are the only countries where less than half of spending on healthcare is publicly financed (OECD). 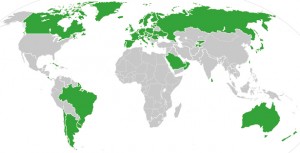 Mexico and Chile have two of the lowest three GDPpc (gross domestic product per capita) adjusted for purchasing power in the OECD with $17,019 and $21,486 respectively (OECD). The US is clearly an outlier being one of the only developed countries without universal healthcare and by far the richest without it. It is well within the ability of the United States to provide universal healthcare. People can argue about the economic pros and cons of universal healthcare, but at its core, the lack of healthcare provided to everyone in the US is a moral issue. “While other countries have declared health care to be a basic right, the United States treats health care as a privilege, only available to those who can afford it” (Chua).

According to Lawrence Gostin, a government “is compelled by its role as the elected representative of the community to act affirmatively to promote the health of the people” yet “cannot unduly invade individuals’ rights in the name of the communal good” (11). This seems paradoxical, but a government must consider whether the benefits of promoting the health of its people outweigh and justify the invasion of the individuals’ rights. Considering the wealth of the US (GDPpc = $51,689), the impact on each individual would be relatively little with a small portion of people’s paychecks being diverted specifically for healthcare as opposed to the more generic taxes where it is not immediately clear where the funds are going. And the impact would be dramatic. Every year 18,000 excess deaths occur among the uninsured under the age of 65 (Institute of Medicine) and many more live with aliments that could be relatively easily treated or crippling debt due to necessary healthcare costs. The problems from the United States’ lack of universal healthcare falls, like many societal harms, disproportionally on minority groups. Hispanics are two to three times more likely to be uninsured than non-Hispanic whites (Institute of Medicine). Viewing healthcare as a privileged also perpetuated the cycle of poverty which so many Americans are trapped in.

The United States has a moral obligation to provide universal healthcare to its citizens. There is “No ethical principle can eliminate the fact that individual interests must sometimes yield to collective needs” (Childress) and the case of universal healthcare is a time where the rights of the individuals must be infringed upon in order to provide for the general population.

Institute of Medicine. Care Without Coverage: Too Little, Too Late. National Academies Press, 2002.