This week we began a three-week series of readings and discussions about the audiovisual languages of theatre, film, and performance art.  The last two weeks we discussed basic vocabulary of the three media, jointly and separately (acting, performance, stage, camera work, sound, and so on), and now we begin to work with larger building blocks.  What characterizes the audiovisual language of theatre, specifically?  We established the importance of acting, set and costume design, and movement/proxemics.  We discussed the importance of separating the written text (dramatic literature) from the staged performance (spectacular dimension, theatre, hecho teatral), being fully aware that these two dimensions of theatrical semiotics cannot be understood properly unless they are seen interactively.  We analyzed Lope de Vega’s New Art of Writing Plays, the Comedia manifesto in which the playwright established his debt to Ancient theatre, and his thorough knowledge of current theatrical practices: units of space, time, and rhyme; the three acts; the interludes or entremeses; the distribution of the dramatic conflict; and the casos de honra and the difficulty of staging uxoricide. 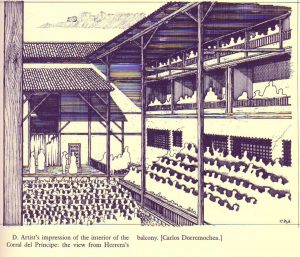 Wednesday we are going to discuss Augusto Boal’s Forum Theatre and Invisible Theatre.  These two concepts are key to understanding the relationship between the audiovisual language of theatre and its development in LatinoAmerica.  Without understanding this, we cannot fully grasp Latinx Performance Art.  Bring your questions, lacuna, comments, epiphanies, and so on to the table in class during our discussion, and here thereafter.

This is the first mandatory post.  It is due on Saturday September 22 at 5PM at the latest, although you can blog at whatever time you want before that.