What is a Wari tie dye textile?

The Wari invented a number of textile techniques designed to express their world view and relationship with nature and as a statement of their wealth and power. The tunics and mantles which are called “tie dye” textiles actually employ a number of different techniques but the creation of the bright patterns through methods of wrapping or covering specific sections of cloth (like when you dye a T-shirt) has given them their name. The fragment found in the collections of the Michael C. Carlos Museum would have been part of a larger piece of clothing probably worn by a high ranking state official.

This is an overview of the fragment I will be recreating

You can see on the left side of the fragment how it has been cut out of a larger cloth. Unfortunately, it was likely created as a result of an unscrupulous art dealer cutting up a whole object to make more money by selling the pieces separately.

At first glance, the whole fragment seems to be a very clever use of tie dye or dyeing by covering areas with wax (resist or batik dyeing). However, a close look and an examination of the visible stitches reveals that each of the stepped triangles was woven separately, dyed separately and then put together. Besides the stitching, there are a number of clues which indicate this. The dye patterns seem to line up across the different triangles as shown in the photo below: 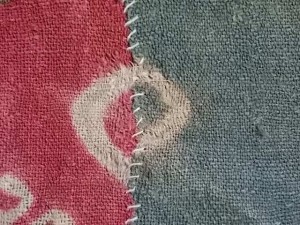 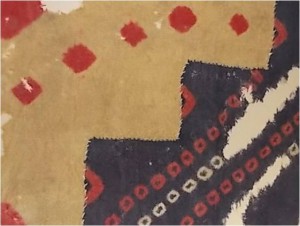 All of the triangles except the red one have also been dyed twice. The purple triangle was first dyed in blue and then the alternate rows of little squares were tied up and it was dyed in red  to get the different colors.

Here is a close-up of the purple triangle. If you look carefully you can see a red ring around the white square closest to the top where the dye leaked under the wrapping.

The yellow triangle was dyed in the same way, except the yellow was the first dye and red the second. 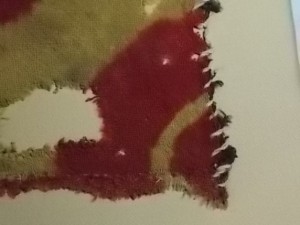 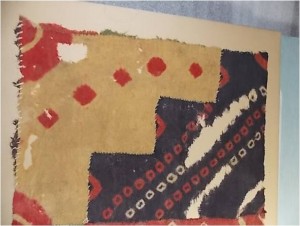 The way that they were able to do this is by wrapping the vertical threads or the warps around a tight string which was attached to wither side of the loom frame (see textiles for beginners if these are unfamiliar words).

The warps were alternated and when the triangles were finished, the strings were pulled out and the two pieces popped apart. I will show pictures of this when I finally manage to do it! 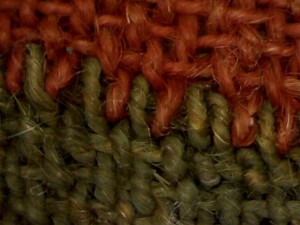 Here comes the really cool part which I doubt I will be able to achieve in my reproduction but I’m going to try! I said the strings were pulled out after the triangles were woven, so why does it look like the string is still there after the triangles have both been dyed? The string was actually slipped back through the warp threads in the exact order that was there originally to re-weave the triangles back together! That is way not every area where the different triangles are joined had to be sewn together. See the brown thread? This is the thread these warps were originally wrapped around when it was woven.

If they could do that, then why did they need the stitches at all? The answer is that they technically could have used threads to connect these sections together in the same way, however just like with the uneven dye patterns, they wanted to call attention to the fact that these are separate pieces joined together. This concept of two different things coming together was an important part of their worldview and will be featured in a separate post.