One of the goals of this project is to reach out to people who are unfamiliar with textiles or know something about them but not about the ancient types created in the Pre-Hispanic Americas. Thus I seek to use as little obtuse terminology as possible and many posts will be focused on explaining many of the more difficult techniques. This page will introduce the very basic terms and techniques that are the building blocks required to gain an understanding of woven textiles in general. Throughout all the posts I will highlight key terms for understanding textiles as they are written about so you can build a vocabulary if you decide you love textiles and want to study more.

Fiber: The raw animal hair (including human sometimes!) or plant tissue processed to make thread. Animal and insect fiber (silk) are easier to process because they are composed of proteins which like to stick together. Plant fibers such as cotton are more reluctant and thus difficult to turn into thread.

An animal fiber (alpaca) on the left is contrasted with a plant fiber (cotton) on the right. You can see how much more sleek and straight the cotton is as opposed to the alpaca which is much more flexible and curled up.

Spinning: The process of making thread that can be done on a variety of tools. The most basic is called a drop spindle and it looks like this

They are composed of two parts and sometimes three such as the one above. The stick in the center is called the shaft which is topped by the disk called a whorl. The spindle above is called a top whorl spindle because (you guessed it!) the whorl is on the top of the shaft. Top whorl spindles are easier to use for most fibers except cotton, especially if they have a nice hook at the top as this one has. Bottom whorl spindles are much more popular in the Americas today and were probably the type used in antiquity. However they are much slower for me because I’m not really that good with them so I will use this top whorl spindle.

If you have seen spinning demonstrations at fairs or historic house those were probably done on a spinning wheel which was the form colonial handspinning took in Europe, the United States and Canada. I have chosen to use a drop spindle for all of the thread in this project because it was the spinning method in the Americas until the arrival of the Spanish in the 15th century.

The way a drop spindle works is that a thread called a leader is attached to the shaft. It is the grey wad of thread in the picture above. The way that I was taught to do a leader is to make it into a loop that you can insert the raw fiber into. Spinning CAN be done without a leader and I have seen this demonstrated but prefer to stick with the leader. Then you simply start to spin the shaft while using your fingers to control the movement of fiber through your hand, a process called drafting. I throw the length of raw fiber over my shoulder when I am working to keep it out of the way.

Here some alpaca is looped through the leader.

Plying: I describe plying as thread with friends. After you have spun your thread it is usually a good idea to twist two or more together to make a sturdier working material. A single piece of thread that is alone is more likely to pull apart when you are working with it or break. There are many ways to ply but the one I will be using is called Andean plying. It is used in the Andes today and although we don’t know what technique was used in antiquity it is likely to be some version of this.

Here I am plying in the airport killing time. I will do a separate post on Andean ply specifically but what is important to note here is that I have two threads, one on each side of my hand which I am twisting together with the aid of the spindle.

Weaving: We are finally at making cloth! The basic technique of weaving requires two sets of threads, horizontal ones called weft and vertical ones called warp. The most common way of weaving is to move the weft threads over and under the warp threads which remain stationary. This is called plain or tabby weave. This is the way the Wari tie dye cloths are woven. 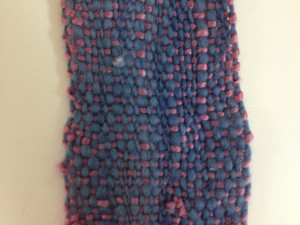 This picture shows plain weave. The pink weft threads have been passed over and under the blue warp threads.

The warp threads are kept stationary and tight by being wrapped around a loom or the structure on which the cloth is made. The two types of looms that you will see in my posts are a backstrap loom and a frame loom. A backstrap loom is simple two sticks that the warps are wrapped around. One stick is tied to a support like a tree or in my case a coat hook so I can stay inside! The other end has a belt that goes around you waist to make you the other anchor. One of the most essential parts of weaving is keeping the warp threads nice and tight which you accomplish in back strap loom by leaning or sitting back.

This is my attempt at a backstrap loom (more about that later). The blue threads are the warps, the stick at the top is the one I attached to the coat hook and the bottom should have the belt but it is missing here. Recognize the colors from the previous photo?

A frame loom is a rectangle like a picture frame ( I actually made the one I will be using out of a paint canvas). In this case the top and bottom bars where the warp is attached are secured to side bars which keep them steady and the warp tight.

This is my frame loom but with no warps

Dyeing: The process of turning fiber, thread, or cloth different colors. It involves water, the material that is producing the color, and the material that makes sure the color sticks to what is being dyed and won’t wash out. It can be done at any stage of the process, however it is very difficult to dye fiber because if the water is too hot you will get a lump of fiber fused together (congratulations you have made felt!) that cannot be separated and spun. Dye material can be either natural or synthetic. For this project I will use plant and insect based dyes that would have been used by the Wari. The tie dye textile was dyed after the cloth was woven so that is the technique I will be going more into detail about later.