Sumedh Khanolkar, a first-year Emory student from Mumbai, India, first became concerned about fake news a few years ago. False rumors about child abductions were spreading through social media in his home country, leading crowds to attack innocent strangers, beating and sometimes even killing them without any evidence. 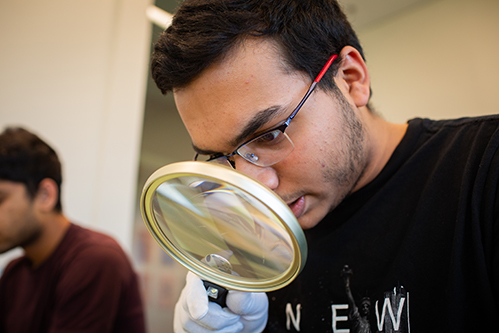 Sumedh Khanolkar handles and examines a photo using cotton gloves and a magnifying glass in the Rose Library. All photos by Emory Photo/Video.

“People have died in India because of misinformation that’s being passed around,” Khanolkar says. “Right now, we’re at a stage where someone can use a program to create a GIF or video” that makes it appear that a person said or did something inflammatory, which then endangers their life, he says.

When he saw the class “Fake News” among the options for Emory College’s required first-year seminars, he jumped at the chance to enroll. The class involves studying examples of fake news, conspiracy theories, hoaxes, biased stories and wrongful convictions, in the U.S. and in other countries, as well as discussions of how the falsehoods took hold and were eventually debunked. 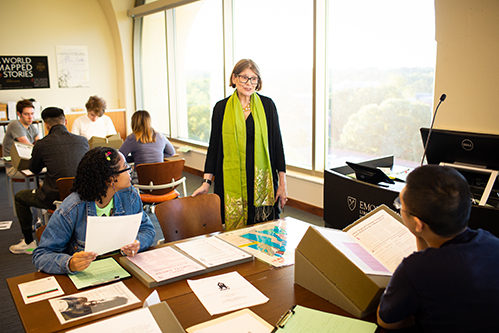 The class is taught by Judith Miller, associate professor of history. Course goals are wide-ranging: to introduce first-year students to history as a discipline; to teach them how to conduct research using historical sources; and to improve critical reading, writing and analytical skills. Ultimately, the class will yield students who are aware of the bias and manipulation in what they read and watch, and who know how to track down the truth.

And, Miller explains, the class aims to increase the students’ knowledge of other resources available on campus, particularly library research resources, databases and the subject librarians who can help students navigate those resources. “I’m a big believer in libraries,” she says.

Students in the class come from across the U.S. and around the world. Miller refrains from having students say where they’re from until the third week of class, after they have built camaraderie.

“It’s an interesting mix of students, given the present world context,” Miller says. “Some are very interested in tackling topics from their home countries and in their first or second languages.” 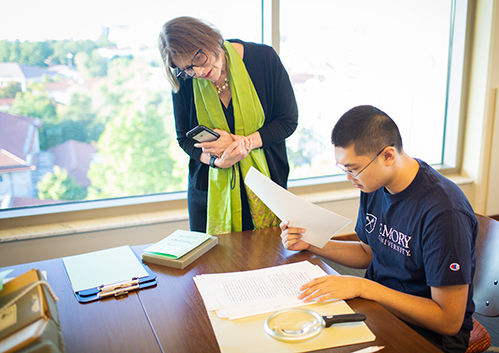 Jeffrey Gao and Professor Miller discuss an item from the Rose Library archives pertaining to the Leo Frank murder trial in the early 1900s.

To prepare for their research, the students took part in a resource “scavenger hunt” in September with the help of world history librarian Chella Vaidyanathan. Each student tracked down primary and secondary sources pertaining to a topic they chose from a list of rumors, hoaxes and half-truths that became part of the news cycle of its time.

“The scavenger hunt is an excellent opportunity for the students to get started on their research,” explains Vaidyanathan, who also met with the students for individual research consultations. “As I showed them how to use the different databases, they caught on very quickly and took notes on search strategies. My goal is to empower them with information literacy skills that they need to locate and use relevant primary and secondary sources for their research.”

The class also headed to the Rose Library to examine materials with instruction archivist Gabrielle Dudley, who pulled items from various collections to illustrate themes of historical mistruths, exaggerations, propaganda and other ways the truth was stretched.

Students examined materials that included the sensationalized murder trial and lynch-mob hanging of Leo Frank in 1915 and items from Southern white organizations from the 1960s, including the Ku Klux Klan, who used mailers and other propaganda to mobilize white masses to block African American progress.

“The students approached the different sets of material with a lot of intellectual curiosity,” Dudley says. “As they worked together in groups, they became absorbed in the materials and noticed subtle mistruths and inconsistencies in each ‘story’ as they moved from source to source. They were able to question the information in the sources, and they noticed biases and silences within them as well.”

The class will be repeated in spring 2020 in order to meet the demand for more first-year seminars, Miller notes. Given high student interest in the topic, she also is developing an upper-level writing requirement version of the course for Emory’s history department.

“You never know what issues Emory students will choose for their projects,” Miller says of the students’ individual research presentations. “They are so curious and bring an amazing range of interests into the class. The last weeks are always fun, between the topics they are pursuing and their excitement about the unexpected sources they found in our library. I expect I will submit at least one paper for the library research prizes at the end of the year.”