. . . . Beginning in the seventeenth century, Jews in Eastern Europe used the Yiddish term klezmer (pl. klezmorim) for the professional musician, derived from the Hebrew word for musical instruments. Klezmer ensembles (kapelye or khevrisa) were exclusively male and featured no vocal genres except for wedding rhymes and songs. The klezmer profession as well as the specific instrumentation of the traditional ensembles were derived from the older Ashkenazic centers of Central Europe. However, the genres and style of European klezmer music originated in the large Polish-Lithuanian Commonwealth, probably before the middle of the eighteenth century. . . . Throughout the territories of this Commonwealth, klezmer music played a very important role in the musical life of Jews and the society at large. In much of these northern areas where Gypsies (Rom) were never very numerous, the klezmorim constituted the majority of the professional musicians. Principally located in the private towns on the large estates of the Polish nobility, the klezmer kapelyes were organized in a tight, guild-like structure, with the occupation passed down within families. . . playing classical and entertainment repertoires for the nobility, mystical melodies for the local Hasidic dynasty, and wedding melodies for the Jews. . . . [In other areas of Eastern Europe, klezmorim repertoires] required some familiarity with Turkish and Greek music. . . . In less favorable conditions some or all of the kapelye members adopted other professions to make ends meet. Some of the these musicians . . . also played in taverns or at peasant weddings. In desperate straits a kapelye might break up and the individual klezmorim take to wandering . . . . In Ottoman Romania it was common for even successful kapelyes to team up with Gypsies and go on tour in the Balkan cities.

. . . Some kappelmeisters [leaders of a kapelye] emigrated to American cities such as New York, Boston, and Philadelphia even before 1900. Occasionally they were able to set up new kapelyes with relatives or countrymen. In other cases they found it more lucrative to leave Jewish music altogether and play in the American mainstream as soon as they could. . . .

.. . . The European kappelmeisters had been violinists, but in America the clarinet soon became the leading Jewish instrument. . . . [The sound of this clarinet-based American klezmer] dominated American Jewish dance music during the 1930s and 1940s. This sound and repertoire retained a certain nostalgia value into the 1950s and even the 1960s and shaped what American Jews thought of as Jewish dance music.

. . . In the mid-1970s, several young American Jewish musicians rediscovered the klezmer repertoire as well as klezmer recordings made decades earlier on 78 rpm recordings, and — most importantly — surviving older klezmer musicians, many of whom had not played actively in years. This “klezmer revival,” which now has many centers in North America and Europe, began in the New York City region. 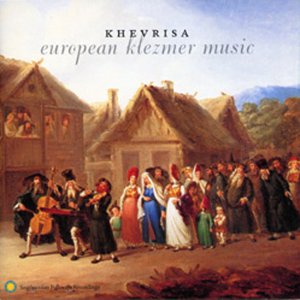 Dobriden (G minor) Steven Greenman, first violin; Alicia Svigals, second violin; Walter Zev Feldman, cimbal or hammer dulcimer. This piece, which dates from the mid nineteenth century, was used either on the morning of a wedding or after the wedding to honor the members of the bride’s family or the bride and groom themselves. Dobridens were display pieces created by talented klezmorim that used a 3/4 rhythmic structure with a peculiar rhythmic formula at the close of phrases.

Terkisher Gebet (Turkish prayer). Steven Greenman, violin solo. This piece also dates from the mid-nineteenth century and a Galician klezmer fiddler who had performed in Istanbul.

Old Bulgar Steven Greenman, violin; Alicia Svigals, second violin; Michael Alpert, cimbal or hammer dulcimer and bass. One of the oldest known examples of the Jewish bulgarish dance, created in the later nineteenth century out of the Moldavian dance traditions. It was first recorded in Istanbul in 1912 by a Moldavian klezmer ensemble, apparently for a Greek market. The emergence of the bulgarish represented the new popularity among Jews of the purely Romanian and secular element in Moldavian urban folk music.
–Source: Khevrisa: European Klezmer Music (Smithsonian Folkways Recordings, 2000)