Click for a larger version of Sea Islands map.

Listen to selections (listed and linked below) from the album Been in the Storm So Long (1967) (Folkways CD SF 40031, recorded in the early 1960s on Johns Island, South Carolina by Guy and Candie Carawan.

Johns Island is one of a cluster of islands just south of Charleston including Wadmalaw, Edisto, Kiawah, Hunting, and St. Helena. These islands share the Gullah culture with African American expressive forms and practices that, well into the twentieth century, were among the oldest found in the US. “Gullah” refers to the English Creole language sometimes spoken  in this area; Gullah can also refer to this region’s traditional culture as a whole. With a strong African/Anglo Creole heritage, the Sea Islands share a connection to the English Caribbean. The low flat islands off the coast of South Carolina have only had bridges and causeways built to them from the mainland since about 1930. Because of its relative remoteness until the Post World War II era,  Gullah culture on the Sea Islands retained many aspects of older traditions, including the spoken dialect, spirituals (and a distinct style of singing) , their adaptations of Christianity, and “praise house” form of worship, oral narratives, and beliefs. When Guy and Candie Carawan made the recordings heard on Been in the Storm So Long (1967), many of the people on Johns Island had a difficult time making a living. They worked primarily as domestics and field hands. Some of them went to the nearest city, Charleston, for work. Central to the  music of Johns Island was Moving Star Hall, a gathering place for the older people. The small clapboard building was built in 1913, but the praise house form of worship and the Hall’s burial society go back much further. Worship patterns continued here that developed during the nineteenth century. A distinctive example is the religious “shout” in which complex hand and foot rhythms are added to the singing as the congregation’s spirit mounts.

This is Esau Jenkins talking, who have known these people for years, have known the tribulation, have known the ups and downs. Every December, on the 24th, they have what we call a Christmas watchnight meeting here in the Moving Star Hall. They know the tune, they’re ready to shout. They’re giving praise to the great Supreme Being who have stood by them in past days from slavery up to this present. Right here tonight they will be singing from twelve o’clock until Christmas morning.
Just to hear these songs remind us of our hardship. Those songs are the ones that made them happy, made them go through those hard days — the days when they didn’t have a place to live of their own, didn’t have a piece of land of their own, and were living on a plantation.

These people are hard-pressed people, and they are optimistic enough to believe that there are better days a coming. When they get into these religious shouts, they feel so happy ’til that’s all they can do but shout. The motions go into the hands and into the feet and they start clapping, and you can’t keep them sitting — not when they start clapping, brother. They feel so happy ’til they got to shout. People sixty years and seventy years old clap and shout and jump all over the floor without falling down.

Good time, a good time/We going have a time

Down on me, Lord, down on me/ Oh well my Lord
It seem like everybody in this whole wide world/ Is down on me (2x)

I wonder what Satan is growling about/ Chained in Hell and he can’t get out,
It seem like everybody in this whole wide world/ Is down on me.

Mind my mother how you walk on the cross/ Your feet may slip and your soul may lost
Seem like everybody . . . (etc.)

Well, Jacob ladder so long and tall/ If you ain’t got God you surely fall,
Seem like everybody . . . (etc.)

Well, Satan mad and I so glad/ Miss that soul he thought he had,
Seem like everybody . . . (etc.)

Down on me, Lord, down on me/ Oh well my Lord
Seem like everybody in this whole wide world/ Is down on me. 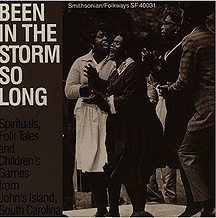 Recommended listening  (not required):  The complete Been in the Storm So Long album (Folkways Records, 1967) with liner notes.