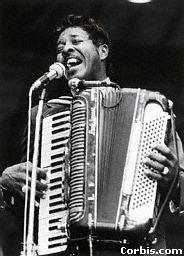 “Paper in My Shoe.” Boozoo Chavis, accordion and vocal;  Recorded in 1954. Chavis was a major player in the development and early recording of what has come to be called zydeco. He was active in the 1950s, along with Clifton Chenier. Source: Cajun Music and Zydeco, Rounder Records, 1992.

“Jolie Catin.” Boozoo Chavis and his Magic Sounds 1989. Boozoo Chavis, accordion and vocals; Carlton “guitar” Thomas, guitar; Charles Chavis, frottoir; Classie Ballou, Jr., bass; Nathan Fontenot, rhythm guitar; Rellis Chavis, drums.  If you want to know the difference between the dominantly European sounds of Cajun music as played by Dewey Balfa, and the African-Caribbean-American style called zydeco, this classic two-step “Joile Catin” is a good place to start. Zydeco is a mix of Cajun tunes, African-American blues, and Afro-Caribbean rhythms. It is performed wherever people gather to dance–at nightclubs, church halls, benefit dances, baseball games, and trail rides. You can hear zydeco from the Lafayette area west into Texas as well as in California cities with large migrant Creole communities.

“Quand J’Etais Pauvre.“  (“When I Was Poor”) (1985?). Dewey Balfa, fiddle and vocal; Tony Balfa, guitar; Robert Jardell, accordion; Tracy Schwarz, harmony fiddle; Peter Schwarz, second fiddle. A gifted musician and composer who was intensly interested in preserving Cajun music, Dewey Balfa influenced many young musicians including Michael Doucet and Steve Riley. “Quand j’Etais pauvre” is what Balfa called a “brand new old song” which almost immediately became a dance band standard. In this song, Balfa pokes fun at his situation, complaining with tongue in cheek that when he was young and poor, no one paid attention to him, but now that he is old and has a bit of money, everyone wants to court him.

“La Danse De Mardi Gras.“    Steve Riley and the Mamou Playboys. Since the late 1980s, Riley and his group have earned a reputation as one of the premier bands playing the traditional Cajun repertoire, bringing the old songs to enthusiastic audiences in dancehalls and on stages around the world, and more recently writing original material that carries the tradition forward. Their interpretation of the minor-key “La Danse de Mardi Gras,” one of the oldest Cajun songs, shows how powerful and plaintive this music can be. Source: Louisiana Spice: 25 Years of Louisiana Music on Rounder Records, 1995.

WWOZ   The diversity of Louisiana-based musics.