When Terminal Station was first built in 1905, it was among the largest railroad stations in the country. Its shed was an engineering marvel of size and space, it measured 745 feet in length and 265 feet wide. Its towers rose eight stories in the air and were built after the Spanish Renaissance style. In 1925 the shed was demolished to make room for more traffic, and in 1940 the towers were shortened to 5 stories in height due to threats of lightning. The station was demolished in 1971.

We created this 3D model to represent Terminal Station when it was first constructed and was considered an achievement of modern engineering. It is shown in Google Earth in its original location, which is currently occupied by the Richard B. Russell Federal Building, the headquarters for Norfolk Southern Railway. Click on the .kmz file below to download the file and open it in Google Earth. You can see the relationship the station used to have to the layout of Atlanta, the train tracks and the wye, and the interlocking tower which still exists today.

Because no plans or measured drawings of Terminal Station exist today, this model was created using historic maps and photographs, as well as measurements taken from a newspaper article boasting a plethora of facts on the station when it opened on May 14, 1905 [1]. While it is not an exact replica, we hope its conceptual nature gives scholars a better idea of the magnificence it displayed for almost 70 years. 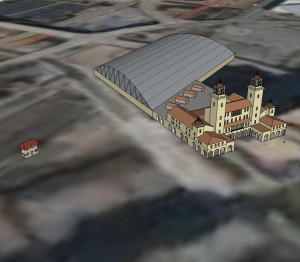