The Terminal at the Wye, Historical Geography, and a Possible Afterlife

The Wye of Downtown Atlanta

A wye is a railroad track configuration in which two or more lines come together in a triangular, or “Y” shape. The Circle Wye lies in the middle of Atlanta’s original downtown, and explains the why of the city. Why does the city sit where it does? The Circle Wye was built in 1846 when the Macon and Western Railroad’s Macon-Atlanta line reached the Western and Atlanta line from Chattanooga and the Georgia Railroad, coming from Augusta. The City of Atlanta was incorporated the next year. A few generations after that, Terminal Station rose at the Circle Wye, a portal into the city for passengers and freight. The station presided over the junction for nearly three quarters of a century, until rail’s long decline sealed its fate. 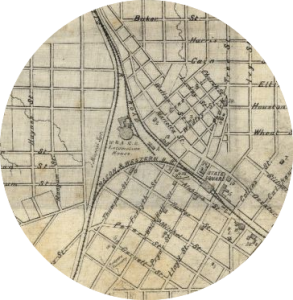 The Atlanta Preservation Center calls the wye “The Shape that is the Heart of Atlanta” and it advocates that “the unique shape and history formed by these railroad lines…be kept intact and honored with future designs of the site.” What the Center has in mind is the proposed Multi-Modal Passenger Terminal, planned for a site on the wye adjacent to where Terminal Station once stood. The Circle Wye helped bring the city to life and it may yet revive its downtown from the slowly debilitating effects of suburbanization—a process different by a different sort of transportation. 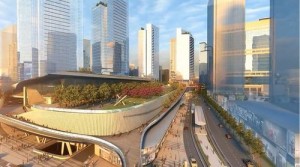 Created as an Emory University class project for ENVS 385: Visualizing the City