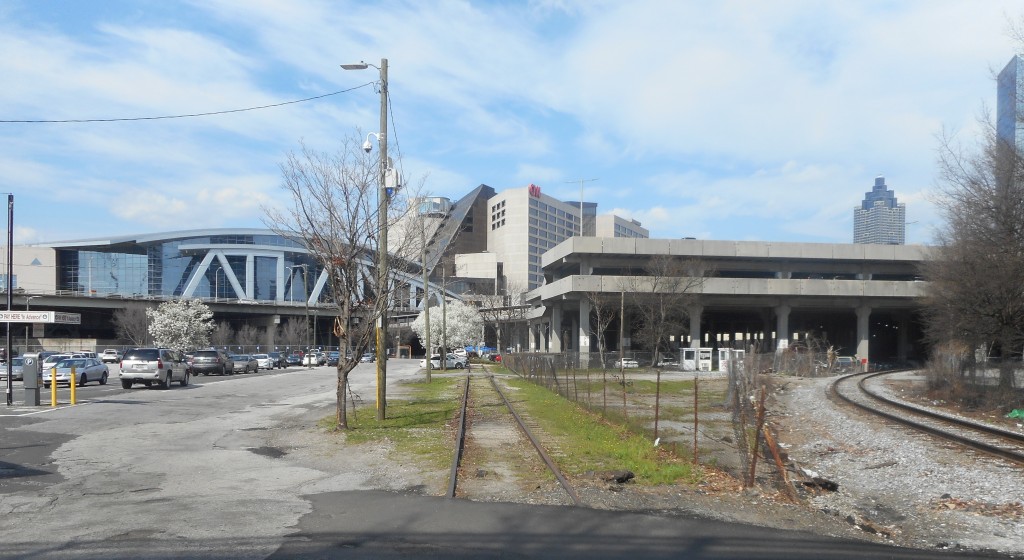 Looking north from the gulch. Richard Russell Federal Building is out of sight on the right. Photo by Tom Rogers, 2015.

“The most planned quarter-mile in town.” This distinction supposedly belongs to Atlanta’s downtown railroad area, the erstwhile home of Terminal Station. Often called “the Gulch,” the size and shape of this area depend on the eye of the beholder.[1] Just the railroad tracks and parking lots bounded on the east by the Sam Nunn Federal Building and by the Philips Arena on the west? The entire line of tracks leading from Interstates 75 and 85, past Underground Atlanta, past Five Points Station, to the CNN Center? This zone, according to Central Atlanta Progress, amounts to roughly 94 acres and corresponds to that group’s proposed Green Line.[2] Or does the Gulch comprise the entire Green Line strip and the tracks leading south along Spring Street away from the Nunn Federal Building? 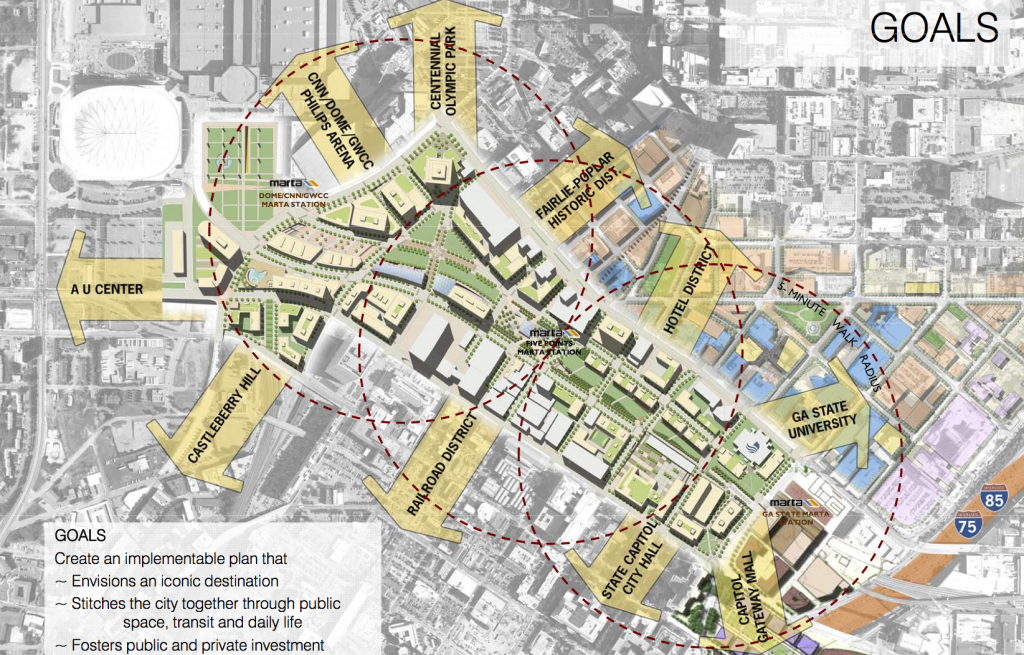 Whatever its precise boundaries, the Gulch has been the target of development plans for more than a century. In 1909, architect Haralson Bleckley proposed building a new City Hall there (the current Hall, near the capitol, opened in 1930). As rail travel declined, so did the area around Terminal Station. The station’s 1970 destruction only sharpened the decline. Not surprisingly, plans for a new approach to the site proliferated.

Between 1950 and 1980, architects and investors proposed at least twelve schemes for the area. Most had some aspiration of gluing downtown into an integrated whole. In 1982, the Atlanta Journal-Constitution declared that the Gulch broke downtown in half, with an office-hotel-convention district to the north and a government-university district to the south.[3] That characterization remains broadly accurate. The development of Peachtree Center dragged downtown’s center of gravity northward and likely sapped momentum and energy from attempts to develop the Gulch. 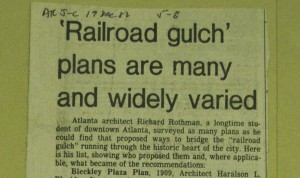 Energy returned in the early 1990s, with the reinvigoration of an old idea. Terminal Station and Union Station had welcomed passengers to the Gulch until their simultaneous demise at the beginning of the 1970s. Local planners proposed a new transportation hub, one that would combine a newly redeveloped passenger rail network—regional and national in scale—with MARTA rail, MARTA buses, and intercity buses. The idea acquired the label “Multi-Modal Passenger Terminal” (MMPT). The MMPT has now weathered a quarter century of discussion, public debate, and active planning. Property has changed hands, architects have produced detailed plans, and millions of public dollars have been spent. No new transportation hub has yet risen in the Gulch.

Three periods in the MMPT’s history, and analysis of its failure:

[3] “‘Railroad gulch’ plans are many and widely varied,” Atlanta Journal-Constitution, December 19, 1982, courtesy Atlanta History Center. This article listed all of the plans, crediting a local architect named Richard Rothman with collecting them.