The classic argument on learning/experience: what has a bigger influence over an individual’s life, his genetics, or his up-bringing? In Sigmund Freud’s “Outline of Psychoanalysis”, he seems to favor the latter.

Within one’s brain, Freud feels that there is different “psychical agencies” that control ourselves. This includes the id, a primal desire that drives us to achieve basic urges; the super-ego, a sort of moral compass; and the ego, a development from the id that analyzes the simultaneous needs of the id, superego, and the stimuli of reality in order to synthesis choices. 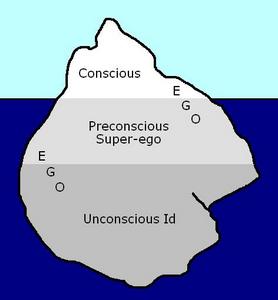 Freud explains that the id is inherent in everyone, as we inherit it from birth. The super-ego and ego, on the other hand, are influenced by more personal experiences. “The long period of childhood, during which the growing human being lives in dependence on his parents, leaves behind it as a precipitate…[the] super-ego”(146). In this case, the super-ego comes from our childhood, and is influenced based on parents, or lack thereof, as we will see later on. As for the ego, near the bottom of page 147, he elaborates on the origins of the ego, “the ego is principally determined by the individual’s own experience, that is by accidental and contemporary events”(147). The ego, as explained before, is a synthesis-center of the id, super ego, and outside stimuli, therefore it is fitting that it is affected by personal experience.

Freud then takes a step back in Chapter 9 of the work, using the super-ego as an example. “the super-ego often displays a severity for which no model has been provided by the real parents”(205). What he means by this is that the super-ego has can still be developed even with the lack of parents, using the tale of Oedipus and the Oedipus Complex as evidence. If this is also possible, then there is no definitive stance that Freud takes on the issue.