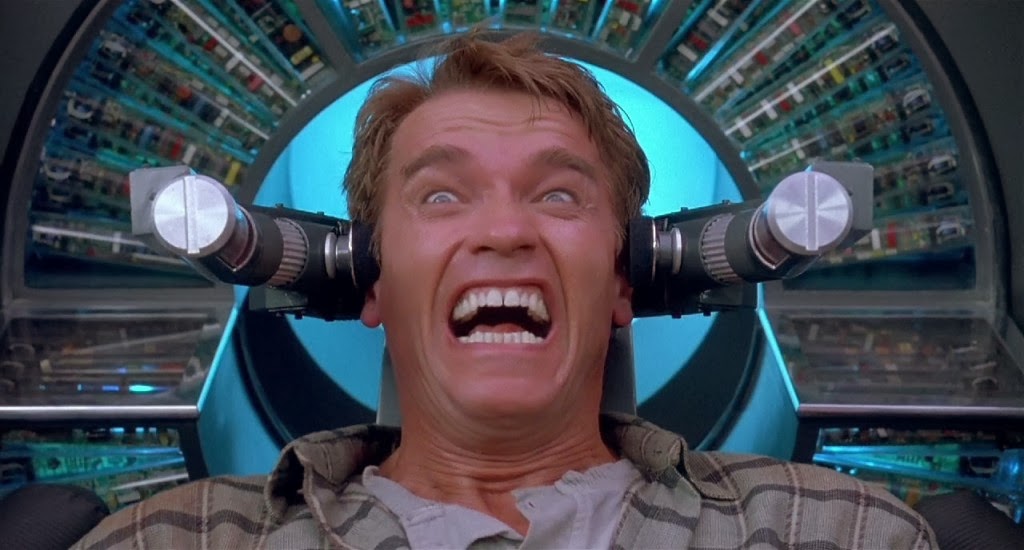 GET TO THE CHOP–Whoops wrong movie

In the movie Total Recall (I’m referring to the original 1990 movie starring Arnold Schwarzenegger, haven’t seen the more recent remake), the main character Douglas Quaid wants to go on a vacation to Mars but he cannot afford to physically transport himself. Instead, he opts to go to a company called Rekall that will allow him to receive a brain implant that makes him believe that he went to Mars.

The rest of this blog will contain unmarked spoilers, so let the reader beware.

During the operation to get the memory transplant, something goes wrong and Doug receives painful shocks. Once he goes home, he sees that what he believed to be his life is all a sham, as his supposed wife is a secret agent working against him. Doug finds a recording from the future that he is a secret agent called Hauser and that he erased his memories in order to protect himself from a conspiracy. Doug goes to Mars to find out more about the conspiracy. Once he arrives, he goes on an adventure that reveals a secret device that can provide breathing air for all the residents, thereby bringing peace among the settlers and the Martian natives. Doug is able to release the device but in the last scene of the movie he asks himself if this was all a dream. Were his efforts to save Mars just a highly sophisticated memory implanted in his brain?

This brings me to the philosophical part of this blog post, where I found a connection between Doug’s memories and Locke’s view of identity. Locke argued that if “consciousness” was maintained by a person, then the identity of the person stays the same. He states the “consciousness can be extended to backwards to any past action or thought”, which means that one is able to recall past memories and actions (335). However, this also exposes one of the holes in Locke’s theory. A famous scenario called the breakfast problem asks that if I can’t remember what I had for breakfast yesterday, I was not myself during breakfast time yesterday. In Total Recall, it is not truly known whether Hauser truly existed or if he was a memory implanted into Doug’s brain. If Doug cannot make a distinction between a dream and reality, is he truly himself? I personally believe that Doug’s adventure was a dream and he either woke up or died after the movie ends.

My external source is not related to the movie, but it is a song I have been listening to while writing this blog post. It’s called “Is It Real?” from one of my favorite shows Cowboy Bebop. It ponders on reality and what can be done to prove my existence and whether the world around me is real or just a figment of my imagination.