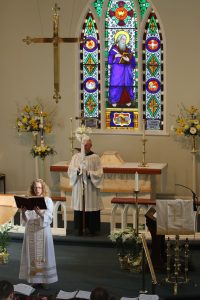 Christians come together as the Body of Christ to praise and worship God; to learn from Scripture and traditions of the Church; to share in the Holy Eucharist and prayers; and to build community. Good worship not only attains these goals, it also prepares Christians to go into the world and live as witnesses to their faith. As James K. A. Smith says, “The capital-L Liturgy of Sunday morning should generate lowercase-l liturgies that govern our existence throughout the rest of the week.”1

Many priests and pastors find themselves in a conundrum when worship services seem to be successful in the Sunday morning setting, yet do not appear to generate the desired weekday connection. This may be especially frustrating when participation is minimal in ministries such as Bible study and Christian Formation, which are designed to enhance the correlations between Church on Sunday and everyday life.

In this project we created thematic worship events that integrate an alternative worship service with Christian Formation.   Each event was offered as a complement to traditional worship, was developed and led by lay people, and was given a framework by the priest or pastor. Each worship event was based in a subject the group of lay leaders love, and in which they find a connection with the Holy in their everyday lives.

The intention is that the worship events provide a way to change the culture of the Church without harming the existing good, resulting in transformation. The process would: engage people in identifying something they loved; help them either affirm or shift their perception of the part of their lives where they encounter God; provide a distinctive environment in which they could share their experience as part of a worship event; and integrate worship and Christian Formation in a way that attracted the interest of others and revitalized faith, particularly as it is lived on an everyday basis. By having lay people lead the event, it would demonstrate the many ways in which ordinary talents, abilities, and interests could be understood as spiritual practices and be used to deepen faith, glorify God, and reach other people.  The worship events were named Finding God In… to highlight the myriad ways in which people might encounter God in their everyday lives. 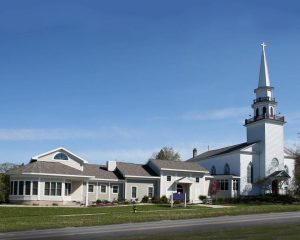 The project was carried out in an Episcopal church in Upstate New York.  The parish is near Syracuse and reflects the village demographics as over 90% white, middle and upper middle class, and well educated.  The average Sunday attendance during the program year is about 100 people.  The project began with an explanation of the premise, along with asking members of the congregation to volunteer to speak about their experience of finding God in something they loved. In response to a parish email, newsletter article, announcements, and personal conversations, a number of people volunteered.  Groups were formed for music, nature, and service to others in response to the three topics in which the most people had expressed interest. These groups became the leaders for the worship events.

A parish survey was distributed in order to test the initial observations of happiness with traditional worship services, sense of connection between worship and daily life, participation in Christian formation, and level of comfort in leading or participating in ministry. The questions were refined based on the initial responses and used as the foundation of subsequent surveys that followed each worship event, with one set for the leaders and another for those attending.

The project tested whether people are willing to share what they love as a way to connect with God once they better understand this dynamic themselves, and whether others would be drawn to listen based on an interest in the topic and a desire to support the presenters. Often people are not motivated to participate in a regular adult Christian Formation class, a problem echoed poignantly by The Rev. LeeAnne Watkins in a video entitled “The Way We Do Formation is not Working.”2

This project, however, would be a new approach based in either something that interests them or someone they care about. The Rev. Jeremy Lewis said, “People may not care about what you want them to care about. All of us love, so ask the question differently: What do you love?”3 The project is based in the idea that beyond the traditional setting of Sunday morning worship, people are particularly open to the Presence of God, or to an experience of the holy, or a sense of wonder or awe, when they are engaged in doing something they love.  The hope was that in creating a process that allowed individuals to participate in a group of similar interest in which these resources were made available to them, they would expand their capacity to experience the connection between God and their everyday lives.

Worship teams worked collaboratively, affirming gifts and sharing their experiences of awe, wonder, holiness, and the presence of God. The term ‘curation’ was used to describe the priest or pastor’s task of listening to the stories of others; praying with them; envisioning how their individual contributions might fit together into a cohesive flow; and suggesting biblical texts, theological perspectives, and other ideas to create a framework for the worship event. The concept captured in the book Curating Worship comes from Jonny Baker, who says, “A worship curator makes a context and a frame for worship, arranging elements in it. The content is provided by other people.”4

Finding God in Music5 was the first worship event. The team was comprised of seven parishioners who played instruments, sang, invited friends to sing with them, read poetry, and one who wrote a reflection on the importance of music in her life.

The second service was Finding God in Nature6, which also involved seven people from the church: two gardeners, one hunter, three mountain climbers – two of them also campers, and one who loves spending time in nature.

Finding God in Service to Others7 was the final team. The five volunteers were mostly introverts and initially had difficulty envisioning what they did as anything special. One woman often volunteers to help others in behind the scenes ways. Three had done extensive mission work. One spoke of his interest in how people in many faiths serve others.

The excitement, creativity, and confidence generated among the worship leaders as they prepared for and participated in the events affirmed the premise that, given an opportunity, encouragement, and resources, people could grow to see the connections between God and their everyday lives. The surveys distributed among the leaders bore this out. One woman clearly showed a significant shift in her perspective. Before the Finding God In… worship events she was quite happy with the traditional services. When asked about living out her faith during the rest of the week she said, “I had never really thought about my faith outside of the church service and formal prayer. It never occurred to me that there are other ways to be with God.” Because helping lead the music worship event is similar to what she already does professionally she wrote, “The change for me was after attending the Finding God in Nature service and seeing all the ways I can/am making spiritual connections and experiences that I never realized.”

According to the surveys following the services, a large number of people found themselves changed by the sharing of others. One person expressed this beautifully: “It was a chance to get to know their stories as well and they ALL brought fascinating insights as to where and how they found God…It opened my eyes up to see how many ways I could find God that I had not yet considered.” The surveys given to those who came to each worship event showed that, as thought, the majority came either because they were interested in the subject or wished to be supportive. The surveys asked whether the event influenced attenders’ perspective on the focal topic and the potential for finding a connection with God. The responses were overwhelmingly positive. People who already loved the subject also expressed affirmation. Several people in each survey mentioned that were prompted to new action or a new interest from the event. Finally, each group had a number of people who confirmed that the service helped them imagine a connection to God in their everyday lives through something they love, including: “I will look closer to finding those events in my life, or looking at those different things I do in a better light towards God” and “It has encouraged me to look at love and my relationships differently.”

The level of energy and enthusiasm following each event was remarkable, a number of parishioners requested that Christ Church to have more Finding God In… worship events, and people volunteered to lead and support them. Among the people who attended the worship events and completed surveys 16 (59%) of those from Finding God in Music said they had experienced a changed perspective on the relationship between music and finding a connection with God or finding a connection with God in their everyday life through something they love, and 10 (37%) said it affirmed a connection they already felt. 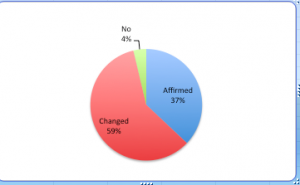 The surveys from Finding God in Nature showed 11 (58%) people experiencing a positive change in their understanding and 7 (36%) feeling their perspective affirmed. 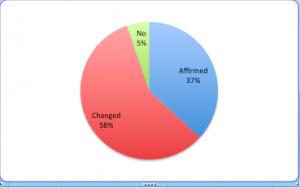 Lastly, the surveys from Finding God in Service to Others indicated that 9 (81.81%) respondents had experienced a positive change in understanding. 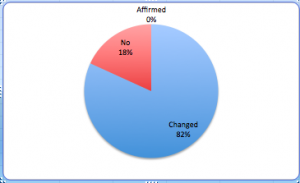 Finding God In Service to Others Survey Responses

The next step for Finding God In… worship events is to follow up with those who have volunteered to participate and to invite others based on something they love. While it is time and energy intensive to hold an additional worship event each week, it would be sustainable to either have one per month, one per liturgical season, or to have several during a particular liturgical season such as Epiphany or Lent.

2“The Way We Do Formation Is Not Working,” Episcopal Story Project, accessed March 14, 2017, https://www.youtube.com/watch?v=AKCcWegiC-E.