This post serves as a very brief review and executive summary of Rev. Adam Roberts’ Doctor of Ministry project and paper, “Doing the Work of Well-Being with African American Males at LaGrange College:  Identity, Context, Rage and Construction,” submitted in March, 2017.

While this post is in no way comprehensive of that work, it seeks to briefly and faithfully represent the problem, research and outcomes of the project.

This Doctor of Ministry program has emphasized the need for deep understanding of context as a key driver of effective leadership.  A deep dive into the history of LaGrange, Georgia quickly reveals the themes of oppression, racism and inequality that are prevalent throughout many similar towns in the old “slave belt” of the deep south.  Further exploration revealed the role of paternalism rigid social roles that arose during the “mill village” days of the late 19th and first half of the 20th centuries.

In the fall of 2016, I invited Mr. Rob Dicks (NCAA Compliance officer and head of Athletic Training) to join me in mentoring a group of African-American male students.  The video below is a great introduction to Rob, and his heart for servant leadership and student well-being.  It also represents his ability as a boundary leader across multiple campus constituencies:

Thinking about the challenges faced by African-American men at LaGrange College quickly led me to the work of Candler School of Theology’s Dr. Greg Ellison.  Greg’s book Cut Dead but Still Alive perfectly captured much of what I perceived in the young African-American men that I sought to engage.

Here, he discusses the reality of “invisibility,” and the rage that experience produces:

This project was conceived as a way for me to align my work as Chaplain of LaGrange College with the needs and lives of the young African-American men who attend there.  My goal was to not “cut them dead,” but to fully see them, and to be fully seen and known.

Such work is not easily accomplished across racial divides in our culture.  In his landmark book, God of the Oppressed, James Cone said that, “[w]hite people must be made to realize that reconciliation is a costly experience.  It is not holding hands and singing ‘Black and white together,’ and ‘We shall overcome.’ Reconciliation means death, and only those who are prepared to die in the struggle for freedom will experience new life with God”1

If I was to be a leader in this work, with this group of students, such “death” would mean extreme vulnerability, which began as honest conversation about my own identity, as an invitation to the group to practice such vulnerability with one another.

Rob and I entered into this group of 7 young, African-American men between the ages of 18 to 22 years old, and journeyed with them through an exploration in four parts:

We began the practice of vulnerability with my own discussion of the racist identity my Jim Crow era grandparents had passed on to me in my childhood.   I shared this video, beginning at 13:08, with the group, as MLK spoke of “Jim Crow” being fed to poor whites beginning in reconstruction after the Civil War. 2

Acknowledging the reality of my own experiences with privilege and power and admitting my vulnerability to participating in racism world views and structures opened the door to authentic conversation and began to build trust and credibility between myself and these men.  In turn, Rob and the student participants shared their own experiences as well.

Our second session detailed the social history and present realities of life in LaGrange, Georgia and on the LaGrange College campus:

The next session (again on context) physically took the group to many of these historical sites for a practice of contemplation through lectio divina and “looking and listening” to the sites and sounds of the blocks surrounding the LaGrange College campus. 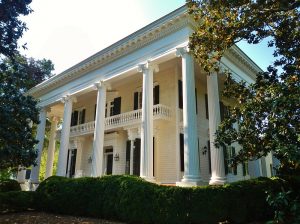 Bellevue Mansion (plantation). LaGrange, GA, ca 1840’s. The iron gate that stood outside this home of US Representative Bejamin Harvey Hill was moved, in part, to the LaGrange College campus around 1915. “Bellevue (LaGrange, Georgia) by Datai is licensed under CC BY 2.0 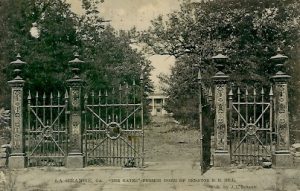 The iron gate of Bellevue Plantation, photo ca 1915. This gate stood at Broad Street at the present day Ben Hill Drive. Two of the iron uprights and finials were moved to the LaGrange College campus and incorporated into a new college gate shortly after this photo was taken. 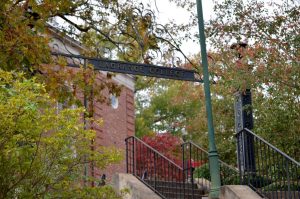 Iron uprights and finials from Bellevue as they stand outside the LaGrange College Chapel at campus entry today. Roberts, A. “LaGrange College Gate and Chapel.” 2015. Unpublished. 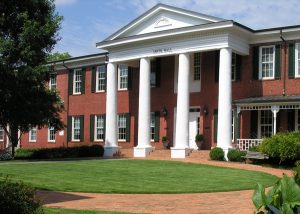 Smith Hall, originally build as plantation home, 1842 by enslaved laborers. This building is on the National Register of Historic Places, and has served as a primary classroom building throughout LaGrange College’s history and continues to serve today. “College Home-Smith Hall” by Tiedosto is licensed under CC BY 2.0 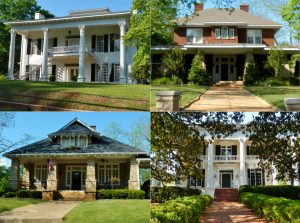 Fine homes in the Downtown Historic District contrast markedly with old mill village houses that are still rented to the poor of LaGrange today. Troup County, Georgia scores as one of the highest income inequality counties in the US. Roberts, A. “Downtown Historic Homes of LaGrange, GA” 2016. Unpublished. 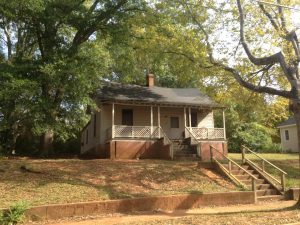 Being invisible engenders rage.  The question is always present:  what will we do with that which is not right?  Rage must be given voice, and the energy moved into the positive work of “construction.”  Without acknowledgement, invisibility births the “wicked fruit of rage.”3

These young men taught me that their rage was found source in being ignored (and in history being ignored) and in the fear that they face on a daily basis (of which I was largely ignorant).  The iron gate from Bellevue became a touchstone for their rage and a central point of debate.  What should be done about it?  What can be done to address income inequality and racism in LaGrange, Georgia during our undergraduate years?  Is it safe for me to travel alone in this town?  What if the local white population sees me as “just another poor black boy?”

“What should we do,” eventually became, “what can we build?”  Here, it was important to assess the good things already happening in the community and extend the hopeful possibilities that these young men might join in the work already being done by like-minded LaGrange citizens.

To that end, I introduced the group to the work of “Troup Together” and the “Racial Trustbuilding Initiative” undertaken by leaders like our Mayor, Police Chief and President of LaGrange College.

The students were able to attend a LaGrange event that came from this process, a public apology for the lynching of a young black man in 1940.  The New York times covered this event, and many have said it may be unprecedented in US History.

These young men are now taking steps to greatly grow this project and push LaGrange College toward the forefront of continuing change in the town.  A dozen more African-American male students have stepped up to join what is now being called the “African-American Male Initiative” at LaGrange College, with plans to add many more this fall.

One of my pilot project members has led the way in studying the University System of Georgia’s “African-American Male Initiative” program.  A full-time black, male, LaGrange College faculty members has come on board with Rob and me as another member of the advising team, as well as our full-time, black female counselor.  Together, we have been in conversation with instrumental leaders of the Georgia University system’s efforts, and we are developing a program of academic support, emotional support, peer-to-peer relationship building and leadership development.

In addition, these young men from LaGrange College will now serve as mentors themselves, having taken the initiative to connect with an African-American, LaGrange College alumni who leads a mentoring program at the local alternative high school for at-risk teens.

We have seen significant increase in well-being for the young men who joined this effort in the fall of 2016 at LaGrange College.  They are working to construct positive contributions to the college and city communities in the future.  Vulnerability, authenticity, listening and “seeing” were the primary contributions I made as a leader in this process.

As “Keith” (name-changed, sophomore) told me, “Chaplain Roberts, you have taken the time to listen to us and really understand.  It means more than you can ever know.”

2 Replies to “Doing the Work of Well-Being with African-American Men at LaGrange College: Identity, Context, Rage and Construction”