How can an affluent congregation build friendships with persons living in poverty in their neighborhood? First United Methodist Church serves the mission field of Monticello, Arkansas, a county seat town of 9,700 people in the heart of Southeast Arkansas. Like many historic county seat congregations, FUMC experienced transitions in the demographic makeup of people living in nearby neighborhoods. When the congregation moved to their current location, it was in the heart of town. In 1961, a new state highway bypassed the town center, drawing community development west. Wealthier families in the community migrated to the new neighborhoods around the country club west of town. Today a higher number of families living within one-half mile of the church facility live under the poverty level than in the community at large.[i]

When I moved to Monticello two years ago, members of the congregation expressed a desire to connect with families living in nearby neighborhoods. The congregation had already placed a “Blessing Box” outside the Family Life Center. Neighbors began to frequent it as they walked through the church parking lot on their way to and from the grocery store next door.

In January 2018, two church members who help prepare and serve the Wednesday night congregational fellowship meal lamented how much food was going to waste. These two members – Ruth and Brenda – decided to reheat the leftovers the following day and offer free meals to anyone who would come.

Ruth and Brenda placed a sign on the Blessing Box inviting people to come to the Family Life Center kitchen on Thursday evening for a free meal. This was the birth of the Feed Our Neighbors ministry at FUMC Monticello. Ruth and Brenda hoped to serve a full “sit-down” meal. However, the neighbors asked for their meals “to go” so that they could take them and feed their families at home.

For the first year, Ruth, Brenda, and a handful of others prepared and served seven to ten meals per week. Over time, Ruth and Brenda began to develop a rapport with the few who came. They noticed when neighbors were absent and checked on them. They also began to establish relationships with others who frequented the church parking lot. Some of these neighbors became regulars.

Last summer there was a dramatic increase in the number of meals served as word of the ministry spread. Prior to the COVID-19 outbreak, the ministry was serving seventy-five to over one hundred meals per week. Brenda attributes the growth to three things:

The growth was welcome: more families were being fed. At the same time, it came with challenges. It was much more difficult for the servers to develop and cultivate friendships with the neighbors. Those who prepared and served the meal were also aware that differences in race – and more significantly – class made it difficult to build bridges between the two groups. 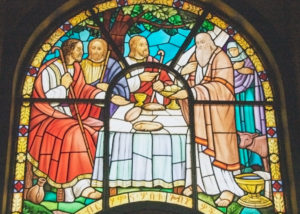 In the Bible, shared meals are often occasions for encountering God. One such encounter is in Genesis 18:1-15, where Abraham and Sarah extend hospitality to three strangers and meet God. Perhaps the clearest example is found in Matthew 25:31-46. Jesus says that when people feed the hungry and welcome the stranger, they have done it for him. As we share hospitality with others, we encounter Christ himself.

Each of the synoptic gospel authors portrays Jesus as breaking down barriers of ethnicity and class in his earthly ministry. Mark vividly portrays this in his narrative with Jesus repeatedly crossing the Sea of Galilee, with the “result of these voyages [being] that the lake loses its force as a barrier and is transformed into a symbol of unity, bridging the gulf between Jew and Gentile.”[ii] This bridging of physical, social, and ethnic barriers is also found in stories about table fellowship. While all four gospels relate stories about Jesus sharing meals with the marginalized, the Gospel of Luke brings those encounters front and center in his telling of the story of Christ. In Luke, Jesus shares at least ten meals with diverse people, from the highly devoted Pharisees and wealthy tax collectors like Levi and Zacchaeus to a man with dropsy.

In Food and Faith, Norman Wirzba notes the sociological and theological implications of Jesus’ table fellowship with the marginalized:

“Jesus rejects the social systems of rejection and exclusion by welcoming everyone into communion with him. Table fellowship makes possible genuine encounters with others.”[iii]

By eating freely with everyone – including tax collectors and sinners[iv] – Jesus created what Reta Halteman Finger dubs a “fictive kinship” group: a new family based not on ties of blood, but on shared belief.[v]

In the first century, eating together across social boundaries was a visible sign of who Jesus Christ was and what he came to do. For the New Testament authors – especially Luke and Paul – a regularly shared meal by people of differing classes followed by the Eucharist served as a prophetic sign-act, revealing both Christ’s identity and his reconciling mission.

In many churches, the communal meals we once shared across social boundaries have become potluck dinners shared among social equals.

Finger notes that as Americans, “we generally live with socio-economic equals and give a tiny percentage of our income to charity,” with the result that “The poor remain ‘the other.’”[vi]

Theorists use the term othering to “summarize subtle discursive practices and behaviors that create discrimination and exclusion by differentiating between those considered ‘us’ and ‘others’ and evaluating the differences as manifestations of the other’s essential inferiority.”[vii] Othering mechanisms include:

Over eight weeks, I worked with Brenda and her coworkers. Five people who make up the core group of servers participated in a small group book study of Friendship on the Margins: Discovering Mutuality in Service and Mission by Dr. Christine D. Pohl and Christopher L. Heuertz. The study was designed to help us cultivate better practices of hospitality and friendship with the people served by the Feed Our Neighbors ministry. This involved seeing and listening for specific behaviors (e.g. learning names, shaking hands, engaging in conversation) on the part of the servers, including me. It also involved helping the servers to see our own “othering” behaviors. To gauge changes in behavior, I conducted two ethnographic studies, one before and a second after the group book study.

The study group identified two obstacles to cultivating deeper relationships. First, the roll-up windows separating the church kitchen where meals are prepared from the large multi-purpose room where the meals are served were kept shut during the first observation. This formed a physical barrier between the servers and their neighbors, creating distance between the two groups and subtly stripping the neighbors of their personal identity. It may have also led to a sense of uncertainty about the food and its preparation on the part of the neighbors.[ix]

The second self-identified obstacle was that the work of preparing and serving the meal made it difficult for deep interaction to occur between the two groups. In addition to these self-identified barriers, some of us found it difficult to confront the possibility that our behavior might help to perpetuate the conditions that create poverty in our community.

The self-identified obstacles were addressed in several ways. In the second observation, the roll-up windows were raised. This simple action removed the physical obstruction between the servers and the neighbors. At the very beginning of the project, we discovered that one of our “neighbors” was delivering meals to others living in his apartment complex, who were unable to come to the church. “Henry”[x] has become a partner in the ministry. After witnessing a young man opening the door for other neighbors, we invited him to join the servers in the kitchen. By bringing him into the kitchen where the food is prepared, othering behaviors such as boundary-setting, distancing, rejection, and stripping personal identity were reduced.

The group also adopted a new method of taking orders, which included taking names along with the desired number of meals and drinks. This enabled those of us who take the orders to learn the names of the neighbors. As a side effect, the neighbors began to learn our names. In the months since the project ended, the relationships between the order takers and neighbors has continued to develop. It is common for neighbors who attend regularly to catch up with us and even to share prayer concerns when there is a need.

While these positive changes are encouraging, the deeper connections between server and neighbors were fairly limited to Brenda and me. Class barriers are difficult to overcome. This was true in the early church. Paul addresses class divisions within the church in Corinth where the wealthy members were gorging themselves on the shared meal and getting drunk on the communal wine, while the poor members went hungry.[xi] The early church was not foreign to class conflict in shared meals.

In the midst of this conflict, Paul discusses spiritual gifts. This is where I find hope for the future of Feed Our Neighbors. Paul asserts that there are many spiritual gifts, ministries, and activities, yet they are all empowered by God through the Spirit.[xii] If we are to serve as the Body of Christ, then we must respect and appreciate the diverse gifts within the body, including the gift of hospitality. Recently, I was pleased with the additions of two new servers who share the gift of hospitality.

The project came with several surprises. “Henry” started attending worship and joined a Sunday school class just before the COVID-19 outbreak. We also discovered more neighbors who, like him, are serving other neighbors. As a pastor, I have found much joy not only in getting to know the neighbors, but also by serving alongside the other servers. Several of us have been through seasons of loss and change. While the ministry was created to feed our neighbors, a by-product is that it feeds the souls of the servers and our own need for community.

Perhaps the biggest surprise of all has been the love that I as the researcher have come to feel for our neighbors as well as the other servers. We are becoming friends. We’re excited to see each other and greet each other by name at Walmart. We pray for one another. When one of us is absent, she or he is missed. When one of us experiences a loss, others hurt. Have we overcome class divisions through this research project? Not all of them. But as Brenda loves to say, “Baby steps.” 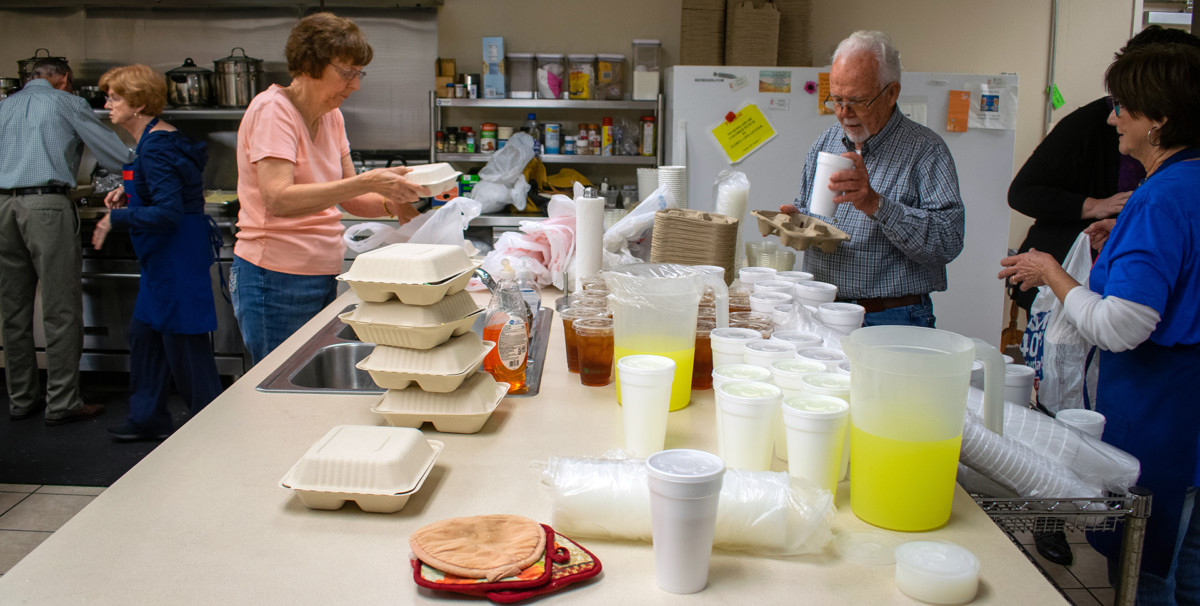 [x] For privacy purposes, the names of neighbors were changed for the purpose of writing up the project.

One Reply to “Sowing the Seeds of Friendship: Cultivating Hospitality Across Class Lines”