A growing demographic across the landscape of the formerly mainline denominations is the small membership congregation. While small churches are not a new phenomenon, the frequency of congregations with an average attendance of less than 100 continues to grow. One study examining over 20,000 United Methodist Churches revealed average attendance in those churches “dropped to 64 people in 2010, down from 81 people in 1990.”[1]

Small churches are tenacious. Some would call them tough. They do not give up when faced with impossible problems. Neither do they experience rapid shifts of membership. Over the years, some may grow and others decline. But they are particularly resistant to programmed intervention from outside sources.[2]

The Lynchburg, Virginia, metropolitan area has a population of 260,320,[3] and is not immune from the challenges plaguing greater Appalachia. A poverty rate of 22.3% reflects historical (and current) challenges: instantiated racism, ever-increasing opiate addiction numbers, dearth of adequate housing and lack of employment and sustainable wages for those who have, at most, a high school education. Boonsboro United Methodist Church (BUMC), situated in the foothills of the Blue Ridge Mountains, at the outskirts of Lynchburg, Virginia, is one such small membership church. Established in 1891, for its first decades it was part of an ever-changing pastoral charge of up to 4 churches served by one ordained pastor. The post-WWII boom increased the number of families with young children, and by the mid-1970s BUMC had their own full-time pastor. The church peaked in membership (375) and attendance (175) in the late 1970s but has been in decline ever since. Currently membership stands at 110, with average weekly worship attendance of 44. The congregation is historically white, and has a healthy age representation across all generations, from senior citizens in their 90s to young families with babies and toddlers. One long-time member characterizes BUMC as “just a little country church at the edge of a big town.”

One challenge of small membership churches is to how to measure missional effectiveness. Is mere survival sufficient reason for the small membership church to exist, and if not, what constitutes a thriving church of this size? Further, is it possible by means of an intentional innovation to shift a small church’s mindset from an inward preoccupation (conserving and self-protective), toward an outward orientation (expanding and self-giving)? Is it possible through a strategic innovation for the pastoral leader to help her or his congregation realize the transformational power of Jesus’ words in Matthew 16:25-26?

Because the small membership church is so impervious to change, any innovation requires both pastoral initiative, as well as congregational buy-in. This project identifies preaching as “the most important task of an ordained leader,”[5] and utilizes a specific approach, morally imaginative preaching, as the means to invite transformation. The beauty of this method is that the preacher need not completely restructure her sermon preparation process; rather, a series of five illuminating questions are added to the preacher’s existing preparation process. Popularized most recently by Frank A. Thomas in his How to Preach a Dangerous Sermon and his 2020 sequel How to Survive a Dangerous Sermon, preaching with moral imagination has deep roots. The concept of moral imagination fueled the work of the Rev. Dr. Martin Luther King, Jr., and sees contemporary modeling in, among others, the Rev. Dr. William Barber,ordained minister of the Christian Church (Disciples of Christ), who has popularized “Moral Mondays.”[6] 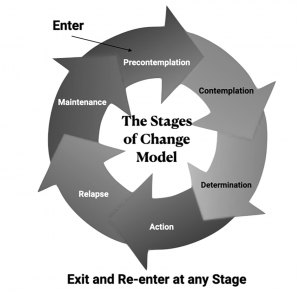 During a six-week sermon series, a selected group of listeners will respond four separate times through a standard survey instrument, designed to locate individual and congregational stages of change. The Transtheoretical Model (TTM), also known as the “Stages of Change Model,” frames this process. A unique feature of this project engages the preacher, week by week, to review change data to inform the succeeding weeks’ sermons. Based on the survey data, week by week, the preacher shapes his or her message to encourage deeper levels of change. At the conclusion of the sermon series, the preacher gathers with the participants to review their personal and corporate data, as a means of discovering how transformation occurs broadly, and how change has come specifically through the duration of the project. As a result of their change process experience, these congregants are now able to better lead the church toward its next faithful steps in becoming outwardly focused.

The global pandemic prevented the execution of this project; however, four anticipated outcomes are identified:

The Final, Decisive Actor: The Pastor as Preacher

If moral imagination is “the capacity to imagine something rooted in the challenges of the real world yet capable of giving birth to that which does not yet exist,”[7] then the small membership congregation is a fecund womb anticipating the new life that morally imaginative preaching instills. With a prime location (the small congregation) and an exciting innovation (morally imaginative preaching), there remains a final, decisive actor: the pastor as preacher. As the Apostle Paul queries in Romans 10, “How can they hear without a preacher?”[8] How indeed! Homiletics Professor Frank A. Thomas charges preachers with the task of preaching with moral imagination. “Dangerous sermons” need to be preached regularly from all pulpits. “If at least some of my sermons are not dangerous, I lose a piece of my integrity” (xxi). Thomas’ sequel, in which he guides the preacher to prepare “dangerous sermons” in strategic ways, to avoid undue discord while maximizing potential change benefits.