Bishop Kenneth Carder explains that United Methodist’s “connectionalism . . . is an expression of our understanding of the church as the body of Christ, with each part of the body having distinctive functions.”[1] The global UMC is 13 million people large, half of which resides in Jurisdictional Conferences and the rest in the Central Conference. These conferences are broken into Annual Conferences with episcopal leadership. 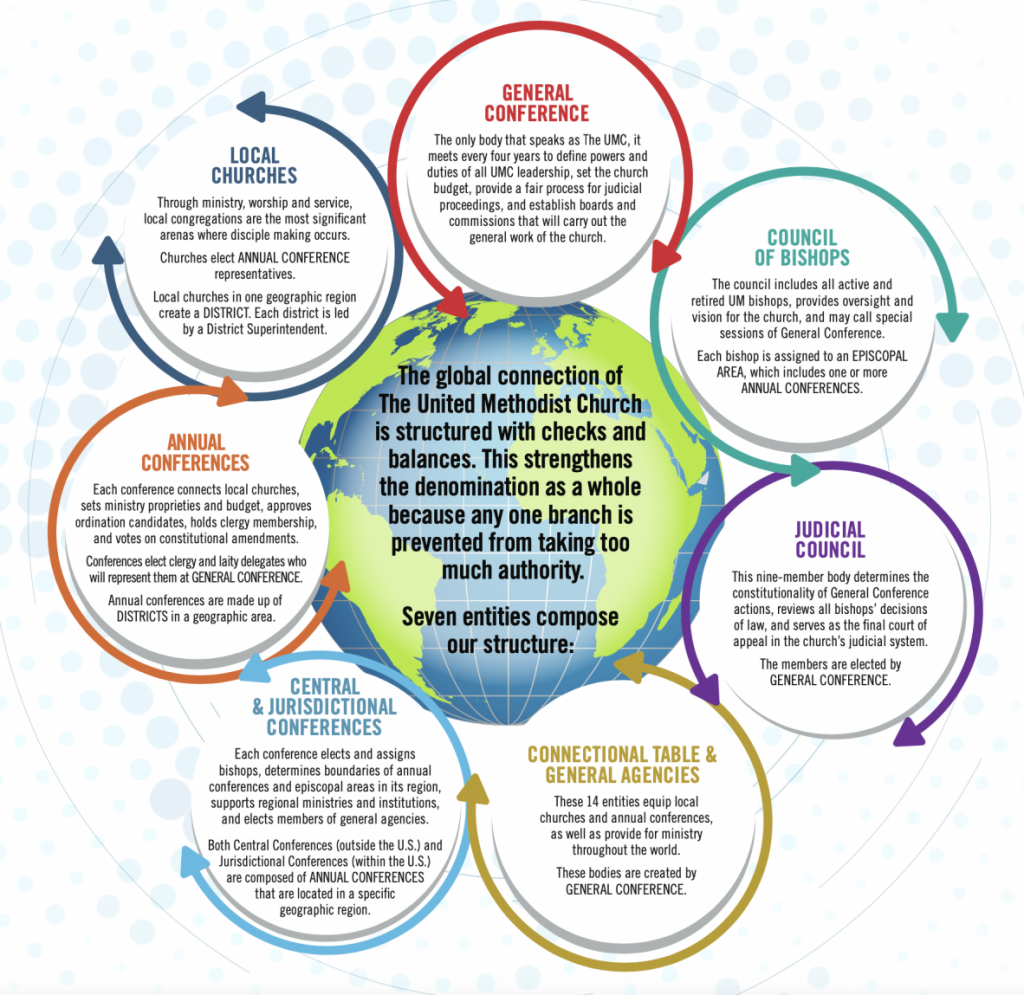 Annual Conferences are divided into Districts served by a District Superintendents (DS). 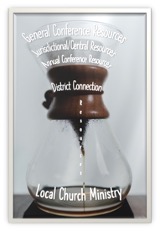 Districts are the point where all levels of the church and its resources connect to the local church in an effort to support the local church in making “disciples of Jesus Christ for the transformation of the world.”[2] Murray Leiffer, former professor of sociology, writes, “It is often remarked that no other office within the Methodist Church is more important to the functioning of the total organization. . .It is the district superintendent who is the vital link in what Methodist call their ‘connectional system.’”[3]

Additionally, in the early days of Methodism the Presiding Elder (DS) was seen as the crucial role that made revival possible.[4]The District’s job is to make sure that churches have clergy and laity who are prepared or have access to training and resources needed to do the work of the church.

While the district does work with churches who are facing a bleak future such as the one in the following video, the district works to understand and resource clergy and churches before they reach this point. 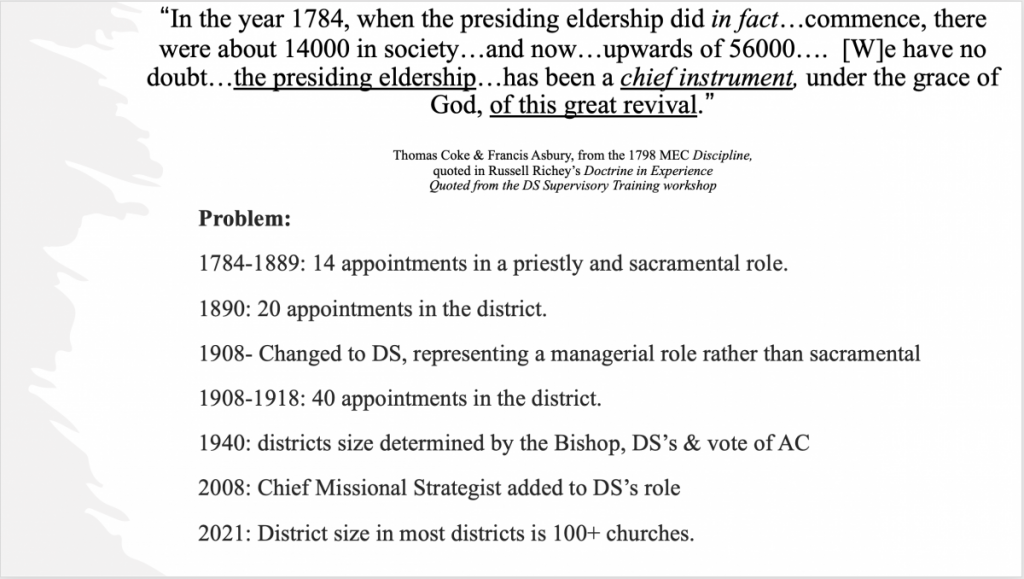 The number of churches and clergy the district superintendent is responsible to nurture, supervise and resource grew dramatically.

The district leadership structure has looked similar to the administrative council structure in the local church, as seen below. However, this is no longer an effective leadership. Without a different leadership structure of shared responsibilities[5] that is center around the current needs of the clergy and laity, churches will suffer and dissatisfaction in the connection will increase, unraveling the very fabric of our UMC. 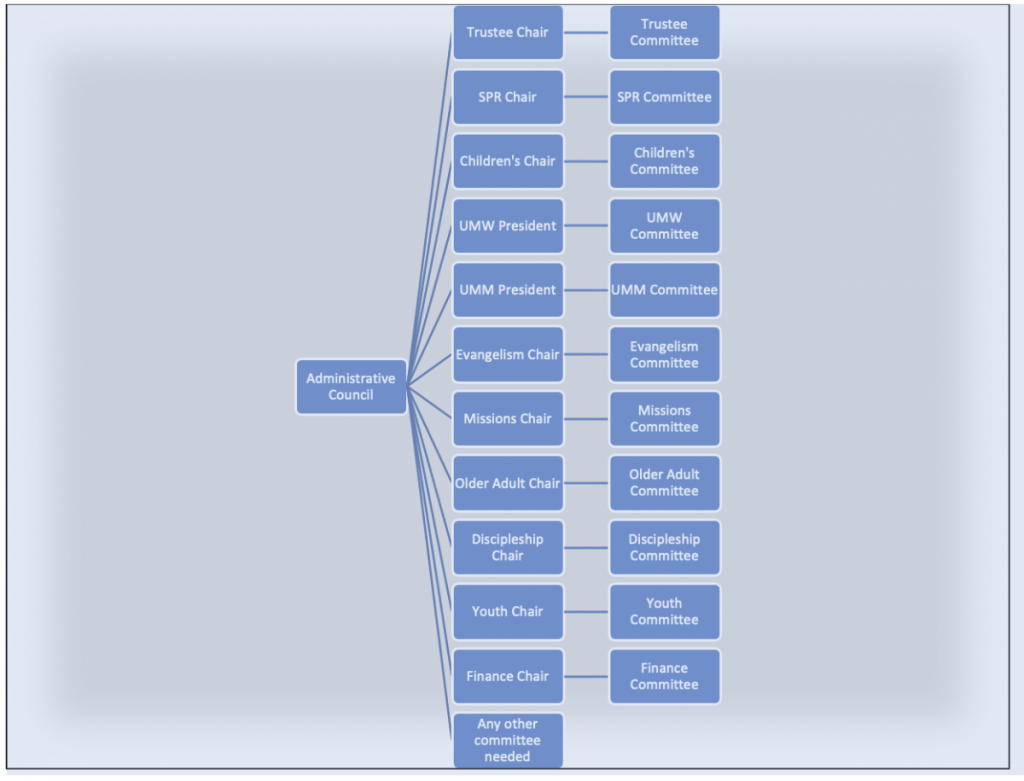 Below is the current district leadership structure in my context after redistricting in 2014. In nearly all districts, it was only partially implemented due to the high number of laity required for it to function, creating gaps in resourcing. 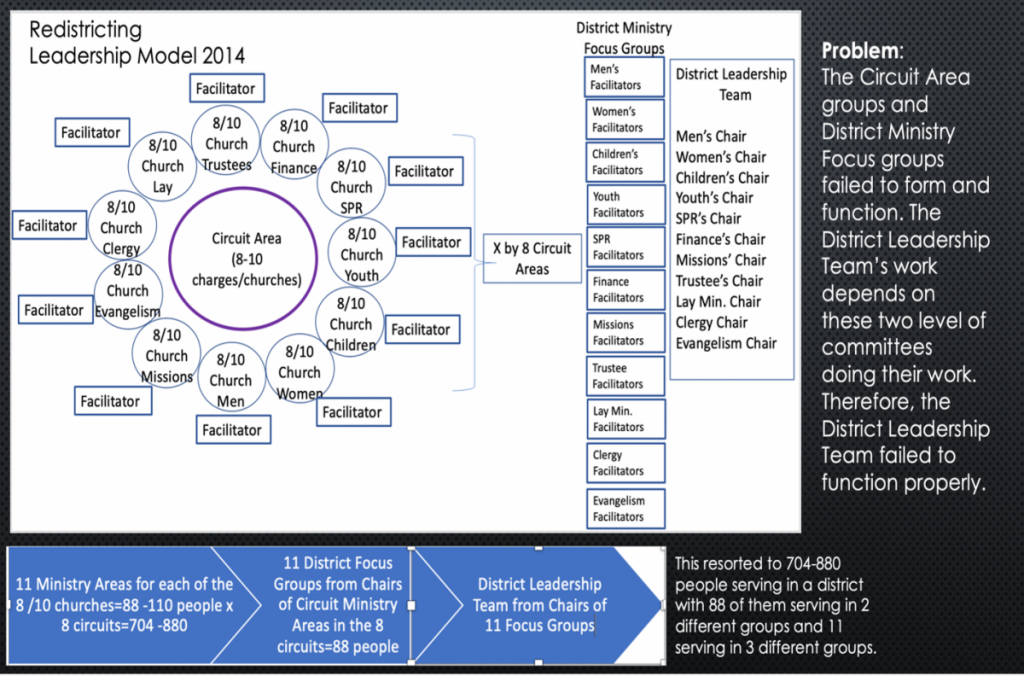 There is a need for the DS to reclaim their sacramental role while also fulfilling the role of chief missional strategist, who “empowers the congregations in the district to offer viable and cutting edge ways to proclaim the gospel to the community, their world.”[6] Helping churches ask missional questions about whether they are doing the right things[7] will help DS’s to be able to better understand the needs of the clergy and laity in their districts.

The best way to accomplish this is to create a shared leadership structure that does the following:

Research was divided into the following areas:

The picture below identifies the various duties of a DS.[8] Those within the two middle columns take up two-thirds of a DS’s time. Shared leadership among various district roles allows all the duties of district level ministry to be met. [9],[10] 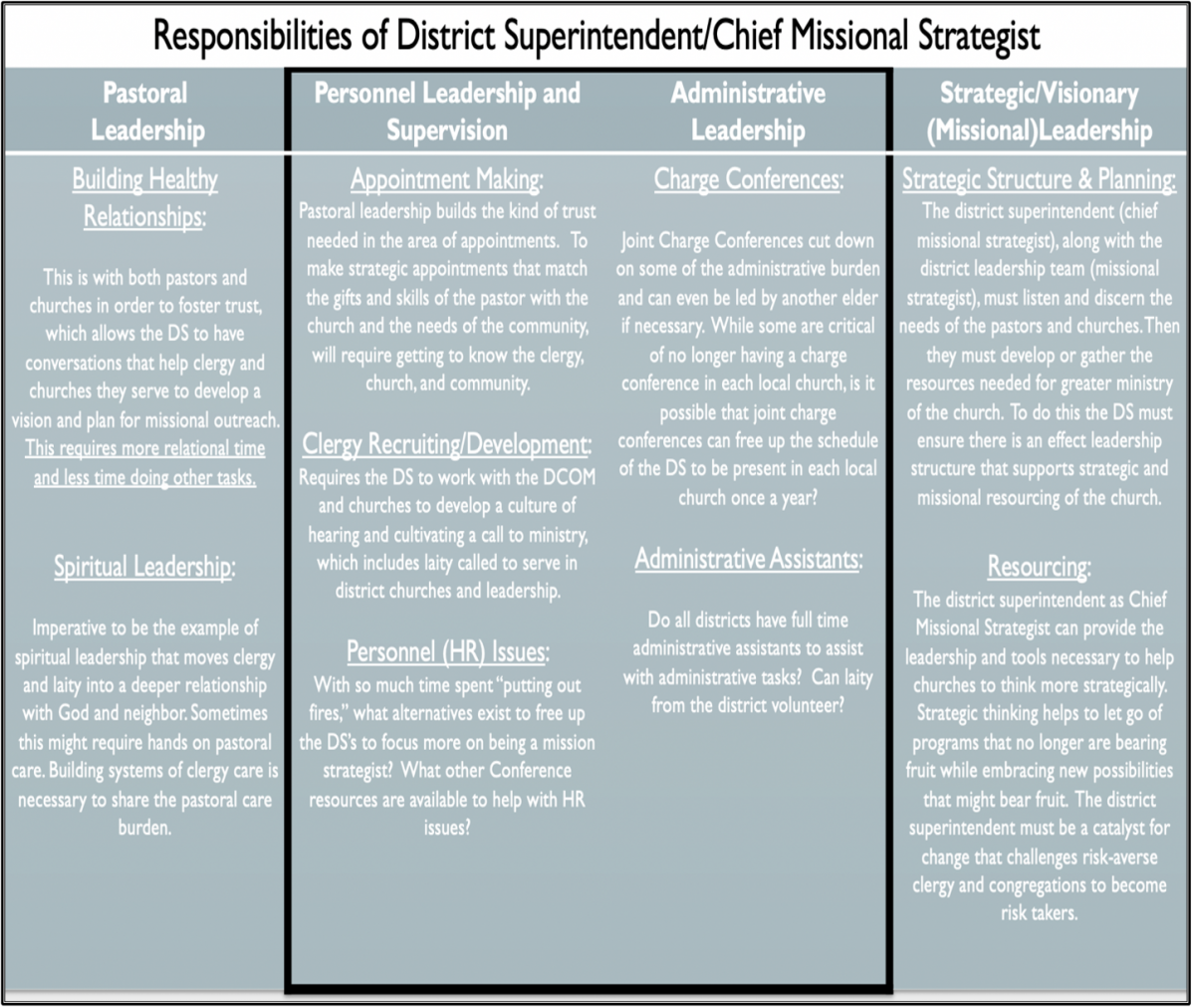 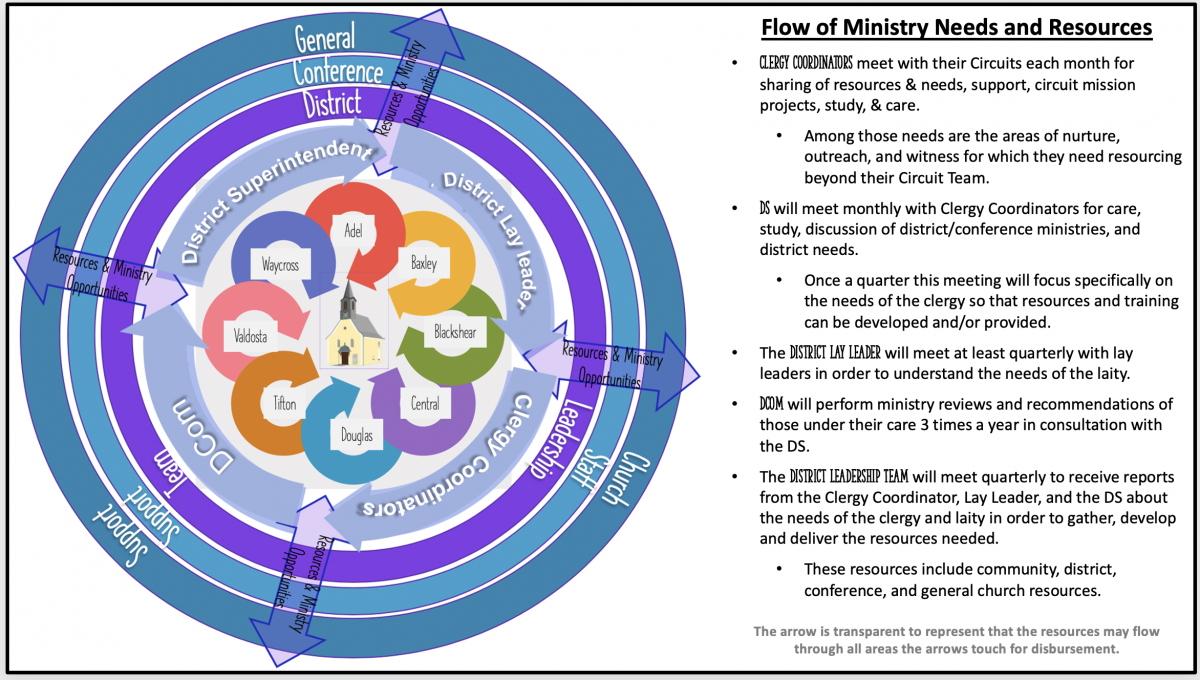 The main roles and their changes are as follows:

Clergy Coordinators: Clergy who have 8-10 clergy they oversee. Responsibilities include study, pastoral care, support, sharing of resources and needs among their clergy, and encouraging circuit mission projects. If needs cannot be met at the circuit level, the Clergy Coordinators inform the DS at their monthly meetings.

The DS and Clergy Coordinators’ relationship is of particular importance in this model. The DS will pour into these 8-10 leaders in the areas of pastoral care, study and support. They will in turn pour into their 8-10 clergy, a model similar to John Wesley’s class and bands.[12]

District Lay Leader: The Lay Leader meets quarterly with other Lay Leaders to train and understand the needs of the laity. They report back to the District Leadership Team at quarterly meetings.

District Leadership Team: Meets quarterly to hear reports from the Lead Clergy Coordinator, the District Lay Leader, and the DS about district needs. It is divided into customizable resourcing teams which are flexible enough to change from year to year depending on district needs. After the reports are given, each of these teams will spend time brainstorming appropriate resources and how to deliver them throughout the following quarter. After using the new process with the old administrative council model, I reorganized it to be nimble to district needs as shown below. 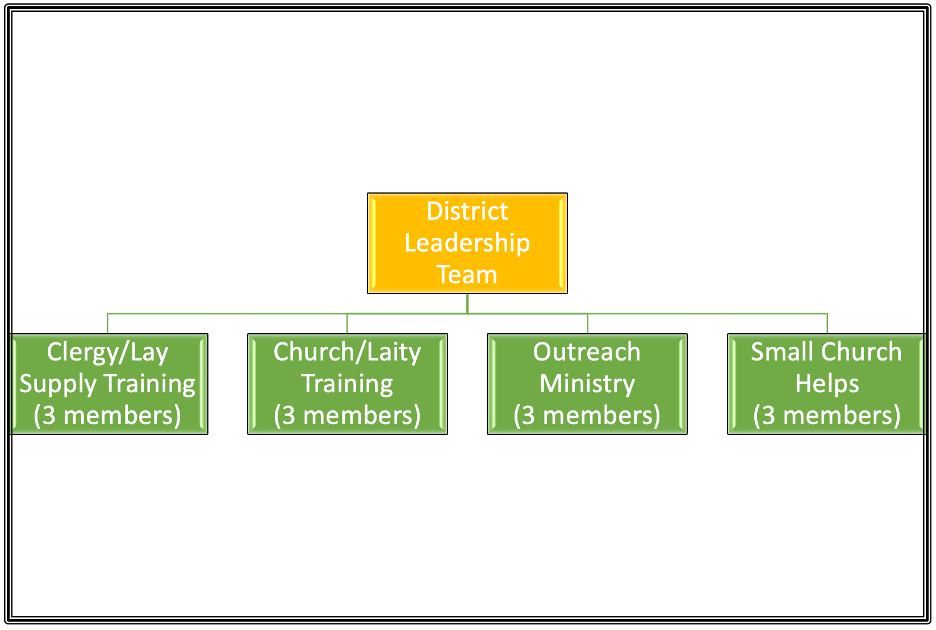 Coaching: Leaders using this resource in other conferences were interviewed and affirmed their positive impact.[13],[14] Coaching comes from the business world where 86 percent of all companies see a ROI.[15] Coaching journeys with the pastor and/or church in visioning, “developing a discipleship plan, goal setting, conflict resolution,” and more. [16]

Digital Resource Center: The following pages, adapted from the North Carolina Conference, are located on the district website. [17]

The District Superintendent is crucial to the success of this model. A cultural shift is needed in these areas:

In addition, all district level leadership must function as missional strategists who work and have substantive voice in leadership with the chief missional strategist, the DS. The principle of supportive relationships asserts that as people feel more valued and heard, their motivation to invest in an organization’s mission increases.[20] In this way, all the duties of district level ministry are met so that clergy and churches thrive in their mission to make disciples of Jesus Christ.

[6] Dana A. Everhart, “THE ROAD FROM PRESIDING ELDER TO SUPERINTENDENT TO STRATEGIST: WHAT LIES AHEAD?” (Atlanta, Emory University, Candler School of Theology, 2017), http://pitts.emory.edu/files/dmin/Everhart_2017DMinProject.pdf.

[8] Reist and Milford, The Book of Discipline Of The United Methodist Church.

[9] Yeager, Exercising The Gift: Called To The Ministry Of Superintending.

[16] Survey of Clergy and Church Coaches.

[19] Yeager, Exercising The Gift: Called To The Ministry Of Superintending.

One Reply to “Structured for Mission: District Connectionalism Simplified”