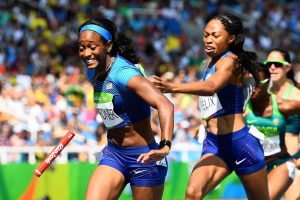 Allyson Felix, right, and English Gardner had trouble with their baton handoff in their first attempt at the women’s 4×100-meter race.

At the 2016 Summer Olympics in Rio the U.S. Women’s 4×100 relay team was disqualified during the finals qualifying heat when Allyson Felix dropped the baton after being bumped by another runner. She never made it to the handoff because she dropped the baton.  A few years ago while at a conference on church growth and leadership I listened as a co-pastor shared about her journey in ministry to get to the place of success where her church is thriving, and she is a sought-after preacher.  During the telling of her story towards the end there was a sharp turn as she shared with the conference crowd that her husband and partner in pastoring was ill with symptoms that manifest similar to Alzheimer and that she was now doing ministry “all alone”! The room was moved to tears as she began to explain that she was also facing a situation where she would be transitioning with no certainty regarding the security of the future of the church, they had given their lives to, raised their children in, and pastored for more than thirty-five years because she belongs to a denomination “that does not see the benefit of a transition plan”! The fact that there are still church leaders and denominations that do not consider the traumatic impact and potential fall out of pastoral transitions that do not include a fluid plan that takes into account the physical and emotional health of the exiting pastor, new pastor, and the congregation is extremely disheartening.

Her story time struck a chord with me as I thought about how many churches I’ve seen thrown into turmoil and chaos due to poor transitions, as well as the fact that I am at a church that will be transitioning a senior pastor in the next five years and many people are considering me to be the successor. So, while selecting a successor may be a part of establishing a transition plan it certainly is not in and of itself a plan. Therefore, throughout my project I worked to develop a framework for healthy church transitions. I developed a church transition plan that takes into account the health of the exiting and incoming pastors, and membership in order to help others design transition plans that avoid physical and emotional trauma, as well as church decline. I believe that maintaining the well-being of the outgoing pastor, new pastor, and congregation should be the goal. 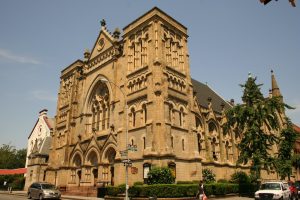 I currently serve as the Executive Pastor of Emmanuel Baptist Church in Brooklyn, NY. Emmanuel is an African American church located in the Clinton Hill section of Brooklyn with approximately 3,500 members with the average age of our members being 32 years old. The current Senior Pastor, Rev. Anthony L. Trufant, is the 13th pastor in the churches 140 years of ministry. 2021 marks Pastor Trufant’s 31st year of pastoral ministry at Emmanuel and in five years he is anticipating passing the pastoral baton! The church is already aware of his intention to retire, which means that a lot of thoughts and conversations about what will be has already started. Emmanuel is a Baptist church which means that based on denominational identity the church operates based on church autonomy. All Baptist churches have their own rules and do not function under any universal denomination guidelines. In The Challenge of Being Baptist religious historian Bill Leonard says “being Baptist is messy, controversial, and divisive. Like the gospel.”[1]  When it comes to pastoral transitions in the African American church they too have the potential to be messy, controversial, and divisive simply because they involve people, emotions, grief, and new beginnings. 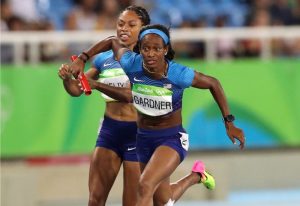 United States’ Allyson Felix, right, hands off to English Gardner in a women’s 4×100-meter relay rerun after dropping the baton in the race in the morning during the athletics competitions of the 2016 Summer Olympics at the Olympic stadium in Rio de Janeiro, Brazil, Thursday, Aug. 18, 2016. (AP Photo/Lee Jin-man)

Seven and a half hours after the initial disqualification the U.S. 4×100 women’s relay team headed back to the same track and the same lane where everything initially fell apart in an attempt to secure a spot in the finals to defend their title. This historic relay do-over at the 2016 Rio Summer Olympics qualified as the first time in Olympic history that a relay team was ever granted a re-run. The re-run took place in lane 2 and was marked by the fact that the U.S. team ran all alone with no competitors on the track and the whole world watching. From the outset of my project, I wrestled with knowing that the Black Baptist church needed a do-over when it came to talking about healthy pastoral transitions because I had already witnessed too many churches dropping the baton. I started my project and research off trying to answer the question of how to shape a healthy pastoral transition that was mindful of the physical, emotional, and fiscal health of the outgoing and incoming pastors, as well as the health and stability of the congregation. It was important to me as a preacher to root my scholarship in scripture, so I decided to use the Old Testament succession narrative of Moses and Joshua as an entry point to exploring succession. Additionally, I researched about succession in general and pastoral transitions in particular. It did not take long before I realized that there is not much research available regarding pastoral succession and even less on succession in the Black church. This realization led me to marketplace succession research, with a goal of gleaning what aspects of marketplace successions and recommendations could be effectively used in the “church world.” The final aspect of my research included three pastoral interviews with Senior Pastors used to glean information from them about their respective transitions. I spoke with my Senior Pastor Rev. Anthony L. Trufant, Rev. Dr. Gina M. Stewart the Senior Pastor of Christ Missionary Baptist Church in Memphis, TN, and Pastor Reginald W. Sharpe, Jr. the Senior Pastor of Fellowship Missionary Baptist Church in Chicago, IL. I asked each of them the same questions and though their responses took us in a myriad of directions ultimately, we discussed how not to drop the baton during the hand-off. During the re-run the U.S. Olympic women’s relay team clocked a time of 41.77 seconds to oust China’s team from the eight spot.

On Friday August 19th of 2016 the U.S. Olympic women’s relay team ran out of the less than desirable lane 1 for the 4×100 relay finals. After being bumped, jostled, dropping the baton, being disqualified, winning the disqualification protest, and re-running their qualifying round they went on to win the gold medal. They won in the finals not simply because of their speed, but because of their dedication, fortitude, precision and the flawless nature of their transitions. They took care of the stick! They were committed to good transitions! New Testament scholar Patrick Miller reminds us that “By story, example, instruction, prayer, law, and prophetic oracle, the Bible frequently sets before us a focus on responsibilities, characteristics, and demands incumbent upon those who are called or chosen to lead the people of God.”[2]Moses and Joshua were committed to a healthy transition that would allow the Children of Israel to cross into the Promise Land.

A healthy pastoral transition is one that enables a church to move forward into the next phase of its external and internal development with a new leader appropriate to those developmental tasks, and with a minimum of spiritual, programmatic, material, and people losses during the transition. The focus should be on preserving spiritual, programmatic, material, and people resources as much as possible during the transition.[3]

Based on my research I found that far too often the well-being of the pastors responsible for preserving the proverbial baton handoff were not a priority or focus during the process. I believe that a key part in a congregation embracing a new pastor and committing to supporting that pastor is connected to then knowing that the previous pastor whom they have loved and been ministered to for years is doing well past transition. There should be substantial efforts made to help a retiring pastor answer the question of “what’s next?” They should be encouraged to find their next passion, to figure out how they will spend their time, and around what they intend to establish their identity post the pastorate. “Too often pastors stay at a church not because they’re thriving there but because their identity is tied too much to their present role and they don’t have anything else to put their passion into. “[4]

My project innovation focuses on pastoral transitions based on retirement and calls for the succession plan to start 24 months prior to departure. During that 24-month period a successor should be identified either by pastoral identification or via a pastoral search committee. Additionally, at the 24-month mark the outgoing Senior Pastor should be paired with a therapist, a life coach, and a financial advisor.  In the book the Emotionally Healthy Leader, Peter Scazzero writes: “when meeting someone for the first time we usually ask, ‘What do you do?’ We ask because, in our time and culture, identity is defined in large part by occupation or job title.”[5] In an effort to support the outgoing pastor to avoid and identity crisis a therapist and life coach would be put in place to support them. The financial advisor would be put in place to help them to navigate their finances post retirement. Once the successor is identified and the transition period where the incoming pastor is walking with the outgoing pastor begins, there should be intentional and scheduled self-care time placed on their calendar, so that she/he can be groomed to develop healthy self-care practices. My recommendations for the incoming pastor at the beginning of their tenure are a physical trainer a therapist a sabbath day, vacation days, doctors appointments and a financial advisor. The thought is that as the church takes care of the pastors at each stage of the pastoral transition there would be an intentionality about maintaining ministry programming and allowing the congregation to both grieve the loss of one pastor while also celebrating the start of the new pastor’s tenure! If our churches practiced a commitment to wellness than more of our beloved houses of worship could mirror the success of the 2016 Women’s Olympic relay team and experience smooth transitions. 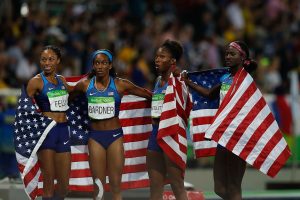 [3] Weese, Carolyn, and J. Russell. Crabtree. The Elephant in the Boardroom Speaking the Unspoken about Pastoral Transitions. Wiley, 2012, 41.

[5] Scazzero, Peter. The Emotionally Healthy Leader: How Transforming Your Inner Life Will Deeply Transform Your Church, Team, and the World. Zondervan, 2015, 154.