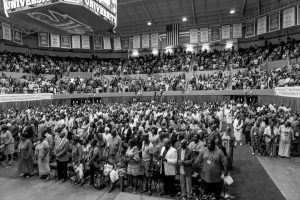 An Education for Life

Hampton Normal and Agricultural Institute was founded in 1868 by Hawaiian missionary and an agent of the Freedman’s Bureau Samuel Chapman Armstrong, three years after the Civil War ended, to educate newly freed slaves and Native Americans (1877). Today, Hampton University, affectionately known as Our Home by the Sea, offers a broad range of technical, liberal arts, and graduate degree programs. It is a historically black university community of leaders, learners, and educators representing 49 states and 35 territories and nations[1]. Situated along the banks of the Virginia Peninsula near the mouth of the Chesapeake Bay, Hampton University is a dynamic progressive institution of higher education surrounded by the city of Hampton, historical sites, and miles of waterfront and sandy beaches.

The Gifts of Time, Place, and Space

The Negro Ministers of Tidewater, Virginia met for the first time June 29 through July 3, 1914 in the campus chapel, the Memorial Church of Christ.  Forty ministers representing four mainline denominations: Baptist, Methodist, Episcopal, and Presbyterian were in attendance. The conference adopted a simple vison, mission, and objective which continues to be the foundation of the Hampton University Ministers’ Conference for more than a century.

Vision: To become a model of non-sectarian interdenominational cooperation in the African American church and in the world.

Mission: To build and promote God’s Kingdom on earth through interdenominational cooperation.

Objective: To promote the work of the Kingdom of God through intense study and scholarly discussion of those problems and tasks all ministers share together.

To this date, the Hampton University Ministers’ Conference-Choir Directors’ & Organists’ Guild Workshop remains the oldest of the conferences founded and sustained by colleges and universities established to focus attention on black churches as vehicles for the comprehensive development of black communities. 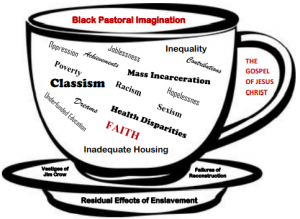 African American congregational leaders drink and pour from a cup filled with a myriad of existential experiences inherent in the subsistence of Black life.  The cup itself represents the black pastoral imagination with its handle representing the Gospel of Jesus Christ; Christological truths and principles are affixed to the cup of imagination. For the sake of illustration, the saucer represents historical periods woven into the fabric of American democracy significant to the progression and regression of African American survival and persistence: the residual effects of chattel enslavement, the failures of Reconstruction, and the remaining resurging vestiges of Jim Crow. Black pastoral imagination endures and thrives amid unresolved societal ills, systemic expressions of inequality, extemporaneous outbursts of verbal denigration, and physical acts of violence.  Yet, African American pastors still ask the question resoundingly with clarion voice, critical consciousness, and holy boldness: what do you see.

Principle 1: accepts imagination as the primary activity and basic construct of leadership as a creative process.

Principle 3: identifies wisdom leaders who serve as agents of change and guiding at various stages of the pastoral career arc.

Principle 4: thrives in the safety and honest critique of conversation partners trusted to share the day-to-day joys and burdens of congregational leadership. 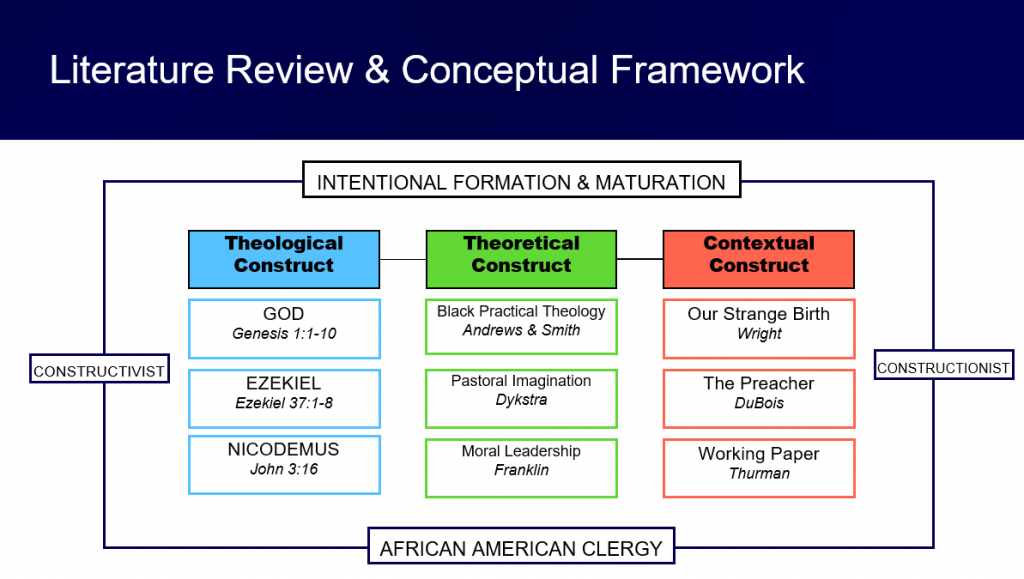 A systemic and clear path of ethnographic data analysis led to the six concrete principles above.

Ethnography as pastoral practice is about telling, listening, and sharing our stories. Teaching healing ministering cathartic narratives that reveal who we are, what we do, and why we do it. The beautiful thing about qualitative research is that the researcher has the opportunity to enter an ongoing conversation, dialogue with like-minded peers around a common theme, and make a fluid contribution to a solid body of work already in progress. Pastoral imagination in the leadership praxis of African American clergy is a phenomenon worthy of focused study. Theological ethnography has the possibility to connect academic theology with lived experiences of actual churches.[2] The lived experiences of African American pastors are rich in cultural wealth and ripe for theological harvesting. This sanctified ethnography is a theological method set aside for a specific purpose[3]. The unambiguous purpose of this ethnographic study was to explore Black pastoral imagination as the courageous creative work of called men and women who stand before God’s people and ask the question what do you see?

Howard Thurman describes life as a working paper made up of a creative synthesis of what and how the [individual] reacts to the living process.[4] W.E.B. DuBois believes the Black church exists and survives to encourage and empower a people with limited or arrested power[5]. Richard Wright explains that the call of the black church is to imagine the hope, faith, love, relief, release, and stability of a survivalist community[6]. Reimagining black pastoral imagination involves tapping into the cultural, academic, and spiritual wealth of a “heterogeneous, culturally-diverse, and politically dominated minority that struggles to survive”.[7]  Research findings, vision, and need come together to birth a year-round spiritual retreat center focusing on pastoral well-being, imagination, and agency in Black pastors, A national facility dedicated to black clergy development with an emphasis on creativity and the imagination is an innovation needed now more than ever. The center will be a spiritual and academic hub to further research and study in black practical theology.

Assuredly, pastors are formed over time, need space, and deep engaging experiences to grow and develop[8]. The national center will be established on the campus of Hampton University to extend its outreach to thousands of pastors who journey to the Hampton University Ministers’ Conference each year. Our aim is to help ensure that good pastors become great pastors. The call, formation, continuing theological education, and ever-evolving nature of the twenty-first century pastorate is in need of resources, tools, opportunities, dedicated time, space, and place devoted to the scholarship, praxis, and habitus of African American pastors who seek to lead healthy churches and vital congregations.

What Do You See?

[2] Timothy K. Snyder. Theological Ethnography: Embodied. The Other Journal: An Intersection of Theology and Culture, Seattle School of Theology & Psychology 2014.

[3] Pete Ward, ed., Perspectives on Ecclesiology and Ethnography. Chapter 4: Where is Your Church? Moving Toward a Hospitable and Sanctified Ethnography by John Swinton (Grand Rapids, MI: Eerdmans, 2012), 71-94.

[4] Howard Thurman. Jesus and the Disinherited. 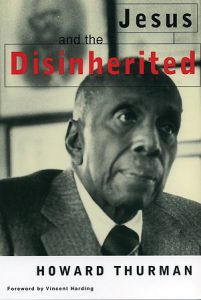 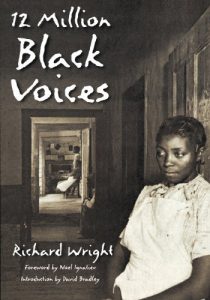 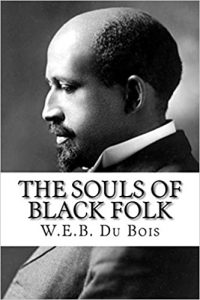 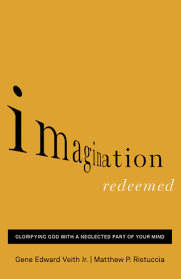 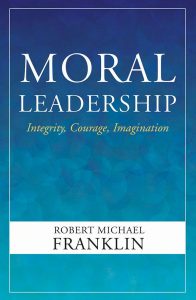 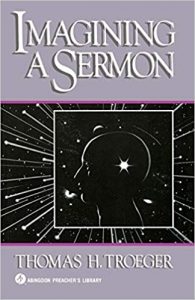