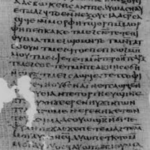 Papyri from the Gospel of Mary Magdalene, Coptic Codex, 4th or 5th century

Reading With New Eyes: The Bible As An Encounter For Progressive Christians 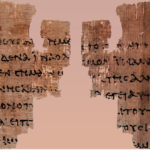 Faith deconstruction is a big topic for those who have become disillusioned with the church, or have left it all together. People seek healing in deconstructing communities, which are often virtual, as they unpack the baggage they have inherited from their faith formation. These communities can offer support and ease the isolation that accompanies leaving one’s faith home. However, deconstruction often falls short and only takes apart a belief system without helping to reconstruct something that feels more true and healthy for those involved. How do we help those in the midst of deconstruction to reconstruct a faith that is grounded in community, meaning, and facilitates a sense of aliveness in their life? One way is to introduce them to progressive Christian theologies and ways of interpreting the Bible. The scholarly term for this is progressive hermeneutics, but it’s generally about reading the Bible through a lens that values the dignity of all of God’s creation.

Another group that can benefit from learning tools to engage the Bible through a progressive faith lens are progressive Christians. My experience as a pastor in the United Church of Christ (UCC) for the past nine years has taught me that often people would like to have more of a relationship with the Bible, but they don’t know where to begin. They either find it intimidating, inaccessible, or question its relevancy for their lives. Often they do not engage with the Bible outside of the Sunday sermon, but would like to utilize it more, if only they knew how to do so.

One way to address the needs of both of these groups, those in the midst of faith deconstruction as well as Bible-curious progressive Christians, is to have a tool that helps them better access the Bible. I have attempted to create the beginnings of such a tool. 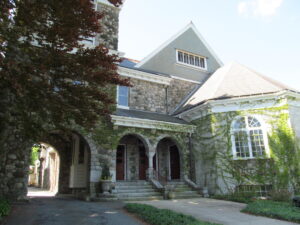 I created and piloted this progressive Bible curriculum with my congregation, Hancock United Church of Christ, in Lexington, Massachusetts. Hancock Church is a theologically diverse congregation with a membership of approximately 600. The congregation is predominately white and middle to upper class, and is very highly educated. While there are some members who grew up in the UCC, many come from other faith backgrounds including: Catholicism, evangelicalism, mainline Protestantism, or other religious traditions. Hancock church is an Open and Affirming (fully LGBTQAI affirming) and Immigrant Welcoming congregation, both designations that were decided by a congregational vote. While there are varying political views within the congregation, theologically most members are quite progressive.

The curriculum is structured in a workbook format, and provides a general overview of the Bible and a discussion about various ways of approaching Scripture. The scope of this project did not allow for a detailed exploration of specific books of the Bible, but that would be a good follow up project. The chapters in the curriculum include: 1) Origins of the Old Testament and New Testament: This Mysterious Book; 2) Theologies of Scripture: The Bible and the Matter of “Authority;” and 3) Methods of Interpretation: Owning Our Lens. In the future I hope to continue the curriculum to include a chapter titled, Finding Our Way Home: Reconstruction, Meaning Making and Living Fully.

I taught two sessions of the curriculum, chapters one and two, over Zoom with 25 members in attendance at each session. I needed at least an hour and a half per session, and would recommend teaching only half of a session per class, to allow for more questions and discussion. The students were very engaged and had numerous questions. At least half of each class stated that they had not felt they had permission (either as children or even as adults) to ask the questions that we were exploring in the curriculum. Questions such as what are the origins of the Bible, and how much authority do they give to the Bible in their lives? Some of the students expressed an old fear that in asking such questions they were on a “slippery slope” to not believing in God anymore. However, as the classes went on, several of them told me that the opposite had occurred, and that they could engage with the Bible and their spiritual life more because they felt is was more accessible than prior to the classes. 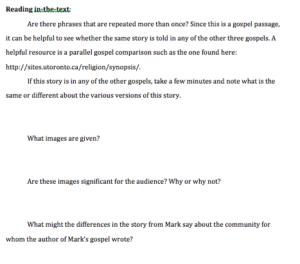 Sample exercise from the workbook

One weakness of my study is that I only taught people within my current congregation. In the future I would like to reach out to those who are not affiliated with a church, and who would identify as being in a process of deconstructing. This would allow me to evaluate the effectiveness of the curriculum for this demographic.

Overall, for those who were part of the pilot program, this curriculum has helped to demystify the Bible and make it more accessible.

Some tools that I recommend if you are considering using this curriculum are:

*A Guide to Bible Basics by Tyler D. Mayfield

*Sex and the Single Savior by Dale B. Martin