“I have never heard a preacher say that word before.”  It was a Sunday morning years ago as parishioners were streaming out the church where I was serving as the interim rector.  A dark-haired woman who always sat in the front row stopped me.  Her stillness was noticeable among this gregarious congregation.

She finally filled in the awkward silence: “I’ve never heard anyone say ‘rape’ in church.”

Certain words—words that name painful realities, like “rape”—are infrequently said in public, and they are spoken only rarely and tentatively in the pulpit.  Our encounter led me to ask questions about the language preachers use in our sermons, particularly about our willingness to name painful and shameful experiences in a direct way.

I became interested in what is often called trauma-aware preaching.  Such preaching takes seriously the events that may have affected members of a congregation, perhaps in the distant past or perhaps invisibly.  Such preaching also knows that these events may have left wounds in their wake, wounds that are healed in varying degrees.  Trauma-aware preaching recognizes that any congregation has in it a heterogenous group of survivors.

Knowing that I am likely preaching to trauma survivors every week—whether I know who they are or not—I wanted to explore ways to serve them better in my sermons.  I became interested particularly in how to speak. What gifts can different sermon forms offer trauma to survivors and their journey towards resiliency?

In January 2021, I became the rector of Grace Episcopal Church in Alexandria, Virginia.  It was a place well-suited to exploring these questions.  I could see traumatic responses in many members of the congregation.  Many of them spoke openly about their anxiety and grief—of their fear for their physical safety in coming to church, of the deep loss and insecurity they felt in the absence of familiar authority figures.  Others did not name the cause of their fears so directly but would respond fearfully and disproportionately to seemingly simple matters.  The practical realities of the pandemic—limitations on in-person meeting, for example—inhibited open discussion about these anxieties. 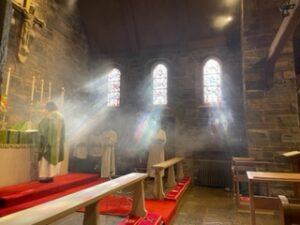 But alongside these traumatic responses, I could see deep resources for resiliency.  The church’s Anglo-Catholic liturgy provides a profound sense of collective social identity (and thus shared support), as well as offering opportunities for embodied, synchronous sharing.  The community—its sacraments, and its liturgy (including preaching)—could be salvific.

In the fall of 2021, I decided to employ different forms of preaching at Grace Church to see what effects they might have and how those effects might be intentionally employed to allow sermons function as a resource for resiliency to trauma survivors.  Knowing survivors’ needs—safety, connection, and especially the intermediate step of re-constructing one’s narrative of trauma—I was curious what different forms of preaching might offer towards those needs.  I chose three approaches:

After preaching, I reflected on these sermons with a small group of parishioners—individuals who had either identified themselves as trauma survivors or who had made clear that they were open to discussing the subject.

Our conversation did not point towards a one-size-fits-all form to address trauma; rather, it highlighted some of the gifts that each form might bring: 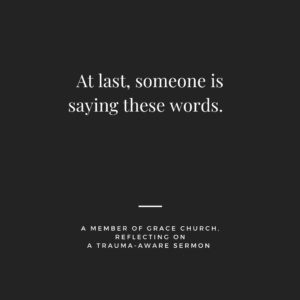 There is more work to be done by preachers to explore these possibilities.  I am especially interested in the promising connection between liturgy, sacrament, silence, and language.

The preachers’ work is of course accomplished alongside the work of survivors, who are engaged in deep soul labor, in cooperation with the Holy Spirit.  As preachers, we are blessed to work alongside people of such unintentional bravery and such deep faith.  And we are blessed to have a God who uses us as an instrument for fullness of life, for resiliency and flourishing.