Central America is a relatively young geologic region and many of the rocks featured in this portion of the tour were formed within the past 150 million years through processes of plate tectonics. The Nazca, North America, South American, Cocos, Caribbean, and Panama plates interacted over millions of years to form this geologically diverse region. The convergence of oceanic plates such as the Cocos and Nazca with the diminutive Panama plate formed a subduction zone where the denser oceanic crust was pushed beneath the Panama plate in a high-pressure environment where it liquified to form magma, some of which returned to the surface to form mountainous volcanoes. A similar geologic process occurred in South America where the Nazca and Antarctic plates subducted beneath the South America plate to form the Andes mountains. Because of this active tectonic activity, most of the rocks in this region are igneous or metamorphic.

This jadeite pendant is carved into a celt form with the features of an anthropomorphic bird. Though the beveled cutting edges of celts can be used as weapons or tools, green stone objects were prized across indigenous central american cultures for their beauty, luster, and religio-symbolic meanings related to agricultural wealth and maize The name “jade” is applied to a variety of green stones that can vary significantly in their chemical makeup. The two principal varieties are nephrite and jadeite. Nephrite is composed of tremolite or actinolite minerals in the amphibole family which are rich in calcium, magnesium, and iron and can be chemically described as Ca2(Mg,Fe)5Si8O22(OH)2. It often has a creamy opaqueness and has been used widely in Chinese, Māori, and Balken cultures. Jadeite, NaAlSi2O6, is a pyroxene mineral which has similarly been prized for its beauty and hardness but is much more rare than Nephrite. It is found most commonly in Mesoamerican art and to a lesser extent in neolithic European and Japanese cultures.

Stool in the Shape of a Human-Crocodile

This Human-Crocodile stool is composed of andesite, a volcanic rock associated with subduction zones, such as the Andes in South America. Andesite is found widely across Mesoamerica and indigenous peoples took full advantage of this tough stone, producing produce heavy-duty axes, wedges, celts, and various ground stone tools as well as objects of ornamentation and function. This architectural model is carved from diorite which is formed from the same type of magma as andesite. Unlike andesite, diorite is an intrusive igneous rock which cools slowly beneath the surface of the ground and as a result it is composed of larger crystals and is more coarse-grained than andesite

Lithic cores such as this are the byproduct of stone tool production. The prismatic production method used on cores like this one resulted in razor-sharp obsidian blades and was common across Central America. Other cultures such as the Cycladic Greeks also used obsidian in this way. 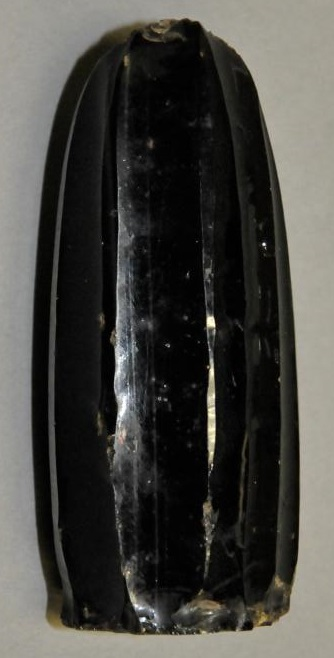