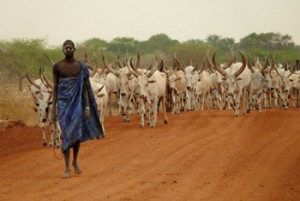 In Godfrey Lienhardt’s incisive study of the African Dinka, Divinity and Experience, he defines Dinka religion not as a set of external beliefs and rituals but as “a relationship between men and ultra-human Powers encountered by men… It is rather phenomenological than theological, an interpretation of signs of ultrahuman activity rather than a doctrine of the intrinsic nature of the Powers behind those signs” (1961 32). The Dirka religion is essentially about interpreting and controlling various social and natural experiences. An example of this is the ritual of burying masters of the fishing spear alive, which allows the community to control the experience of their leader’s death. The ritual burial of the master of the fishing spear allows the community to control the experience and nature of their leader’s death. The ritual death of the master of the fishing spear embodies for the Dinka the ongoing survival of Dinka myths and life in a way that regular death could not (319). In what sorts of ways do we attempt to control and shape our own life-experiences? What rituals and practices have we developed in dealing with death?

Lienhardt deliberately tries to avoid equating Dirka religious concepts and terms with Western ones—for example, he uses “Divinity” [jok] rather than God—and this careful use of language highlights Lienhard’s intentionality in presenting the world of the Dinka as the Dinka understand it. [Lienhard’s predecessor, Edward Evans-Pritchard, was perhaps not so careful in describing neighboring African Nuer religion (1956)]. Yet, Lienhardt also distinguishes between how the Dinka understand their religious world and we might understand it. He suggests that the Dinka Powers might be understood as representations/images which correspond to various complex combinations of Dinka experiences that are rooted in their social and physical environment. Does this resonate with what Clifford Geertz defines as religion: i.e. a system of symbols which acts to establish moods and motivations in humans by framing a particular conception of existence (1973 90)? What would these symbols be? Cattle? The masters of the fishing spear?

To what extent is Lienhardt’s work influenced or informed by Durkheim?[1] (You’ll have to bear with me because I am not as familiar with Durkheim as I need to be). While Lienhardt seems to resist the idea that the Dinka have a systematic set of beliefs and practices, he does emphasize Durkheim’s other two key elements of religion: sacred objects and the existence of a moral community. Lienhardt seems to resonate with the idea that sacred objects are projections on some level of the forces of the Dinka social world (124). For example, the clan-divinities represent “ideal and permanent values of agnation” (135) and the sacrifice of the cattle reflects social differentiation of participating members (234). On the other hand, Lienhardt seems to reject Durkheim’s rigid demarcation of the sacred and the profane, arguing that the Dinka move fluidly from what we’d term as the supernatural from the natural (291).

At the same time, Lienhardt’s ethnographic approach does focus a great deal of attention on understanding, as Geertz puts it, “men’s notions…of the “really real” and how these notions influence them (124), which for Geertz should be the first focus of business in an anthropological study. What really struck me in reading Lienhardt, was the Dinka’s rather blasé attitude toward religious actions and efficacy. One the one hand, a clan might sacrifice to a Power to demand healing for someone, while also recognizing that the Powers are ultimately uncontrollable. Divinity can refuse (271). If the ill man dies, this doesn’t impact belief in the existence or power of the Powers. Nor is their perspective of the Divine impacted if this man goes to a doctor and recovers through human medical assistance rather than a miraculous recovery in his or her village. Likewise, rituals to induce rain are usually performed just before the Dinka think the rainy season will occur, as Lienhardt notes, “their human symbolic action moves with the rhythm of the natural world…” (280). How does this contrast/compare with Western ideas of the Divine and our interaction with it? Or even biblical supplication and their rationales for a lack of Divine assistance?

1).  Lienhardt highlights that although the Dinka have a simplistic way of life they have a complex social and linguistic relationship with cattle, which represent both the Dinka and their relationships (26-7). Are cattle then an ultimate symbol of Dinka culture… or of Dinka religion? Do we distinguish?

2). Lienhardt maintains a distance between himself and his subjects in a way that Maya Deren didn’t. What are the advantages and disadvantages? Does he always do this (264)?

4). What would the Dinka say about someone who takes  a hallucinogenic to have ‘supernatural’ experience?

5.) Does Lienhardt over-read meaning and significance into various Dinka rituals? After all, the impression he gives is quite the opposite of Deren: he is an outsider and largely an unwelcomed observer. He doesn’t seem to get into their headspace. Is his distinction between what the Dinka think and how we might understand how they think at all useful?

1] Durkheim defines religion as a “…unified system of beliefs and practices relative to sacred things, that is to say, things set apart and forbidden–beliefs and practices which unite in one single moral community called a Church, all those who adhere to them.” (Durkheim; 1995: 44)