Language is an extremely powerful tool in understanding the fabric of a society. As Leeman and Modan note, “Material realizations of language are strategic tools that are wielded in local politics, power struggles, and competing claims to space” (p.332). This is true in Ireland’s capital, Dublin, where the language provides critical insight into Ireland’s culture and history. Although Ireland has two official languages, English and Irish (also referred to as Gaelic), the languages are used in very different ways, helping illustrate Dublin’s unique linguistic landscape. The use of Irish on government signage highlights a pressure from the government to perpetuate a distinctly Irish ethos while revitalizing an aspect of culture prohibited in the British ruling days; English, on the other hand, is used more frequently on a majority of signage to accommodate more people as Dublin embraces its future as a global city. 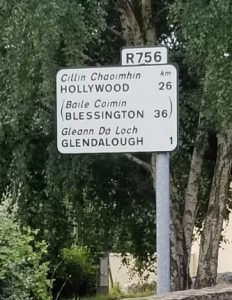 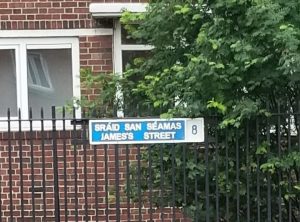 The use of Irish on signs (like the ones pictured above) has been interesting to observe, especially on an “informational” and “symbolic” level (Leeman and Modan p. 343). On an informational level, the use of Irish on signs provides evidence that the language is not dead within such a bustling and cosmopolitan city such as Dublin. In places like museums, full Irish text accompanies the English translation, not just average signs. This again shows that Irish is more than just a ceremonial language, but rather is a fully functional and conversational language. The use of Irish overwhelmingly on public and government signs provides a more layered analysis on a symbolic level. Of all the Irish I noticed in signs around the city, most are either used in government buildings or government funded areas. For example, Irish parliament, where I intern, is known by its Irish name, Dáil Éireann, and government subsidized things such as the bus and street signs utilize Irish. As Leeman and Modan note, “Having one’s own language enshrined on most private and government signs should contribute to the feeling that the in-group language has value and status relative to other languages” (p. 334). The use of Irish may be pushed by Irish government to perpetuate an aspect of Irish culture. In doing so, they may hope to bolster a sense of nationalism and Irish identity.  Furthermore, it may be a way of separating from the British after a history of British imposition. Given that Ireland gained full independence under 100 years ago, Ireland may be trying to separate socially from their former colonizers. This may be particularly true given the ongoing political tension in Northern Ireland. Using Irish may be a relic from the days of British rule and may contribute to a reluctance to completely integrate English into Irish society. Also, aspects of Irish culture, such as the Irish language, sport, and religion, were restricted during British rule. Using the language today may be a tribute to those that wanted to, but were forced not to, proudly use Irish. 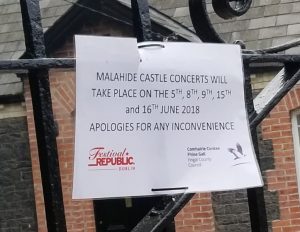 Despite the history that comes with Irish, English is much more pervasive in Dublin. In recent Irish history, Ireland has benefited from low corporate tax rates, seven years of sustained economic growth known as the Celtic Tiger, and events such as Brexit that have catapulted Dublin into the forefront of European cities. Consequently, Dublin’s symbolic economy has adapted their language to accommodate the increasingly diverse and global population in the city. Concert signs, like the one pictured, along with store signs, advertisements, and many other signs are written in English. Likewise, English is the predominant language spoken; however, other languages like Spanish, Russian, Portuguese, French, and German are heard throughout the city, another testament to globalization in the city. While Irish may hold more historical and cultural significance, in the modern days of bustling business, English has taken the foreground.

In sum, Ireland’s tumultuous history with Britain and a desire to bolster Irish pride may have influenced the use of Irish on government signs, however, globalization has increasingly pressured Dublin into adopting English as the lingua franca.