Walking to work one morning I approached a curb and saw a sign painted on the edge of the road facing me. “LOOK LEFT” it said in all caps with a large arrow pointing to the direction that the traffic would flow. I stopped and indeed did look left and walked to my bus stop. While on the Dublin bus thinking about linguistics landscapes, the bus screen popped up with a reminder to use the hand rails. It displayed the words in both English and Irish. I found this to be in contrast to the road sign that seemed to indicate a country designed for foreigners who do not know the flow of traffic.  The linguistic landscape of Ireland paints a picture of a country with foreign influences infiltrating the fabric of the culture and an active desire to keep Irish traditions alive.

Irish traffic flows in the opposite direction as it does in the US and most places in the world. Because Ireland has become so diverse in the last ten years alone, the signs telling which way to look for traffic have become a part of every street side. While these warning signs do not support a multilingual community, they do support and even protect a multicultural one. 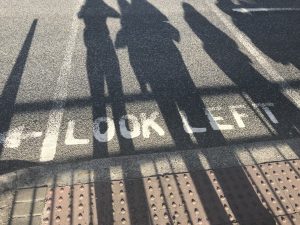 The city has made alterations to accommodate different social norms like putting reminders on the street to remind passerby’s which way to look for oncoming traffic but also have made active efforts to keep the Irish way of life alive. All the signs in Dublin transport system display the English and Irish translation of the words. Everyone in Dublin speaks English so just having English on street signs would be more than sufficient for the population to navigate the city. The Irish translation, instead acts as a reminder of something purely culturally Irish. The reading “Commodified Language in Chinatown: A Contextualized Approach to Linguistic landscape” describes this as a cultural capital that is created for Irish natives to differentiate themselves as natives to the country (Leeman, Modan). 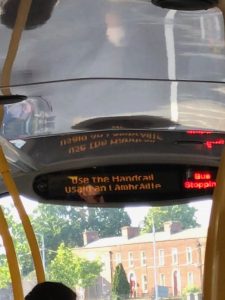 One might also argue the active push to keep Irish language alive is due to the symbolic economy it has provided Dublin. Because Dublin is a fast growing urban center, much of the Irish charm of the city has been phased out and replaced with structures one would find in a number of global cities. By retaining the Irish language throughout the city, it creates a themed environment, similar to the environment of Chinatown found in the reading. This themed environment allows Ireland to keep its cultural relevance that generates money from tourist looking for an authentic Irish experience (Leeman, Modan).

Dublin is a fast growing city and is facing a conflict between accommodating a city for an outsiders use, and keeping the Irish history alive throughout the city. Road signs are completely utilitarian and point to a direction the city is going that lacks much of stereotypical Irish culture. The bus signs tell an opposite story. One that is completely un-utilitarian and there for the sole purpose of keeping the Irish language relevant. As Dublin continues to grow they will be faced with more of these budding ideas and it is up to the city to weigh the benefits and costs of keeping Irish traditions alive.