Before the invention of techniques of mass-production of books, every book, document and manuscript had to be hand-made. Experts followed many steps meticulously to create a book and its materials. Paper was not very common in Europe during the medieval period, so people used different types of animal skin for textual production. These troublesome and exhausting steps made every book and print a unique piece that had unique stories. Stories beyond the story of the textual content. By looking at the materials of a medieval book, one can get many information about its time, its society and culture, and its target audience; which are useful information to interpret the text besides its literal context. ‘Medical Herbal and Miscellany’((London, British Library, Sloane MS 1975) is a medical book written in 12th century, and by analyzing its materials such as: binding, parchment, color and language, we can learn more about the book and interpret it in a better way.

Medical Herbal and Miscellany is a book that offers numerous medical information and advice. It has illustration that support the medical advice it gives, and it also informs the reader about the use of various herbs. The book dates to the fourth quarter of 12th century, and is thought to be written in England or Northern France (British Library Medieval Blog).  According to the digitized manuscripts of British Library, one of the owner of the book was Sir Hans Sloane (b. 1660, d. 1753) who is a physician and collector. It was purchased by the British Museum in 1753 as part of the Sloane collection. The earlier owners than Sir Hans Sloane and the dates of the ownership are not known certainly.

The first thing that grabs the attention of the reader when one looks at this book is the colorful illustrations on some pages. The colors blue, red, green, brown, yellow and of course black were used for both illustrations and for some letters and words. Colorful inks were not very easily accessible in this time period, as they were hard to produce which made them expensive. The use of colorful inks tells us that the institution or the group of people who created the book was wealthier than the general public. Until the end of the 12th century, books were mostly produced by “monastic and other ecclesiastical institutions” (Treharne, 25). Although monasteries mostly wrote gospels, theological, and in general religious texts, it is possible this was written by a group of scholars who were based in a monastery. Scholars who had medical information and interest in the use of herbs and different medicine. It is more likely that intuitions such as monasteries had funds to afford to manufacture books that are colorful like this one. 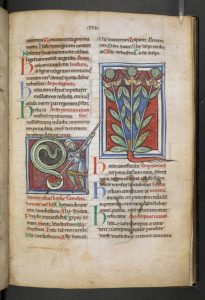 A page from the book with illustrations. http://blogs.bl.uk/digitisedmanuscripts/2016/09/snakes-mandrakes-and-centaurs.html

The language of the book is Latin. Another common feature of the books in this time period. In England and other parts of Europe texts were written in Latin, and sometimes in Latin and English, or Latin and French. This shows that the target audience for this book was not regular people, as most people didn’t know how to read and write since the majority of the population was poor and uneducated. The language also gives us hints about the communities who read the book. Textual communities in Medieval Age were mostly lead by the religious people (Treharne, 26). People who were affiliated with these communities were more likely to read a book like Medical Herbal and Miscellany that is written in Latin.

The book is written on animal skin, it could be both parchment or vellum depending on the type of animal that was used. Although papyrus was commonly used in Mediterranean (Treharne, 23) animal skins, parchment or vellum, was preferred in Europe during the Middle Ages for certain reasons. It was more durable in humid and it was better for the long term use (Barbara, 8). Parchment was expensive and hard to get, which again shows that the book was written by an institution who had accesses to book manufacturing skills and funds, such as a monastery. The information we have about the binding of the book is that it was bound post 1600 (British Library Medieval Blog), and it is marbled end papers. Marbled papers was used for important books and documents (Bahrens, marbled Paper), so people wo did the binding in 1600s must have perceived this book as an important source of information, which tells us that the medical information book provides was valuable for hundreds of years since the time it was written in 12th century.

Medical Herbal and Miscellany is an interesting book that offers medieval medicine practices, like the depiction of Mandrake plant that was used to make anesthetic, or how to deal with a “rabbit dog” when faced (British Library Medieval Blog). The book’s textual context gives us an idea about the medicine practices of the 12th century, but when the materials of the book is considered and analyzed we can reach to broader conclusions and intellectual assumptions about the people who manufactured the book, the people who read it, and the cultural setting of the society in which it was written.