My name is Madison Rousseau and I am an undergraduate student at Emory University. I am conducting this anthropological study because food is an integral part of people’s lives and the act of eating food takes place primarily at a table, though this may differ in various cultures. The simplest objects can render significance for people. I seek to insert myself as the proverbial fly on the wall of a family’s dining room so as to observe what can be associated with a kitchen table. I hope to find what cultural associations underlie this table within a particular family. A kitchen table can be a microcosm of a family’s life, not speaking at all and yet telling the routines and interactions of a family’s daily life. It is a cultural artifact much like food itself. I will observe the culture created by daily habits surrounding this artifact in order to find what activities take place around this table and what parts of a family’s culture can be gathered through dissecting the characteristics of the table. The particular table I chose to focus on has begun to creak with age, which makes it an interesting focal point for the purposes of this study. With time comes memories and activities that happen at the table. For instance, a table someone has owned for a few months may have no more significance to the person other than its price tag, but a table that has been owned for years may bring about more memories for the owner and thus possesses a greater significance. To put it simply, it is the age and the memories that make this kitchen table of particular interest to me. The table belongs to an elderly couple who live in Georgia and have been close friends to my family since I was young. Their children have long left this house to raise families of their own, so the purpose of this table has evolved from the central focus of serving meals to a young family while serving up advice, listening to the day’s activities, and acting as a place for doing homework and school projects to a spot for drinking the morning coffee, reading the paper, sorting bills, putting together jigsaw puzzles, writing short stories, as well as having meals. I could not help but smile when Mr. Warren reached out to shake my hand at the door, thinking humorously of us engaging in what Lin Yutang would call a curious western custom (Yutang 257). Mrs. Warren skipped the handshake and went right for the hug, characteristic of Southerners. 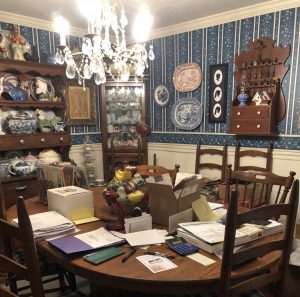 In image above: kitchen table covered in bills and notebooks

The anthropological methods I have employed to study this kitchen table consist of participant observation and interviewing as a complement. This method of participant observation was chosen because engaging in activities surrounding the table allows me to record both the emic and the etic, which is the inside and outside perspective as I learned in my Introduction to Sociology class. The questions I asked in the interview are open-ended so as to encourage the couple to give a greater influx of information or data. If only asked what happens at the table during a meal, I fear that only a partial picture of the cultural significance that this table holds would be revealed. However, by expanding the scope of the questions to what happens before, during, and after meals at the table, a better overall picture of the culture surrounding the table and a greater understanding as to why certain characteristics exist with the table emerges. Expanding the search from just one time of the day to the majority of the day extended the breadth of time in which elements of one’s culture arise more frequently.

The table not only displayed the food, but also highlighted elements of Mr. and Mrs. Warren’s culture including Southern hospitality, reflection, and Christianity. I partook in a newspaper crossword puzzle at the table early in the morning with Mrs. Warren, witnessed the fine art of paying bills by Mr. Warren, and helped put a jigsaw puzzle to rest. I enjoyed some pork chops, warm biscuits with white gravy, and fresh cut cucumbers and tomatoes from the garden at the table during lunch and then witnessed a book of short stories unfolding before me as the elderly man spoke of some of his memories he had written down. Every now and then while we were conversing, he would have a new memory come to mind and quickly scribble it on another page of his notebook before he would forget. As dinner time came, Mrs. Warren asked me if I could please help set the table, and I searched through her drawer of utensils to find the right-sized forks and serving pieces. Mrs. Warren had prepared a delicious roast stuffed with garlic, gravy made thick from the fat of the roast and flour, many warm bread rolls buttered in which to sop up the gravy, creamy mashed potatoes, and black-eyed peas. We ate family-style, engaging in the practice of shared dining as Liu Junru described being distinctively characteristic of modern-day Chinese in the section of “Food and Drink” in Chinese Food (Junru 35). Upon reflection, it seems that many elderly people like to engage in this practice of shared dining. Before engaging in this practice though, we participated in another practice—praying. My observations reaffirmed the view I had going into the couple’s house—just as Lin Yutang recognized that a broader view of food should be utilized, I recognized that there should be a broader view of a kitchen table, one that captures the cultural significance of a table (Yutang 248). It encourages socialization. As previously discussed in class, the seats of the table can represent the hierarchy of the family members sitting in them. Despite the table having plenty of chairs around it, the woman sat at one head of the oval table and the man sat at the other end, typical of where parents would sit at a table in some families. I was sitting at the center of the table, possibly representing how the two thought of me as a granddaughter or showing that I was their guest of honor.

Concluding this study has given me the ability to reflect on how central a piece of furniture can be in one’s everyday life. I came to the conclusion that a kitchen table is more than just a basic piece of furniture serving a single purpose—acting as a serving place for food. It is also where games are played, stories are told, and sharing happens. The kitchen table is similar to the Italian food market, Porta Polazzo, in that it also acts as “a place to gather and spend time with compatriots” (Black 101). Tables function as bonding agents among people. According to Mrs. Warren and Mr. Warren, the kitchen table is where meals are eaten, conversations are had, and grace or prayer is made. Through observation, I saw that it served even more functions than these, functions of which I elaborate on when noting my observations in the prior paragraph.