Congratulations to Rema Elmostafa, Robert Howell, Alicia Johnson, and Garrett Shuler, all of whom earned honors for the Honors Seminar. Their projects are in the drop-down menus above. Enjoy reading their exciting projects! 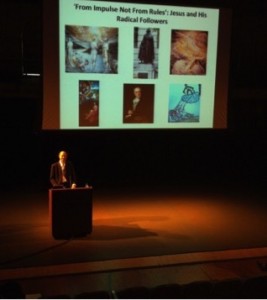 Dr. Christopher Rowland, the recently retired Dean Ireland’s Professor for the Exegesis of Holy Scripture, was the 2015 Pierce Visiting Scholar (a faculty exchange program between Oxford College and Oxford University that is run by the Pierce Institute for Leadership and Community Engagement.

Dr. Rowland gave two public lectures. The first one, picture above and below, was the  Pierce Visiting Scholar lecture at Oxford College on March 24, 2015. The lecture, “From Impulse Not From Rules: Jesus and His Radical Followers,” was well-received by the students and faculty members who attended.

The class also was able to have dinner with Dr. Rowland and his wife Catherine right before Dr. Rowland gave his lecture at Oxford.

The students also received an autographed copy of one of Dr. Rowland’s books (they chose which one they wanted). 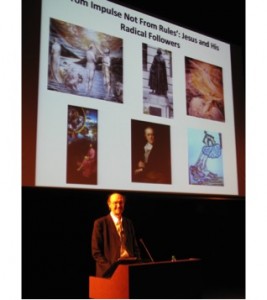 We welcome Ben Brown to class today to help us put together a better class site to display our work. We thank Ben for his continuing efforts in making our class, research, and presentations better.

The Honors Committee is meeting soon, and I need to give them an update on your projects. Make sure you keep them up to date. Our class discussions hopefully have brought more clarity and focus. It is time to wrap up the first trajectory of your project and begin the second trajectory (some of you are closer than others, since some initial trajectories are larger than others. You will need additional (if not final, for at least one of you) trajectories for us to discuss next week.

Tentative Title: Introduction to the Genealogical Account of the Folk-Ballad “Dives and Lazarus”

Perhaps no objet d’art warrants an analytical “reception history” more so than the traditional folk-song or ballad; as scholar Cecil J. Sharp notes, “[whereas] art music is the work of the individual…Folk music, on the other hand, is the product of a race, and reflects feelings and tastes that are communal rather than personal; it is always in solution; its creation is never completed” (Sharp, 19-20). With this is mind, we can perhaps note the inherent similitude in the respective medium of folk music when contrasted with Jesus’s parables in the New Testament; both a folk song and a parable are relatively succinct and didactic manifestations of a value systems—the latter religious and the former societal—and one could contend that every folk-balladeer par excellence is able to briefly mimic Christ as the sonorous prophet who transcends their art-form and simultaneously becoming the moralistic raconteur. Considering the nexus in which the two mediums attempt to teach through the employ of narrative, it appears that any folk-song that is ultimately a transfigured parable of Christ would be created to reinforce a certain thematic element of the original parable itself contextualized in the new social milieu and historical environment which the subsequent iteration is crafted. However, since folk-music is specifically not the product of a fickle artist’s choice of artistic topic and rather is an explicated lesson originating in communal values, the reappearance of the parable would seem to suggest that the chronologically subsequent society needed to be either reminded of the moral themes of Christ’s parable or perhaps needed to amend the morals as they appeared in the anterior Biblical source-material. Purportedly, the folk-song should be an honest reflection of the majoritarian stance that a given society espouses at the given time of the work’s creation; therefore, the manipulation of the parable’s minutiae in the ecclesiastic text or tradition insofar that there is significant inclusion or exclusion of certain thematic elements would suggest the society’s disposition towards the themes or moral claims included within the original Biblical literature. Hence, the folk-song based on a parable is a society’s response to the ecclesiastic call of the original iteration of the parable in the Bible.

Sharp contends that folk-music bifurcates into two general domains the folk “song” and the folk ballad, of which a given work of folk-music is organized primarily in accordance with one specific quality that folk-music scholars find most salient—whether the song is framed as a subjective expression of the experience of Nietzsche’s Dionysian artist or rather the objective delineation of a tale befitting most antiquarian bards or medieval minstrels. Most historians argue that the demarcation lying in the artistic perspective of either the subjective folk song or objective folk ballad is such a critical factor in determining the appropriate method in which one analyzes the work because the latter presupposes the individual auteur’s relative autonomy in the creation of the work whereas the former’s creation presupposes the subtle manipulation of the community as an artistic agent (Sharp 109-110) . The preeminent 19th century scholar of the English and Scottish folk ballad tradition, Dr. Francis James Child of Harvard University, determined that the ballad, “unlike other songs, does not purport to give utterance to the mood or feeling of the singer [or author]…[The singer] merely tells what happened and what people said…if it were possible to conceive of a tale telling itself, without the instrumentality of a conscious speaker, the ballad would be such a tale” (Child, xi).

The folk ballad “Dives and Lazarus” begins in medias res with little introduction or character development of the eponymous characters “Dives” or “Lazarus” on the part of third person omniscient narrator prior to the event being described within the confines of the song itself. (insert the etymology of the names?) However it is of critical importance to note, the “rich man” is never named within the parable itself found in the Gospel of Luke 16:19-16:31 either. Instead, Jesus begins the parable “there was a rich man who was dressed in purple and fine linen and who feasted sumptuously every day”. As such, the adjective “rich” is translated into diversus in Latin and when the adjective is used in the nominative case the proper noun “Dives” literally translates verbatim into “a rich man”. Dives is not the explicit name of the anonymous rich man of course; yet it became a tradition to refer to him in accordance with this Latin nomenclature in the English version of the folk song. In a similar manner, the Latin designation “Lazarus” is derived from the Hebrew word Eleazar, which essentially means, “God has helped”. Thus Lazarus literally means in the Latin nominative case, “a man whom God has helped” and for this reason the name is also appropriate for the other Biblical figure named Lazarus, Lazarus of Bethany, whom Christ brings back from the dead.

As the first verse appears to elucidate, the day of the rich man and Lazarus’s conflict is predominantly a banal one not distinguished by any specific qualities that would catalyze the tension. Rather the event “fell out upon a[n unnamed] day” homogenous with all the days prior and following it to illustrate the consistently extravagant lifestyle of the rich man who can feast in luxury any day of his choosing. The rich man is moreover so extravagantly blessed that not only can he himself enjoy opulent meals, he can invite all of his wealthy associates that they too may partake in his feast even though they perhaps are not wanting of any access to sustenance themselves. Interestingly, Dives invites not only his wealthy friends, but specifically “gentry of the best” which in the 16th century British context typically denoted a particular social class of societal elites. As Coss notes, the exhaustive title for members of this class is the “landed gentry” which indicates that such “gentlemen” were members of the upper class that profited upon the land which they rented to middle and lower class members such as tenant farmers and husbandmen despite never toiling upon the land themselves which they reaped pecuniary profit. (Coss) Although these aristocrats were wealthy administrators of land and thus revered; they were not true nobility in the British context because they lacked an official title of “peerage” they despites sometimes rivaling their political superiors in terms of fiscal assets. Members of this societal sub-class were often detested by the other classes of members for their characteristically lavish lifestyles not earned through hard labor itself.

Lazarus is described as lying at the door to Dives banquet hall and implores the rich man to be charitable with his nourishment that he might bequeath “some meat, some drink, brother dives” to the less fortunate. Although it is not explicitly stated in the second verse, Lazarus’s request of the rich man with regards to his feast that extra victuals be “bestow[ed] upon the poor” indicates his own impoverished status which is confirmed by his later description as “poor Lazarus”. Dives smugly rejects Lazarus’s request by arguing that “thou art none of my brother, Lazarus, that lies begging at my door” and therefore such a “subhuman” entity as a beggar is undeserving of any meat or drink whether it be Lazarus or any other person of a similar status. The humbled beggar now desperate for survival notes that without any donation of food is starvation is guaranteed which Dives in verse 5 explicitly acknowledges. Lazarus’s admonition become a bit more panicked as he transitions from begging for food on behalf of morality’s sake, his own life’s sake and finally Christ and by extension God’s will. As the pleas get more frantic and grand, an interesting pattern subtly emerges—Lazarus is gradually shooed from the physical abode housing the table of Dives in that he recedes from “door…[to] wall….[to] gate”. As Lazarus waits longingly outside the gate of Dive’s manor, the despicable elite explicitly acknowledges Dives inevitable starvation pending upon his lack of intervention. As a final expression of his willingness to be rid of Lazarus’s pestering, Dives sends both his merry men and dogs to dispose of the vagrant. Even though the respective cohorts of jovial guards and watchdogs intend to execute their patron’s orders, the pitiable nature of the derelict plagued by bodily lesions and malnutrition cause them to abstain from visiting violence upon him—assuming that God does not directly intervene in removing the goon’s “power to strike a stroke” and canine’s “power to bite at all” as the causal force behind their pacifist responses.

The tenth verse begins with a reiteration of the earlier line “as it fell upon a day” which appeared to indicate relative normalcy is also salient in that is shows the Lazarus death as that which is an unassuming whimper as opposed to a melodramatic exit. God sends down his angels for the innocent victim of worldly circumstances and then extends the gift of eternal salvation and angelic company as consolatory recompense for Lazarus’s mortal plight. Conversely, Dives is met by two serpentine escorts following his death who welcome him to a punishment in Hades characterized by eternal suffering as penalty for his Earthly crimes. In the last three verses, Dives is the one consigned to a position of impotence as the beggar and the new hierarchy directly foils the Earthly encounter where Lazarus begs for help. Addressing the formerly disenfranchised Lazarus directly as he notes his new position of comfort, Dives begs for water to satiate his eternally parched throat. However, the fitting punishment does not appear to catalyze Dives’s acknowledgement of his own former transgressions and his unethical treatment of “Brother Lazarus”. Rather, it appears his selfishness and egoism still consumes his heart and it is not the pain of others that forces him to acknowledge the wicked nature of his former actions, but his own eternal pain and suffering that acts as impetus for his reevaluation of his human life. Therefore, it appears that the old adage rings true; you can’t teach old Dives new tricks.

A Chorus of Voices