Homo faber: The Language of Technology 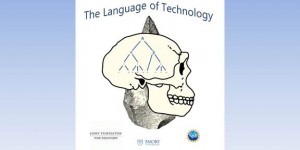 Language and technology are defining human characteristics, but how are they related to one another? Current perspectives on human evolution treat symbolic language as the critical benchmark of modern human cognition (“Homo symbolicus”), but this account remains incomplete. Major evolutionary transitions (e.g. stone tool-making, dietary and habitat expansion) occurred prior to the “symbolic revolution” and have continued (e.g. agricultural, industrial, and information revolutions) after. This project will place a renewed focus on human technology (“Homo faber”) in order to provide a more general framework for understanding this pattern of ever accelerating change, including the origins of language. We will test the hypothesis that language is a special case of a more general capacity for complex, hierarchically structured, goal oriented behavior (also seen in technology) by using a novel integration of archaeology and neuroscience methods to investigate possible functional, anatomical, and evolutionary connections between language and tool-making.

To more directly address evolutionary questions, the project focuses on the evolutionarily relevant, archaeologically visible behavior of stone tool-making. In the words of Louis Leakey, stone tools represent a form of “fossilised behaviour” that can be used to make inferences about the evolution of human dexterity, cognition, and cultural transmission processes. The Early Stone Age accounts for roughly 90 per cent (2.6–0.25 Ma) of human prehistory, encompassing a technological progression from simple stone chips to skillfully shaped tools as well as a nearly three-fold increase in brain size. It is likely that many distinctive aspects of modern human brain structure and function evolved during this period. In order to study this proto-typical human technology using the modern methods of neuroscience, the researchers will teach experimental subjects to make Paleolithic tools. Cognitive, behavioral and neurophysiological aspects of the learning process will be investigated using brain imaging, eye-tracking, psychometric testing, the annotation and analysis of video-recorded tool-making action sequences, and archaeological analyses of the actual tools produced. Drawing on formal language theory, we will develop new methods for describing the syntactic structure of these natural action sequences and measuring their hierarchical complexity. Manual parsing of action sequences by expert observers will be compared with the data-driven segmentation of action streams based on the eye-movement patterns of research subjects in order to produce a robust consensus. These methods of “action syntax” analysis will be generalizable to other complex behaviors, and will enable the direct comparison of hierarchical structure, information processing, and brain function across linguistic (story listening) and tool-making (action observation) behaviors in the proposed study. By investigating possible neural overlap between language and tool-making, the project will test major evolutionary hypotheses and promote integration between neuroscience and anthropology by developing new and broadly applicable methods for studying complex, naturalistic behavior. This research will pursue the hypothesis that hierarchical structure is a unifying principle in human cognition, crossing behavioral domains that are traditionally conceived as distinct.