Sustainability—what Aldo Leopold called a land ethic—is a complex paradigm shift emerging in many parts of the world, envisioning a different future for agrarian and industrial society.  Sustainable approaches work to reverse damage to biological life support systems, to ensure food security and healthy livelihoods, to increase social equity, and to expand participation in decision-making.  I particularly enjoy the ways that, sometimes quite invisibly, today’s sustainability movement builds on anthropological research.  Over several generations, anthropologists have documented viable lifeways in human history and around the world, offering tangible alternatives to present practices.

Emory University has now made sustainability a core commitment, and for 20 years, I worked with the Office of Sustainability Initiatives to bring that vision to reality.  As Faculty Liaison, my responsibilities were mainly curriculum innovation—including the Piedmont Project faculty development program—and the Sustainable Food Initiative.  My research connected to this work, as we learned what kinds of experiences changed individual behavior and what kinds of policies and practices support institutional transformation as well.

Grassroots Efforts, Change at Emory, and the Piedmont Project

My interests in sustainability began with a focus on grassroots efforts around the world that provided leadership in cultural transformation, tested new alternatives, and addressed global problems (such as deforestation, water contamination, or an increasingly concentrated food system).  Grassroots groups have pioneered solutions such as local food efforts, socially responsible consumption, and fair trade networks.  These local solutions, in turn, sometimes inspire and support national and international movements, such as the Via Campesina or the insertion of environmental and food security into human rights discourse. 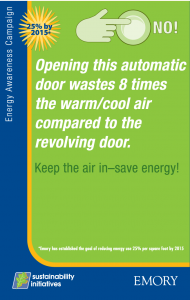 In 1999, my focus turned to Emory as a hands-on arena of cultural transformation.  Several “communities of practice” emerged, such as the Piedmont Project, the Faculty Green Lunch Group, and the Ad Hoc Committee on Environmental Stewardship.  The latter group successfully campaigned for the passage of a university-wide Environmental Mission Statement, which laid the groundwork for the creation of an environmental officer position and later, the emergence of sustainability in the 2005-15 strategic plan and the commitment by the president’s cabinet to sustainability as a fundamental principle of the university.  During this time, Emory developed new architectural commitments to “green buildings,” led by Campus Planning and Construction and the Senate Committee on the Environment. In 2013, Emory was named the Best Higher Education Institution nationally by the US Green Building Council.

The establishment in 2006 of the Office of Sustainability Initiatives and the naming of Ciannat Howett as Director took Emory’s work to a whole new level.  The Emory sustainability network map highlights the breadth of our efforts and connections, from green buildings to sites for contemplation.  Over the years, activities at Emory around sustainability have developed a theme of engagement with the surrounding landscape, including Atlanta’s cultural and social history as well as its natural history.  Beginning with guided regular woods walks and forest restoration projects, faculty and staff efforts led to the development of a self-guided walking tour and later an interactive campus map of sustainable sites (https://sustainability.emory.edu/). In recent years, these themes have been integrated into many activities, including orientation for new students and for faculty and staff.

As Emory has become a sustainability leader in the city and region—through our sustainable food initiative, award-winning recycling, waste reduction, and alternative transportation programs, forest preservation policy, and climate action plan—the university is a fascinating panorama of cultural change, resistances, and creativity. 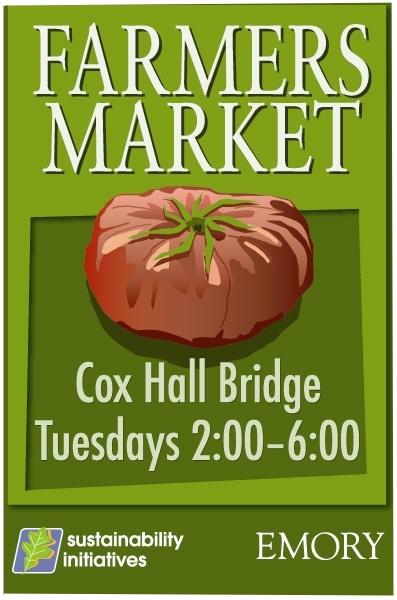 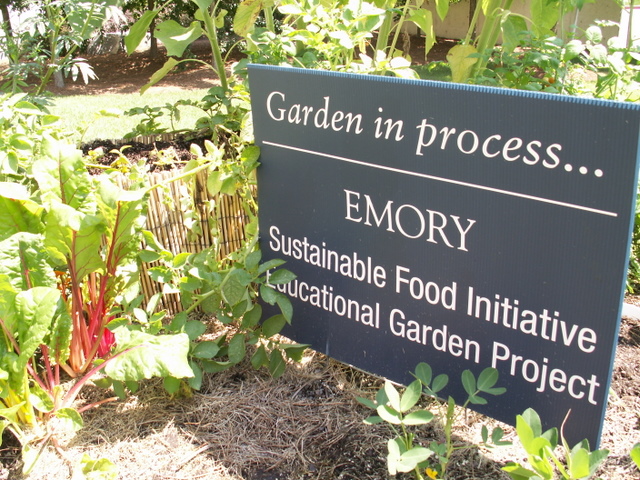 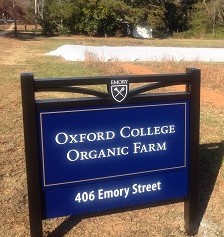 One focus of energetic work has been the Sustainable Food Committee at Emory and its many efforts to support new procurement practices and campus awareness.  First by developing purchasing guidelines and later through an informative brochure “Eating Sustainably: An Introduction to Sustainable Food,” the committee’s faculty, food service staff, and student members sought to develop sound policies based on research in agriculture and health.  By 2018, Emory Dining had achieved over 40% of purchases from either sustainable or local sources in campus dining halls. An annual sustainable food fair welcomed thousands, a weekly Farmers Market put hundreds of thousands of dollars into farmers’ pockets, and nine educational food gardens tended by students and staff expanded farming knowledge. Five Emory hospitals also began innovations toward more sustainable food sourcing.

Several publications on the role of campus sustainable food projects emerged from this work. Controversies and contributions to rebuilding a healthier global agro-food system are described here: (Barlett11CampusFoodAA), and the process of personal and institutional transformation and the variety of paths and languages that support the paradigm shifts necessary to rebuild a viable relationship with the earth and described here in “Reason and Reenchantment in Cultural Change.” Two main strategies for building local food systems are described in Campus Alternative Food Projects and Food Service Realities. 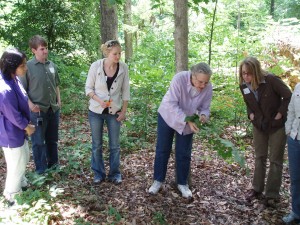 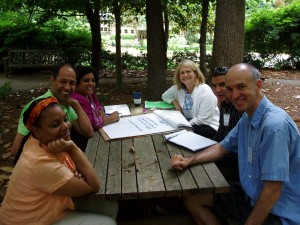 The Piedmont Project innovated by emphasizing relationship to place and encouraging reflection practices as a part of creative leadership.  The project has been fortunate to receive funding from the deans of all six professional schools and both graduate and undergraduate schools at Emory.

In 2004, the Piedmont Project expanded to encourage graduate student engagement in curriculum development, as well.  Students participating in the workshop develop a new course syllabus in the subsequent summer.  Their impact is expanded with a campus outreach project, such as a departmental brownbag, film screening, conference, or outdoors activity.

The monthly Faculty Green Lunch Group, which hosted talks and discussions for seven years, a series of four Climate Change dinners, and many speakers and conferences have been outgrowths of the Piedmont Project.