Perception of a Dress

A recent picture of a dress has taken the internet by storm. Someone posted a picture of a dress online and many people view the dress as blue and gold and a comparable amount of people view the dress as white and black. This simple dress sparked hot disputes all over the world. Although this discussion of the optical illusion dress seems totally irrelevant to our discussion of knowledge, as Megan Garber points out in her article in the Atlantic, it creates a point of discussion where people discuss where they fit into the world.

Garber indicates that our population’s inability to come to a clear decision on what color the dress “caused us to question the physical world and our place within it,” thus indicating that the lack of a clear answer leads to confusion and questioning. This concept of questioning is similar to the way Socrates argued that by learning about one’s lack of information they are actually becoming more intelligent, a concept clearly depicted in the debate over this dress.

Similar to the way Hegel and several other philosophers discuss perception as the reason behind the lack of true knowledge about any particular subject, Garber argues that “perception is relative and also that while facts may be sacred they are also uncomfortably unsteady.” In Hegel’s Phenomenology of Spirit he discusses how even though our immediate “sense-certainty” is probably the most true knowledge, it is also the least true due to our lack of understanding (91). This concept directly applies to Garber’s argument that although we may perceive the dress a certain way (the establishment of “sense-certainty”), that perception is actually very “unsteady” due to a lack of concrete knowledge about the object.

It’s incredible that a piece written by Hegel in 1807 to study and understand the way our mind functions is still extremely relevant in 2015 in internet conversations revolving around arguments as silly as the color of a dress. This article provides a lot of validity and a concrete example for the complex and often ambiguous arguments that Hegel makes in his piece. The entire time I was reading Hegel’s piece I struggled to establish a strong connection to today’s society, but after reading this article all of Hegel’s esoteric arguments seem far more concrete. 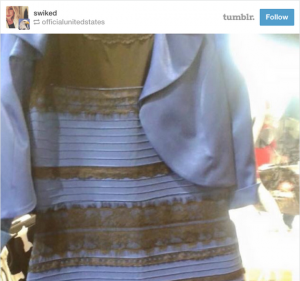 2 responses to “Perception of a Dress”