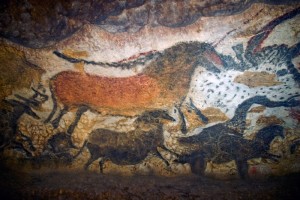 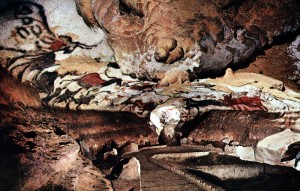 Looking at the paintings anthropologically, I learned these paintings were created my anatomically modern humans and prove their lifestyle of hunting in a collaborative group. From an art history perspective, I learned the portrayed animals may be an attempt at “sympathetic magic,” or magic predicated on the belief that actions performed on one thing can supernaturally affect another if the two have a sympathetic connection, or resemble each other like the paintings of animals. We also looked at the pigments and perspectives, and wondered why the paintings only depicted animals and people, never plants or vegetation.

These paintings can be looked at from many perspectives, and I think we could look at them from a philosophical perspective as well. For example, Hegel identifies true knowledge in the “I” and that the knowledge others have of us helps form our identity. My question is, did the people that created these paintings have the knowledge, identity, and the higher level of thinking we have today? In the paintings the people clearly demonstrate themselves in relation to others, hunting in group, so did they have encounters like the lord/bondsman in Hegel’s piece? By creating art, are they demonstrating the knowledge they learned in their environment through sense-certainty? Is there a reason they did not include plants in their pieces?

I know most of these questions cannot be answered, but I think they are fun to speculate.