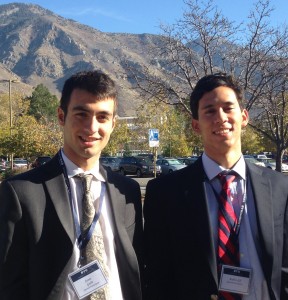 Andres Gil and James Gullo seized second place in the Business Language Case Competition hosted by the Marriott School of Management at Brigham Young University November 7, 2014. En español, the team worked for a week on their recommendation that the Swiss Bank Alpen not immediately enter the Romanian credit card market. Few teams took this contrarian view, but it paid off for Goizueta. After two rounds and some grueling questions from judges, the three finalists were announced after lunch. The judges were impressed with the Goizueta team’s analysis and their handling of the Q&A. Tom Bishop, VP of Product and Manufacturing at Skullcandy was the keynote. Networking with the judges, many of whom had multiple international assginments, was an added perk to participation – in addition to the awesome views of the Wasatch Mountains from the BYU campus.

This entry was posted in Around the World, BBA Student Achievement and tagged case competitions. Bookmark the permalink.