Downstream and downhill from the pizzazzy intense way-post hippie new age capitalist vibe of Sedona, with its spa resorts and T-shirt shops and boutiques and major traffic jams and eye-popping canyon beauty on all sides is Cottonwood, 15 miles and only as many minutes away on freeway 89A.  It is a world apart, but also the seed of a hypothesis about how rural America relates to its larger towns and smaller cities. 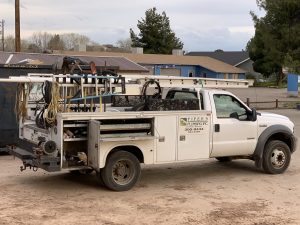 Cottonwood gets and has gotten the spillover from Sedona.  And in some ways, it would be a nicer place to actually live.  At least that’s what most people from there say – as well as having housing costs only a bit more than half of what Sedona now demands. A range of people we talked to prefer Cottonwood, especially those with families and raising kids.  The pace is slower.  People don’t seem so concerned about money (though qualifications on this further below).  Many of those tending or running shops have come from elsewhere, and don’t want to leave.  Others are locals.  The server at Bocce’s, a life-time local, is delighted to raise his four kids in the town.  Barely forty, he’s worked there for a dozen years and enjoys it so much that he’s never thought of another job.  His co-workers feel the same, he says, and many of them have worked there since the place first opened. He himself learned to be a pastry chef but prefers being an extraverted head server at this pizzeria where the flour is imported directly from Italy and the mozzarella is made by hand onsite.  It is actually the best pizza I have ever tasted.

Cottonwood gives an air of being friendly and relaxed and a bit funky.  Who would think of the Ledbetter Law firm having a sign that looks like that from a 1950s drive-in. 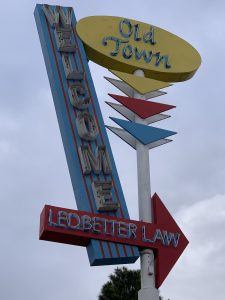 The stores close at 3pm for the Equinox, even the day before, on March 20.  It seems no one wants to work TOO hard. Artists and artisans have descended from Sedona and beyond to set up studies and run galleries.  One of the boutique proprietors came from Orange County, CA and loves it in little Cottonwood, where her daughter can walk to school.  Bringing a bit of business experience, she says that she runs a progressive business – with good sales – using only suppliers who give part of their own profits to charity. She thinks people should give back if they are successful. 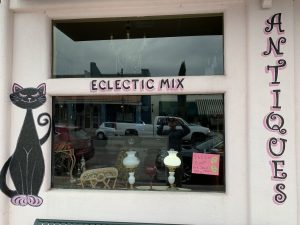 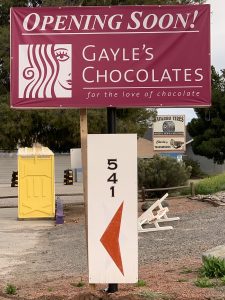 Wine country has also come to Arizona, and to Cottonwood, bigtime.  The climate is so ultra Mediterranean in its own way.  There are eight or more tasting galleries in Cottonwood – hard to believe in such a small funky town.  But the wines are quite good and well priced, and the customers down from Sedona and elsewhere keep coming.

What about politics?  Staunch Leftists abound, but amid surrounding gun culture and strong family values, many say they try to avoid politics and not talk about it much, lest good and decent interactions get messy and scratchy.

Of course we are only hitting the hi-brow veneer.  But there is also something interesting deeper.  When the 12-volt power outlet on our Lexus goes out, we pull into O’Reilly’s Auto Parts.  The guy is so helpful, attentive, deliberating with me which fuse type, and not wanting me to waste $2.99 until we can find the right one.  When my car manual is no help, he tells me to call John.  Since John doesn’t answer, I go to “Dynamic Combustion,” where the lot is so stuffed with cars I can’t get in the driveway.  The owner says with a friendly laugh he’d be glad to help me except . . . (sweeping his arm to show the extent of his unfinished business).  A trip to Advanced Auto Parts is equally revealing.  The mid-fortyish slim man with barely combed but slightly greased hair and belt a bit unlooped wants me to make sure I get things right.  Out in the parking lot with me, he gets to work and contorts himself under the dashboard with his second pair of needle-nose pliers – the first one was too big.  He manages laboriously to extract the cig-lighter outlet fuse – except we find that it’s not blown.  He dutifully puts it back and apologizes that I’ll probably need a real mechanic.  I get back in the car and find that John has left me a voice message.  He wants to make sure I got my problem fixed, and that I should call him back.  By now it’s late afternoon, and we need to leave the next morning.  But I call him back to at least thank him for following up. He is glad to talk and explains various things that might cause the problem, including an over-heated connection point in the car’s 12-volt socket itself.  He describes for me how I should tcheck the amperage on the device I’m running off the car outlet, and so on – knowing full well that I can’t give him any business.  What a nice guy!  When we drive out of our motel to the main street to make a left, the woman in the right lane rolls down her window and makes sorts of all motions for us not to turn.  Surprised, then we look up to see the Sherriff’s car about to make a left right in front of us – and we remember that the “right turn only” sign means that our left turn would be illegal.  We yell back thanks to her for saving us from a traffic ticket, wait for the Sheriff to turn, and then alter course and turn right instead.  Nice woman!

Even the Pines Motel is a surprise.  At first we gird ourselves coming down off Sedona Diamond Resorts to a mere “motel” in mere Cottonwood.  In  case we miss the point, the words “Motel” appear brightly lit up all around the place. 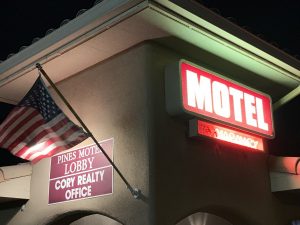 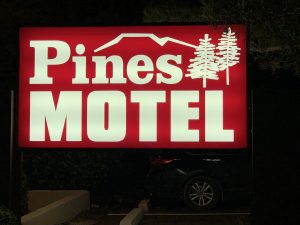 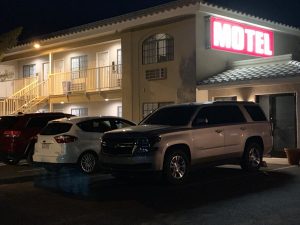 But the place is incredibly well appointed and well run.  The internet service and strength is the best we’ve had on the trip, the sheets really clean and fresh, plenty of USB and other power outlets in the most well-thought of places, some designer touches in the room, nice really hot water at any time of day, a good sized fridge and microwave, and two covered picnic tables outside with a view of the mountains.  The proprietor has had the place for 12 years; he says business has been good and getting consistently better.

Of course there are also class differences in Cottonwood.  A few blocks from the main drag are trailer park homes and equivalent that look very poor, some abject, with dirty laundry hanging out front.  Rows of small old cookie houses seem sparse and not well maintained, sometimes with junk in the yard and someone sitting vacantly on the front stoop.  I surmise that for those who haven’t made it into the “new economy” here, especially as they age, things are very very hard.  But at least those with education and some business or trade experience, along with those who flock here from elsewhere, keep things pumping along.  Those who have lived here a decade and more say things have in general kept getting better and better, and they don’t think of leaving.  The most consistent theme we found was that people said they enjoyed having a sense of community with each other.  As we drove through town on leaving, we saw this writ large on the side of an erstwhile warehouse building. 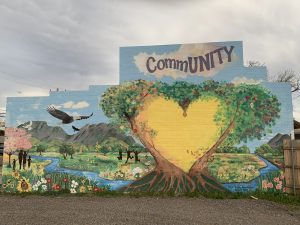 “Downstream” further from Cottonwood are other yet smaller towns, including Clarkdale and Jerome, the latter perched high on a hill that feels like a mountain, by an abandoned old mining quarry.  As Cottonwood gentrifies and its historic downtown grows, yet cheaper housing, good views, and casual lifestyle become more attractive at these smaller towns yet further afield – a bit like Cottonwood’s own relation to Sedona perhaps 20 years ago. These smaller towns are yet funkier than Cottonwood, especially Jerome, which has a vibrant art and music and restaurant scene, perched in tiers on switchbacks high above the valley.  It has the air of an actual artist’s colony.

Jerome and Clarkdale, like Cottonwood, have their own problems, to be sure.  And I didn’t have time to explore these.  The poverty of those who aren’t engaged in the newer economy can be, and certainly is, very real and deep. But at least these towns are attracting their home population to stay, and others to come.  Downstream from Sedona, they have a greater sense community — a freshness and creativity that the tourist hub itself seems to have lost or at least so fully capitalized as to have outpriced itself.

Such downstream cultivation will and would be and is of course different in each region and state and locale of the U.S.  But it would seem to provide some rays of hope, amid the hollowing out, if not the bottoming out, of rural America in places not so urban or urbane as those on the beaten path. 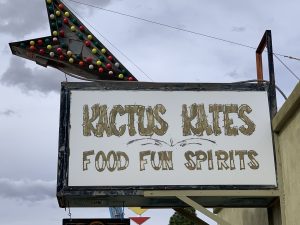 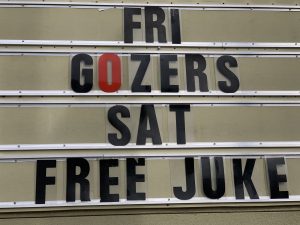