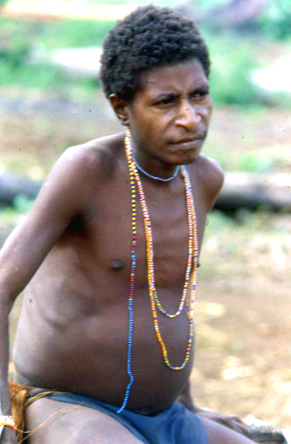 1. Sorcery case: Halia, an initiate who died eleven days after the male initiation.  The medical reason for Halia’s death is unknown, but it is possible that he died from a ruptured spleen that had become enlarged due to malaria.  Gebusi believed Halia’s death was caused by parcel sorcery (bogay). 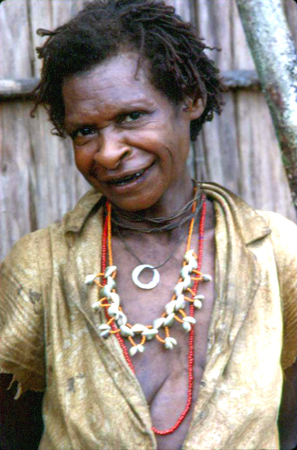 2. Sorcery case:  Tosipi, an elderly widow of Yibihilu and Yuway’s father’s sister.   Tosipi was accused by Swiman’s spirits of killing Halia through parcel sorcery (bogay).  Since Halia’s brother, Salip, had previously married and then divorced Tosipi’s daughter, the old woman was implicitly thought to have resented the failed marriage and taken revenge by killing Salip’s brother through sorcery.. 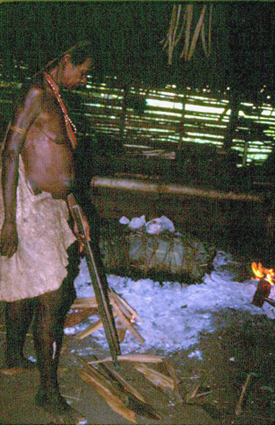 3. Sorcery case: Tosipi is forced to cook a divination sago.  A fish placed inside the large mound of wet sago and wrapped with leaves must be fully cooked to prove Tosipi’s innocence.  In the photo, Tosipi is tending the fires, but it is very difficult to ensure a positive result.  The suspect can also be found guilty if the sago or the fish inside are overcooked. 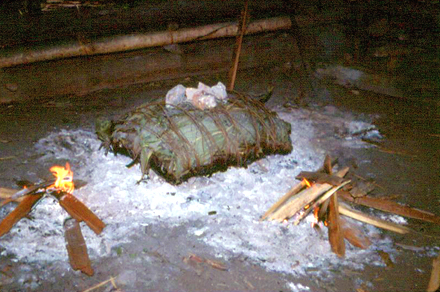 4. Sorcery case:  Tosipi’s divination sago is cooked using an unusual low-heat method in which heat is supplied by peripheral fires and only a few cooking stones on top of the packet.  The packet is cooked on Halia’s hearth – the hearth of the person that the sorcerer is accused of having killed.  Villagers said that the warm hands of Halia’s deceased spirit would add heat to cook Tosipi’s packet if he wanted to “accept” the food and indicate that she was innocent of sorcery.  To indicate her guilt, his spirit was believed to withdraw its warm hands – thus leaving the packet undercooked. 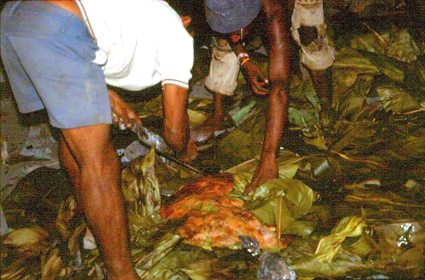 5. Sorcery case: A neutral man who lives toward Nomad cuts open Tosipi’s divination sago. Opinion differs as to whether the food inside is completely or only partly cooked. 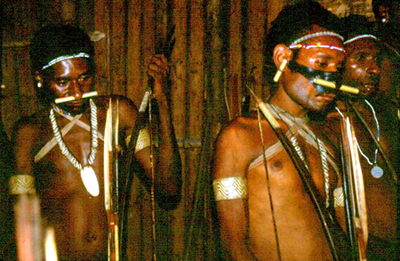 6. Sorcery case: Tosipi’s supporters, including Wahi and her son, Haymp, carefully watch the opening of the divination packet while holding their bows and arrows. Eileen and I stood with Tosipi’s supporters to indicate our allegiance with them.  Eileen’s taking of flash photographs reminded everyone that we would have visual evidence of what was happening.  Our presence may have had a small role in forestalling violence against Tosipi. 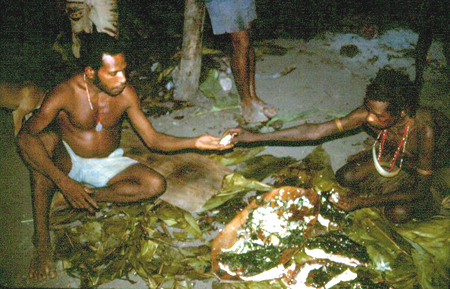 7. Sorcery case: Tosipi extends a piece of divination sago to Halia’s surviving brother, Salip, to eat.  If Salip choked on or vomited the food, it would have indicated Tosipi’s guilt. 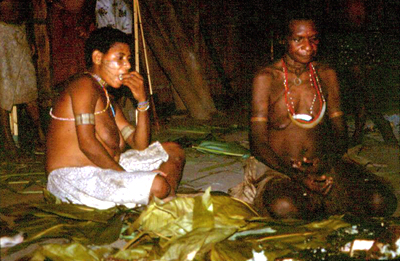 8. Sorcery case: Tosipi sits deferentially while Halia’s sister, Mus, eats a piece of the divination sago.  Though Tosipi was not formally found guilty of sorcery, she remained under a cloud of suspicion.  She and her relatives moved out of Yibihilu shortly after the divination was completed.  They founded their own small hamlet settlement about thirty minutes’ walk from Yibihilu.  Tosipi was not killed but died a natural death in the late 1980s.