There are many personal theologies present among the congregants of First United Methodist Church of Chipley (FUMCOC) due to fluid movement between denominations over decades. One of the many points of contention caused by their non-homogenous theological beliefs is how, or even if, God reveals Godself in a secular culture that is not explicitly related to traditional Christian tradition, theology or practice. Some congregants believe God is present and active in non-Christian institutions and media. Others outright reject that belief. This may result in an understanding of church that inhibits transformative engagement with the world. Therefore, it is important to understand how they interact with and understand the world around them to better understand and hear what secular culture itself is proclaiming about God’s Creation which is deemed “good”.[1] 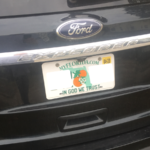 The “In God We Trust” license plate option is highly popular in Washington County (FL). 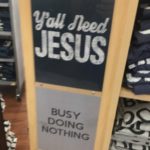 Apparel that expresses Christianity to others is prevalent throughout Chipley, FL.

The First United Methodist Church of Chipley (FUMCOC) is a congregation located in the Florida Panhandle town of Chipley. There is a by no means a shortage of outward signs of the Christian faith present throughout the community. This includes the popularity of “Christian” greetings, personal apparel, and even vehicle license plates and stickers. The concern arises whether these outward signs of God’s good graces might push those who do not hold a Christian worldview into the cracks of local society, away from the dominant Cultural Christianity of the area. That congregants of FUMCOC will deem unchurched persons “outsiders” is also a concern.

I believe, as the lead pastor, FUMCOC must make it a priority to seek those outside and alternative voices to give voice to those marginalized people. Through understanding those voices, the presence of God can become more easily recognizable in those unexpected places.

Therefore, my project thesis proposed the following: exploring non-Christian popular music alongside Scripture can facilitate dialogue to increase understanding about how God may be working beyond the Christian community and thereby challenge insular conceptions of church.

Throughout the history of Christianity beginning with the New Testament, there has been ongoing proclamation about the Kingdom of God and/or the Kingdom of Heaven. This kingdom is a metaphor about how the world would function and exist under the full and realized dominion of God, and by extension Christ. Jesus also told many parables on the nature of the Kingdom of God, and how it stands in contrast to the dominant worldly cultures and structures of the time.

To test and explore the thesis of my project, a three-sermon series was developed and preached that aimed at reaching the most people with the least effort. Also, a small group was formed to explore more topics and genres, but with fewer people.

The Sermon Series acted as the anchor of the project due to its ability to reach a broader audience. Each sermon paired a relevant song by an artist or group with a biblical passage. There were sermon talkback sessions after the sermon consisting of thirty individuals if varying ages, genders, and theological leanings.

Sermon talkbacks included music, video when available, and the following conversation-starting questions: Did the song and the Bible passage work together? Before you heard the sermon? After? Was the blending of music and Scripture done in a meaningful way? Was it gimmicky? Are there songs that resonate with you that are secular in which you can feel the presence of God or hear God speaking to you?

The focus and elements of the Weekly Small Group were much the same as the sermon series—biblical text, relevant song, and questions to foster theological discussion. The difference was that the only thing brought into the discussion was the songs to be explored. No pre-determined scripture, theologian, or theological concept was brought to the meeting. This was done to foster a collaborative environment so that the participants could begin to develop their own theological savvy and conjure up their conceptions about how God can use popular music to speak into the Church.

The limitations encountered during the project were surprising. Some people liked the sermon simply because they liked the song or artist. Others liked the music, but not the lyrics. Older congregants liked the fusion of popular music and Scripture while those under the age of forty thought that is was gimmicky. The Sermon Series reached the greatest number of people but limited individual interaction. On the flip side of that, the Weekly Small Group reached fewer people, but those who participated were deeply involved in the process and more enthused by further exploration of how God uses popular music.

On more positive notes, the sermon talkback sessions and small-group meetings fostered deep conversations about music’s place in understanding God and God’s work in the world. Many disagreements arose regarding many of the topics, including the relevance of the whole project. However, a more cohesive view did emerge over how non-Christian outlets can inform FUMCOC about God’s work in the community and beyond. Several participants spoke of listening to popular music at home, work, and during commutes to discern what God was revealing through the artist’s interpretation of the world around them. A surprising revelation was that one of the most ardent opponents of using secular music in the church told a story of how they heard a song on the radio in the car while traveling with their child. This person said that a conversation ensued about how, while it is not overly clear on the surface, they could hear how God speaks to them through the lyrics.

Using popular music to inform FUMCOC how God is working in and around unexpected places is a concept with which most congregants are now comfortable. As a church that is growing and attracting previously unchurched persons and families, this concept can be used as a tool of understanding. It can also be used as a bridge to understanding how people outside of the church view the world. Most of the conversation, group and individual, that took place during this project led me to believe that the participants were beginning to understand that popular music is a great tool for understanding culture. The sermons, group meetings, and conversations also spurred some congregants of FUMCOC to engage with others beyond the church in a more open and honest conversation about Christ and culture. Most of those conversations took place within family or friend groups, but it was a big step in challenging the limited concept FUMCOC had about the church and Christ’s relation to culture.