When Haiti is mentioned, what immediately comes to mind?

Despite being home to an ongoing humanitarian crisis, Haiti remains largely “out of sight, out of mind” in North America. When Haitian news does reach a global audience, it’s usually in the context of an earthquake, hurricane, outbreak of infectious disease, or reasons of political unrest. The stories we do encounter remind us in sobering ways that Haiti is the poorest country in the Western Hemisphere.

These stories remind us of immense human suffering at the hands of extreme poverty. Just a 90-minute flight away from America’s abundance, the crippling poverty and lack of adequate resources is a scandal of our shared humanity.

But there is another scandal looming when it comes to Haiti. The scandal of revisionist History that has been forged leaving many in North America unaware of the legacy of Colonization, slavery, and systemic injustice that have created such deprivation.

Haiti is the poorest country in the Western Hemisphere, but have you stopped to ask why?

My passion for Haiti developed in 2011 while serving at Abiding Hope Church in Littleton, Colorado, where I was introduced to The Haitian Timoun Foundation (HTF). 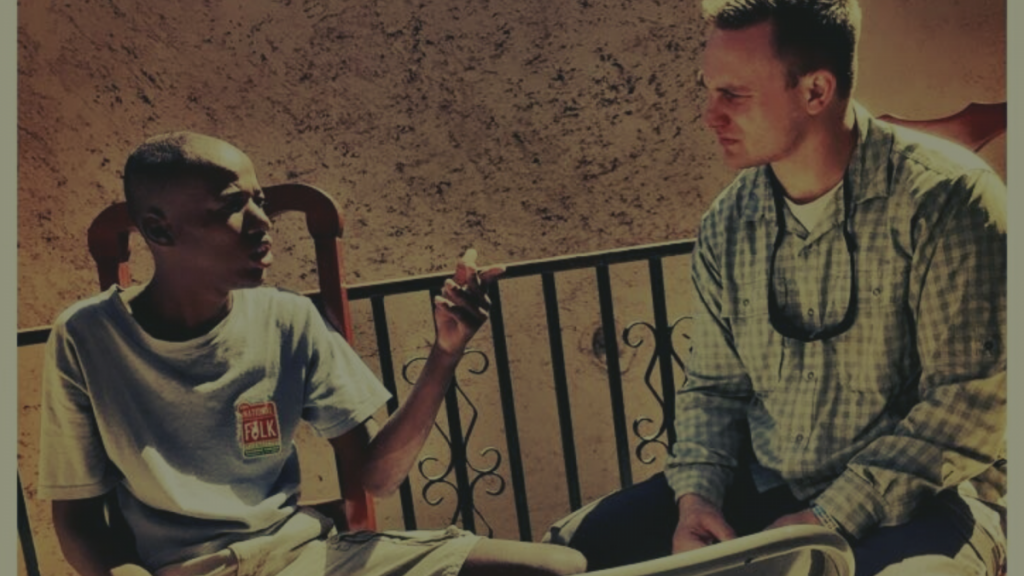 Personal photo of me in Haiti from 2011

As an intern pastor at Abiding Hope, I traveled on an immersion trip with HTF alongside other congregation members, where the tenacious spirit of the Haitian people grabbed hold of me in a powerful way. Today I serve as Chair of the Board for HTF and the Executive Pastor at Prince of Peace Lutheran Church in Loveland, OH, a congregation fully committed to walking alongside the Haitian people.

HTF’s primary audience consists of suburban congregations of the Evangelical Lutheran Church in America spread across the United States, with a significant presence in Ohio, Colorado, Nebraska, Georgia, Florida, and Texas.

For over twenty years, HTF has brought thousands of North Americans to Haiti on short-term “immersion trips” to experience first-hand the work of Haiti’s hidden heroes. Immersion trips are designed carefully to honor an accompaniment ethic of partnership while seeking to position the traveler as a learner and not a problem solver. HTF believes in promoting the Haitian people’s indigenous leadership and is committed to fostering long-term relationships between North American donors and the Haitian organizations working to create a more just and equitable society.

Specifically, my Doctor of Ministry research was guided by the quest to gain feedback from past participants on ways our organization could better prepare travelers before visiting Haiti. If one of our immersion trips’ goals is to help North Americans understand and embrace accompaniment models of partnership, the question became for me: are there things we could be doing more intentionally in support of this goal?

“We understand accompaniment as walking together in a solidarity that practices interdependence and mutuality. The basis for this accompaniment, or what the New Testament calls koinonia, is found in the God-human relationship in which God accompanies us in Jesus Christ through the Holy Spirit.”[1]

My individual interviews and survey of prior travelers revealed a sobering reality. While nearly all participants were aware of Haiti’s extreme poverty, the data revealed that most were generally unaware of the historical forces that caused such deprivation.

Again, it seems as though most Americans do not know Haitian History.

To help educate future travelers, I created a 4-part guidebook titled: “Towards Accompaniment: Understanding the destructive forces of Colonization as we foster partnerships of dignity in Haiti.”  Focusing heavily on the destructive forces of Colonization, slavery, and systemic justice, this guidebook aims to introduce people to the key historical forces and events that have shaped Haitian History while striving to help people better understand our modern-day partnership context.

It is my conviction that in order to walk in solidarity and practice interdepence, we need to be aware of our shared history and how it impacts relationships today. 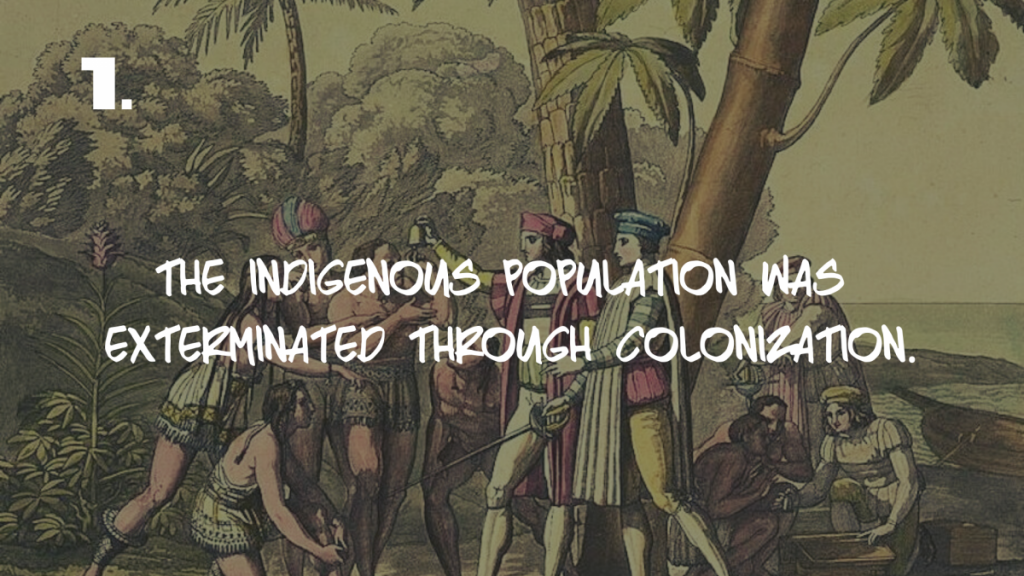 An illustration shows Christopher Columbus encountering a group of native people. Photo by the Library of Congress.

Hispaniola, the island currently shared by Haiti and the Dominican Republic, was “discovered” by Christopher Columbus in 1492.

As the Spanish called it, Santo Domingo became an outpost of the Spanish Empire, important for its position as a launching place for conquests of new territory in the Americas. The course of History for Santo Domingo was quickly set in motion: enslaved peoples were introduced in 1502, and the first sugar mill was erected in 1516. The first slaves were the native Taíno people, who dwindled from hundreds of thousands in 1492 to the hundreds by 1550.[2] As the indigenous population was dying of abuse and disease, African people were brought in as slaves and were exploited for hundreds of years as France and Spain grew their wealth. 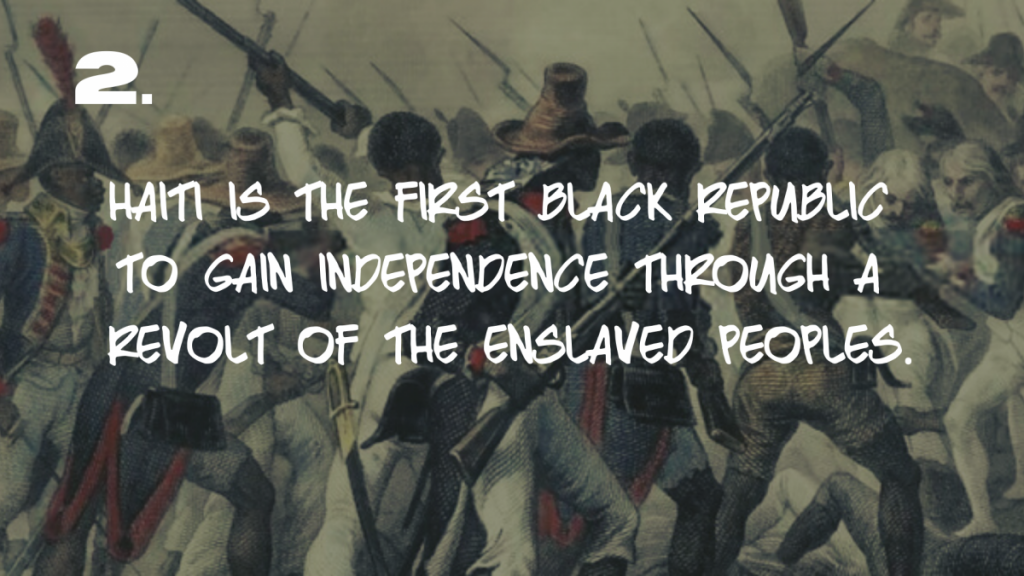 Illustration depicting combat between French and Haitian troops during the Haitian Revolution. From Histoire de Napoléon, by M. De Norvins, 1839

Under French rule, the enslaved population, which greatly outnumbered the colonists, began to organize, and in 1791 a rebellion started, which culminated in Haitian Independence on January 1st, 1804, marking the first independent nation in Latin America.

Haiti remains the oldest Black republic and the second oldest republic in the western hemisphere after the United States.[3] 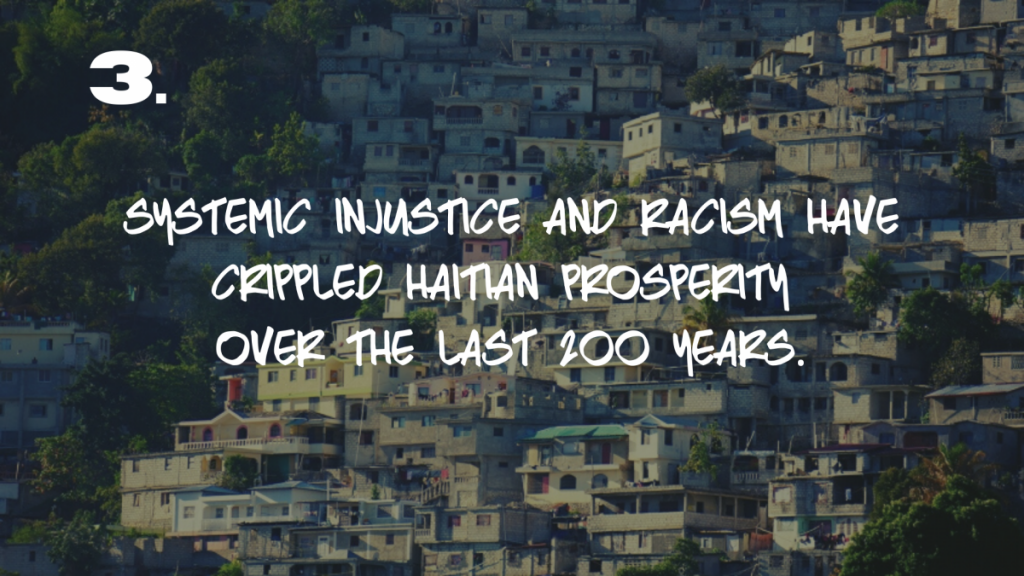 A free and independent Black Republic did not sit well with a world still engrossed in systems of slavery and enmeshed in racist attitudes.

From the onset, Haiti entered Independence with heavy debts, which hindered her upward development. Haitian Independence was recognized on condition. An indemnity of 150 million francs was to be paid and reduced customs charges on French vessels to half the amount paid by other countries. By complying with an ultimatum that amounted to extortion, Haiti gained immunity from French military invasion, relief from political and economic isolation – and crippling debt that took 122 years to pay off.

Haiti took out huge loans from American, German, and French banks at exorbitant interest rates to come up with the money. By 1900, Haiti was spending about 80% of its national budget on loan repayments. By the time the original reparations and interest were paid off, the country was trapped in a ­spiral of debt. In today’s valuation, Haiti’s reparations to France amounted to $21 Billion.[4]

To learn about even more challenges facing the new nation, watch this TED Ed. video

This short video from Partners in Health (An HTF connected partner) provides another overview worth watching. 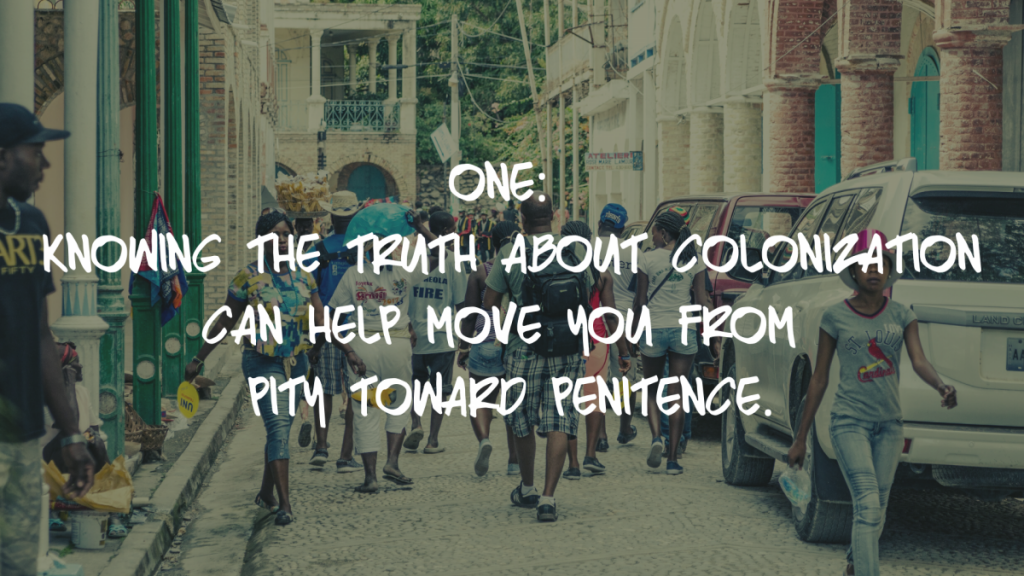 First, it helps travelers of privilege and wealth move away from feelings of pity towards those who suffer from extreme poverty and allows them to move toward penitence.

As people of faith who are called into global partnership committed to a theology of accompaniment, it is important to have a solid understanding of the past. To walk alongside the Haitian people is to walk alongside the generational entanglement of our cultures and shared history. 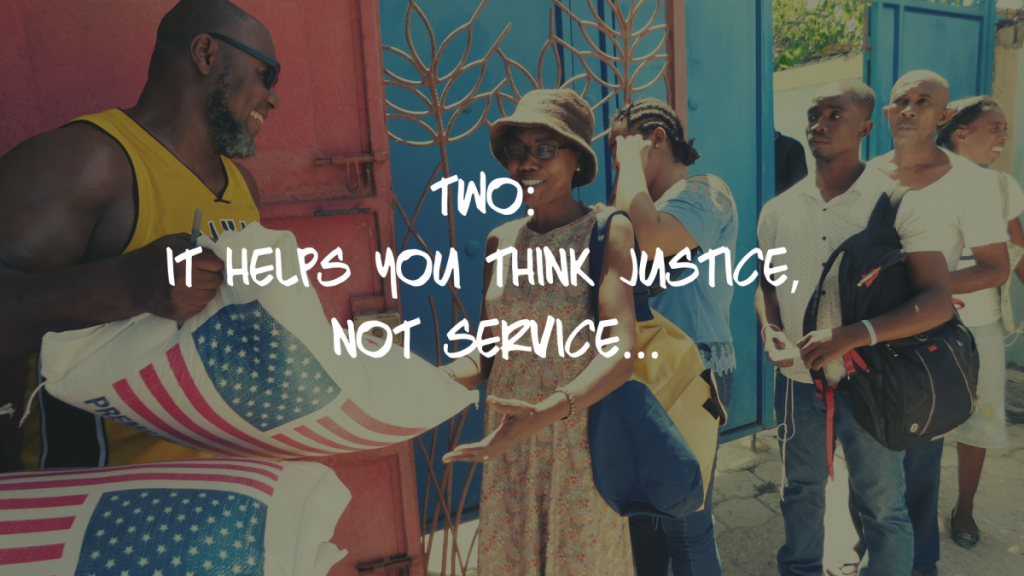 When all one sees is the poverty before them, it’s easier to respond to immediate needs. Pity can motivate service towards another, but a penitent understanding of global forces of subjugation invites one into advocacy for a justice that seeks to dismantle all remnants of Colonization. Extreme poverty in Haiti will not be ‘fixed’ through a million service projects or mission trips. Instead, Haiti’s systemic injustices need to be addressed as a global justice issue that will require a global response of investment and solidarity.

Understanding more clearly “why” Haiti is the poorest country in the Western Hemisphere should awaken people of faith to the reality that the dominant world powers over the last few hundreds of years have directly contributed to the despair Haitians currently face.

Instead of seeing the pain and suffering of those living in poverty and feeling “sorry for them,” we can begin to repent of the remnants of colonization and see more clearly that it’s simply Haitians we should feel sorry for. Rather, it’s the actions of past generations and current systems of injustice that disadvantage the poor while benefitting those with privilege. 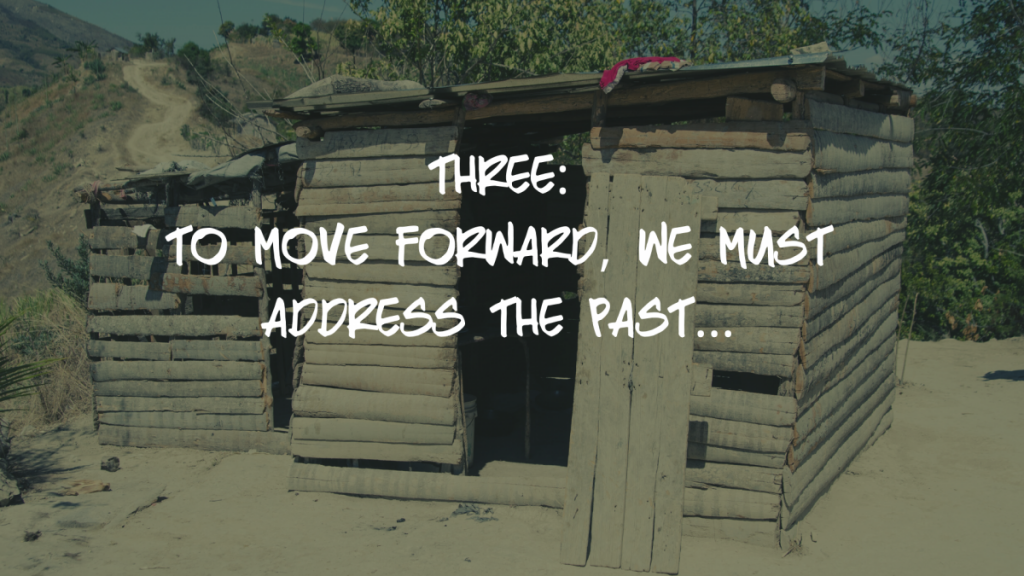 Finally, it is only in knowing the forces throughout History that perpetuate an abused and abuser dynamic that we can forge new relationships of true dignity and respect.

“…as we move from “other” to “partner,” the give-and-take of hospitality makes it possible for power to be shared rather than used to dominate.”[5]

Building relationships across cultures takes effort and work. If one is not mindful of the historical dynamic between two people’s cultures, they may unintendedly perpetuate a narrative from the past that positions one over another. Many well-meaning mission organizations, NGOs, and non-profits have entered into places like Haiti with good intentions, all the while perpetuating old power dynamics, reflecting the hangover of colonization.

Being more fully aware of these power dynamics should lead organizations to adopt a posture of humility that elevates indigenous leadership.

Your church or mission organization is not “bringing hope to Haiti.” Hope already exists in Haiti. It is found in the resiliency of the Haitian people who have endured pain and sorrow and yet carry on with the tenacious spirit of a people who continue to fight for freedom.

Does your church or organization have a global partnership?

Moving into the future, I believe organizations and faith communities committed to global partnership in developing countries have a responsibility to build authentic connections of mutual respect across oceans and borders and do so fully educated and aware of the historical and cultural forces created disparities.

If people of faith are committed to genuinely walking alongside the marginalized of this world, we ought, to begin with, a clear understanding of how those people became marginalized in the first place.

D.Min Project Innovation, Rev. Lorne Hlad: Towards Accompaniment: Understanding the destructive forces of Colonization as we foster partnerships of dignity in Haiti.

TED. Ed. Video “The first and last king of Haiti” by Marlene Daut 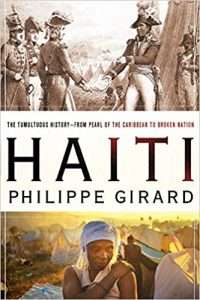 This work provides a comprehensive and riveting history of Haiti which highlights the complexity of a nation who faces tremdous odds to this day due to corruption, violence, and instability. 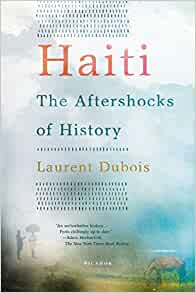 Dubois has written what many consider to be gold-standard in historical review of Haiti through the lense of the destructive forces of colonization. This book will engage a reader who wants to think critically about how systemic injustice works in our world. 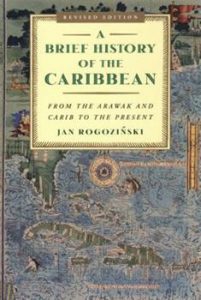 Looking for a broader history of the Caribbean? This book is an accessible yet thorough overview of the entire Caribbean region. This work also does a nice job of educating the reader on the indigenous peoples and their culture prior to colonial invasion.

Full Citation: Rogozinski, Jan. A Brief History of the Caribbean: From the Arawak and Carib to the Present. Subsequent edition. New York, NY: Plume, 2000. 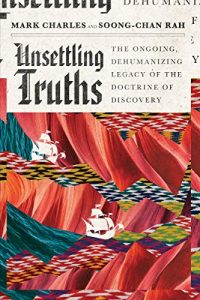 Have you ever wondered the role the church has played in colonization and the Doctrine of Discovery? I recommend this book for anyone willing to take a critical look at the way in which faith communities have been corrupted and used by the “empire” to exploit peoples for material gain.

[3]Rogozinski, Jan. A Brief History of the Caribbean: From the Arawak and Carib to the Present. Subsequent edition. New York, NY: Plume, 2000.

One Reply to “The Destructive Forces of Colonization: Three Things You Need to Know About Haitian History & Why it Matters”