America’s history demonstrates that White Supremacist thought became a racist reality. In nascent colonial America, the ideas of ethnic superiority were being developed and shared.  Eventually these ideas became laws and central to the establishment of the American way of life and belief.[1]  In Pulitzer Prize winner Isabel Wilkerson’s book Caste, she lists “The Eight Pillars of Caste.”[2] These are interconnected principles that form “caste hierarchies.”[3] These principles do not have to be true to be believed. They just have to be accepted as true.[4] Once accepted, they become immutable and an organizing concept of human structure, status, and importance.[5] I will posit that Wilkerson’s principles formulated the American version of a caste system that made it synonymous with white supremacy.[6]

This system of destruction of another group of people is often the first step towards conquest.[7] One effective way to dehumanize is to create what; in her TED talk, Chimamanda Adichie speaks of as “The Danger of a Single Story” and argues that having a single story or narrative is dangerous because it does not tell the truth or complete story.[8] “To create a dangerous single story is to show a people as one thing, as only one thing, repeatedly, and that is what they become.”[9] At least in the minds of those who desire that story or lie to be the convenient truth. John Dewey states that a belief does not have to be evidence-based.[10] In other words, when expedient, a lie will suffice and eventually become a belief. From the beginning of the formation of the United States, a pedagogy, a story developed that taught the superiority of White people over BIPOC people.[11]  Once embedded in the mindset of the society, it becomes invaluable for its purpose of domination, and the subsequent mistreatment of the dehumanized becomes acceptable.[12] 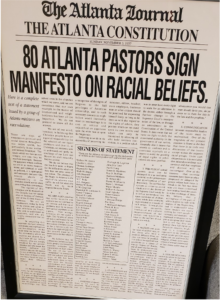 The Lutheran Church of the Redeemer is a 119-year-old congregation in the heart of Midtown Atlanta. Redeemer’s history includes a pastor named Robert E. Lee, which was one of the few in town pastors that supported Rev. Dr. Martin Luther King, Jr. and the Civil Rights Movement.

Dr. Lee was not without congregational critics that disapproved of his supportive stance. Today, I serve as the first Black Pastor on Redeemer’s pastoral staff as an Associate Pastor, and like Dr. Lee before me, my stands of liberation and public policy has drawn the ire of some congregational critics. However, our strategic plan calls for a ministry of justice and inclusion and that is why I have developed an innovation to educate our congregation on how racism and white supremacy operate in our culture.

In addition,  after collecting data that identifies evidence of sustained white supremacist thought at Redeemer, I will create a multi-generational congregational curricular of resources, including film, travel, and directed discussions that addresses racism and helps deconstruct racist beliefs. 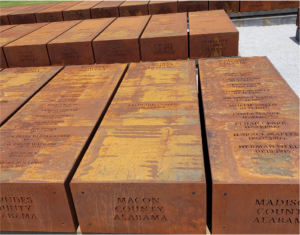 Having engaged this congregation during my innovation process, I have made a major discovery, the pervasiveness of opaque racism.  I witnessed this in 2019 when I led members of Redeemer to the Justice and Peace Museum in Montgomery, AL. After the visit as we, traveled back to Atlanta, GA, multiple people expressed their shock in learning of the 1906 Atlanta Race Riots and the number of murdered or lynched Black people. People who had lived in Atlanta, for decades were unaware of the event that occurred just a few miles from where this congregation currently resides.

“Race prejudice, is a social attitude propagated among the public by an exploiting class for the purpose of stigmatizing some group as inferior so that the exploitation of either the group itself or its resources or both may be justified.”[13]  Engraining prejudice into our subconscious explains how and why people respond to stimuli or stereotypes of Black people. People respond to stimuli with a familiar response called the availability heuristic.[14] With time, it becomes the first response to address an immediate situation.[15] In other words, habit.[16]

In her book, The End of Bias, Jessica Nordell recounts a simple experiment conducted at the University of Wisconsin, Madison, around “the force of habit.”  After the initial experiment consisted of students calling out colors when written in their color or written in a different color.[17] Professor Cox showed photos of people that were victims of Hurricane Katrina. In the images, one of black people and the other of white people engaged in the exact same activity but with different captions. The caption under the black people read “looting,” the caption under the white person read, “looking.”  Simply put, America has a long history of racism and white supremacy. I contend with proper training, this history will end.