Throughout my career, I have attended countless continuing education events and read a dozen books on church leadership all with the same theme: congregations need a clear mission and vision so that, together, we may efficiently grow the church and build the kingdom of God. Yet, despite decades spent emphasizing the importance of ‘mission and vision’, the church in much of the United States has failed to achieve the promised goals. Denominations are in a fight for institutional survival, pastors are wondering if they have dedicated their lives and careers to failure, and congregations are hurting and confused.  As I move through my ministry, I began searching for a new way to lead congregations to live into their unique calls with integrity and navigate the future with faithfulness. Over the past few years, I have begun to see hope in a movement away from a centralized focus on mission and towards a more decentralized focus on values rooted and vivified in story.

When I arrived in 2020, the congregation was once again searching for these answers. They had recently come through several pastoral transitions including an especially traumatic transition after the extraordinarily difficult and complex loss of a beloved pastor of 25 years. This loss filled the congregation and larger community with grief, pain, and conflict. Before healing had begun to happen, they entered into an intense time of focusing on mission, and vision. Due to the ongoing crisis within the congregation, these sessions proved arduous and deeply painful.  When I arrived there was a desire among many to re-engage in mission and vision work, and yet, there was also hesitation. The hesitation to re-enter the traditional setting for this work of structured leadership retreats was reinforced when the COVID-19 pandemic caused massive shut-downs and disruptions, just six weeks after my arrival. Rather than seeing this hesitation as an obstacle for leadership, I choose to embrace it as an opportunity to re-think the way that I as a church leader could help guide my congregation into the future. By ‘going back to the drawing-board’, I discovered the rich world of values-based leadership, decentralized organizations, and the power of narrative as life story. It is my hope that by sharing the story of Trinity Lutheran Church, I may encourage other congregational leaders who find themselves in the midst of traumas and transitions, and that by using story to unlock the historic values of that have shaped the congregation in past transitions they too may find a guide for future life together. 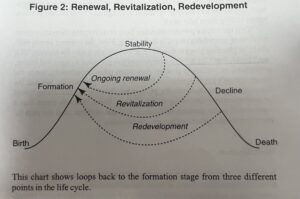 While the details of Trinity Lutheran Church’s story are unique, there are countless congregations across the United States that are struggling with their own past crisis, and traumatic transitions over the same back-drop of declining attendance and major societal changes. Some of the challenges faced by congregations are made visible in the image of a congregational life cycle used by consultant Alice Mann. In this image she demonstrates the phases faced by many churches: birth, formation, stagnations, decline and death. Mann prescribes a renewal of missional commitment as the regenerative response to terminal decline. Unfortunately, despite a consistent emphasis on the importance of mission and vision, churches across the United States have continued in numeric decline. One major reason for this issue may be the seismic shifts that are occurring within our society both secular and religious. This phenomena is described by author Phyllis Tickle in her work on emergent Christianity. Tickle builds on Bishop Mark Dyer’s observation that every 500 years or so the church undergoes a ‘rummage sale’. During the religious and societal rummage sale, everything is re-examined, and its value questioned. These moments occur, she suggests, with the meta-narrative that holds together cultural norms begins to ware. Congregational strategist Tod Bolsinger notes that these shifts call for adaptive rather than technical leadership. Adaptive leadership requires a sense of adventure and experimentation that simultaneously hold true to the core identity of the organization. 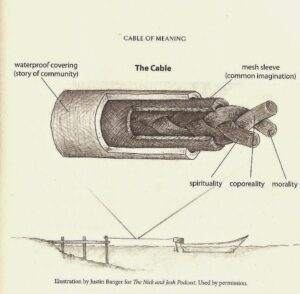 Phyllis Tickle, “The Cable of Meaning”, The Great Emergence: How Christianity Is Changing and Why (Grand Rapids MI: Baker Books, 2008)35.

I believe that by uncovering key historic and enduring values within congregation we can both stay true to that core identity and find a framework for experimentation moving into the future. Sociologist and story-teller Bréne Brown has spent years researching the role of values in inspiring leaders to make difficult decisions and famously uses the metaphor of the arena as the place where values, vulnerability, and leadership play-out;

More often than not, our values are what lead us to the arena door—we’re willing to do something uncomfortable and daring because of our beliefs. And when we get in there and stumble or fall, we need our values to remind us why we went in, especially when we are face down, covered in dust and sweat and blood.1

“Values, have the power to inspire dramatic and life-giving change within an organization because they provide the continuity that congregations crave.”

Values, have the power to inspire dramatic and life-giving change within an organization because they provide the continuity that congregations crave. Values have the power to endure over time even as their embodiment changes to meet the current cultural context. Rather than hosting a series of retreats as I had been taught to do,  another way to uncover the core values of the congregation is through intentional listening to story. Authors Ori Brafman and Rod Beckstrom have explored the power of decentralized organizations in their book “The Starfish and The Spider: The Unstoppable Power of Leaderless Organizations”, in which they explore the ways that these organizing make values based decisions to nibbly navigate changing contexts. This work helped me to understand that moving out of the centralized contexts of leadership retreats and into the dynamic and decentralized story of the congregation could strengthen ministry in our current context.

When a new pastor arrives, the church wants to share its story. As I entered Trinity Lutheran Church I listened with great care to the stories of the church. I listened to church members as well was community members. I listened for themes and changes. In particular I was attentive to the moments of greatest change and challenge in order to uncover the values that inspired and endured through change. In his work on entering a congregation, Roy Oswald emphases the importance of story, “Because our myths about ourselves control our behavior, it’s important that you be well grounded in this parish’s myth. Listen carefully as people put you in touch with this myth. As you listen, allow your natural curiosity about how they interpret their history to take over.”2 Researcher Dan McAdams suggests that it is through such stories that individuals begin to integrate their experiences into their identity. I would suggest that just as this is true for individuals, it is likely to be true for groups as well. So by listening to to the stories the congregation tells about itself we can understand who they are at their core.

Once I had begun to hear themes, I experimented with sharing those themes and possible values with the congregation and lay leaders. Through this process, I discovered that there were times I had misinterpreted their stories. The themes and values that I reflected back did not resonate. These moments forced me to listen again and anew. Importantly, in addition to listening to current stories I did archival research to listen to the stories of the past. In time, I did uncover values including the central value of hospitality that resonated with the congregation. We can now take these values and find new ways to embody them as we continue to connect with our context.

Can Our Church Live?: Redeveloping Congregations in Decline by Alice Mann

The Great Emergence: How Christianity Is Changing and Why by Phyllis Tickle

When a Congregation is Betrayed edited by Beth Ann Gaede

The Starfish and The Spider: The Unstoppable Power of Leaderless Organizations by Ori Brafman and Rod Beckstrom

New Beginnings: A Pastorate Start Up Workbook by Roy Oswald