The new Japanese reign name of Reiwa 令和 was released on April 1, and the compound immediately provoked consternation. What exactly does “reiwa” mean? Japanese government officials have focused on the second character, meaning “harmony.” PM Abe Shinzō, for example, explained that “Culture is nurtured when people bring their hearts together in a beautiful way. ‘Reiwa’ has such meaning.” (https://www3.nhk.or.jp/nhkworld/en/news/20190401_36/) The government also explained that reign name draws on a passage in the ancient Japanese poetry anthology, the Manyōshū.

But on the internet, cynics noted that the compound has an authoritarian sound. (https://www.asahi.com/articles/ASM416X59M41UTIL07Y.html)

So is “reiwa” a classical reference to harmony or an authoritarian code word? Here’s a quick text mining analysis of the semantic plurality of “reiwa.” 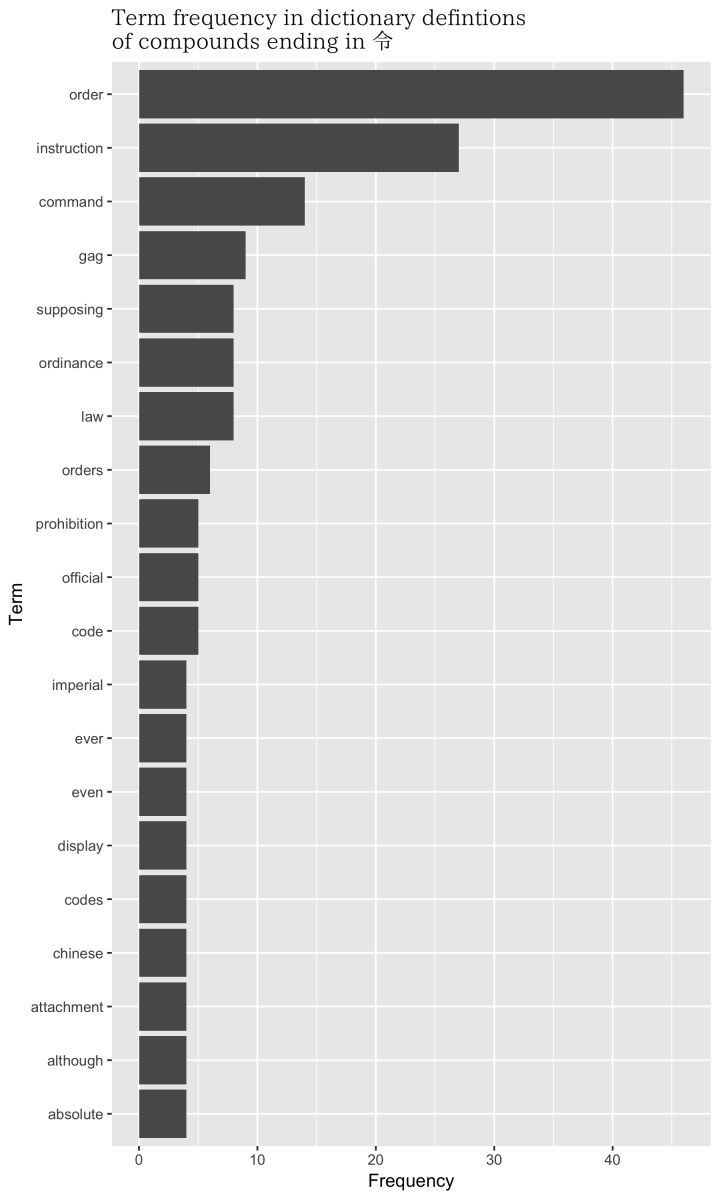 On the other hand, “rei” has different connotations when used as the leading character in character compounds. The term “reibun” 令聞, for example, means an illustrious reputation. In the compound “reitei” 令弟,  meaning “your younger brother,” rei is an honorific modifying tei (younger brother).  That honorific sense of “your” is the most frequent term in English language definitions of words starting with 令 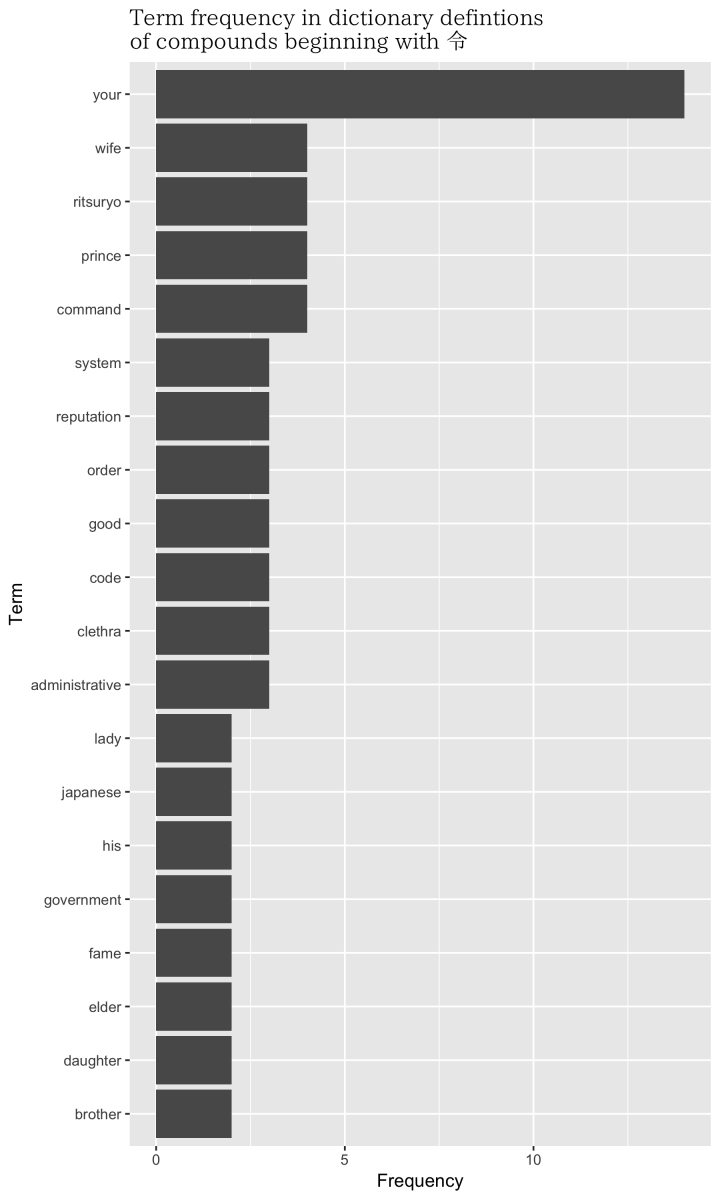 So why does “reiwa” sound authoritarian? Largely because the use of 令 as a leading character meaning “good” or “honorable” is now rare. How to judge rarity? One metric is the frequency of terms in Japanese Wikipedia pages. Remarkably, only one compound starting with 令appears in the top 20,000 terms: 令嬢 “reijō,” meaning “your daughter,” appears at 18,604. By contrast, “authoritarian” terms beginning with 令 are more common. “Commander” (司令 shirei) is 781 and “order/edict” (命令 meirei) is 1,234. 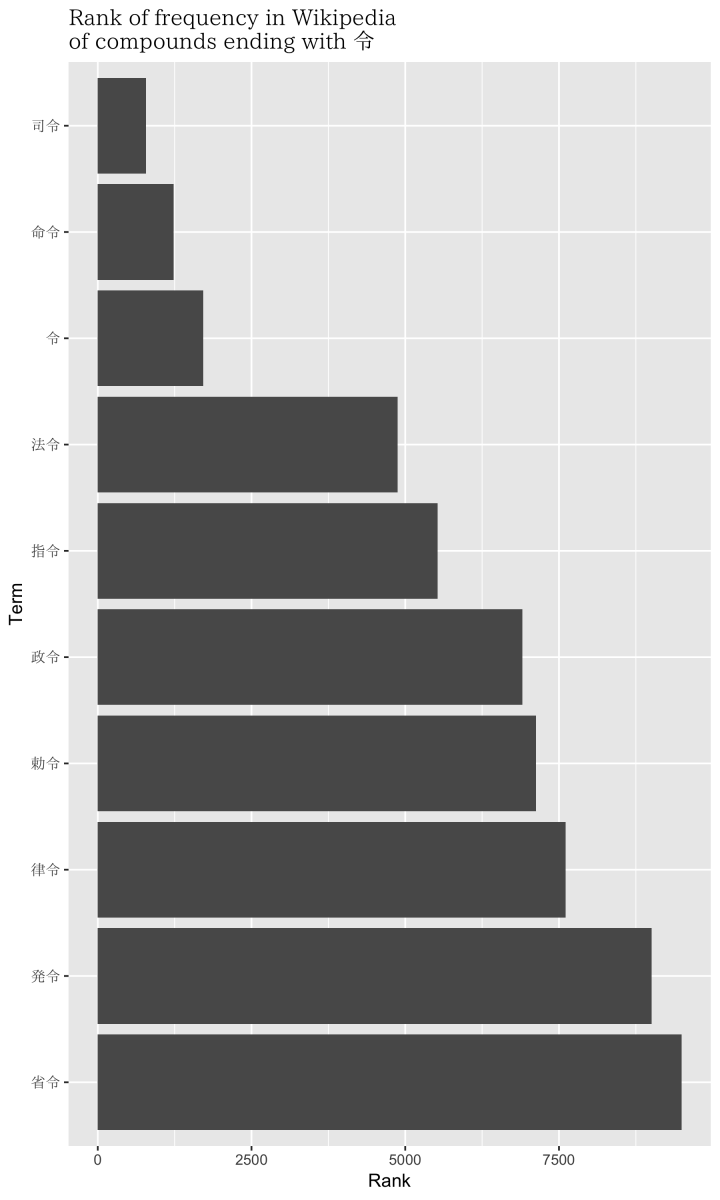 What does this all mean? Non-authoritarian meanings of “rei” survive, but only as relatively obscure linguistic fossils. By contrast, the association of “rei” with “command” is common. Federico Marcon has argued that using “rei” in the archaic sense of of “good” and “noble,” while ignoring its authoritarian aura, is akin to using “fascio” to mean “bundle,” while claiming ignorance of the term’s powerful links to fascism. That argument might be extreme, but popular unease with the new reign name can be grounded in the text mining of common usage.