“Sailing to Byzantium” by W.B. Yeats 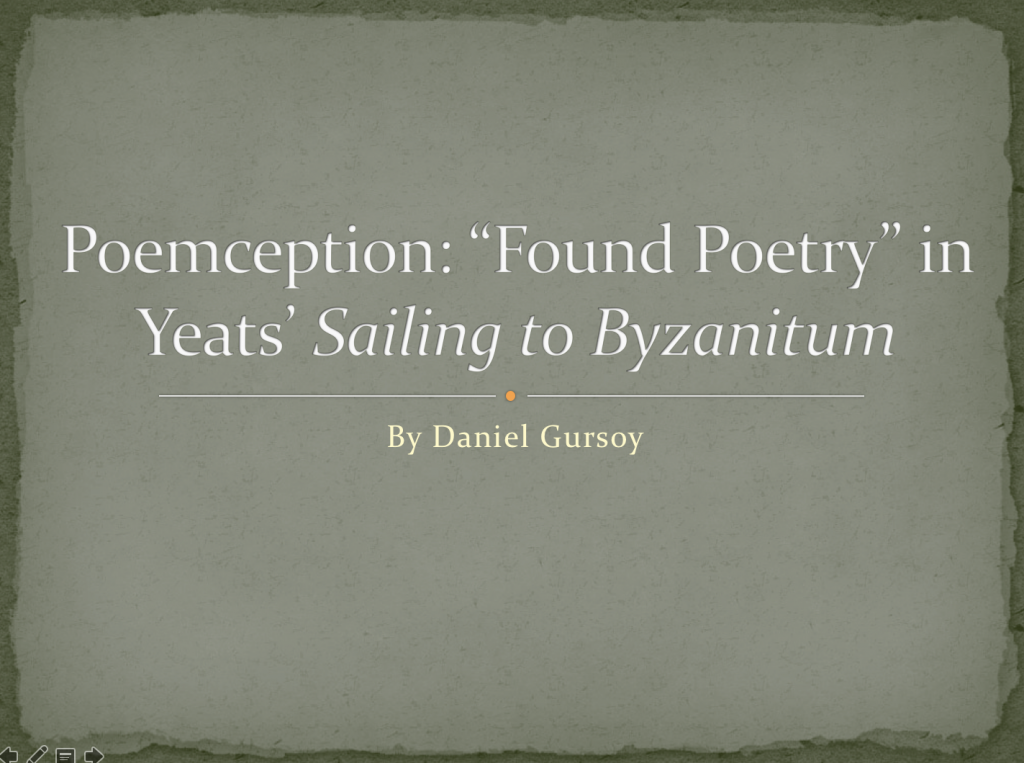 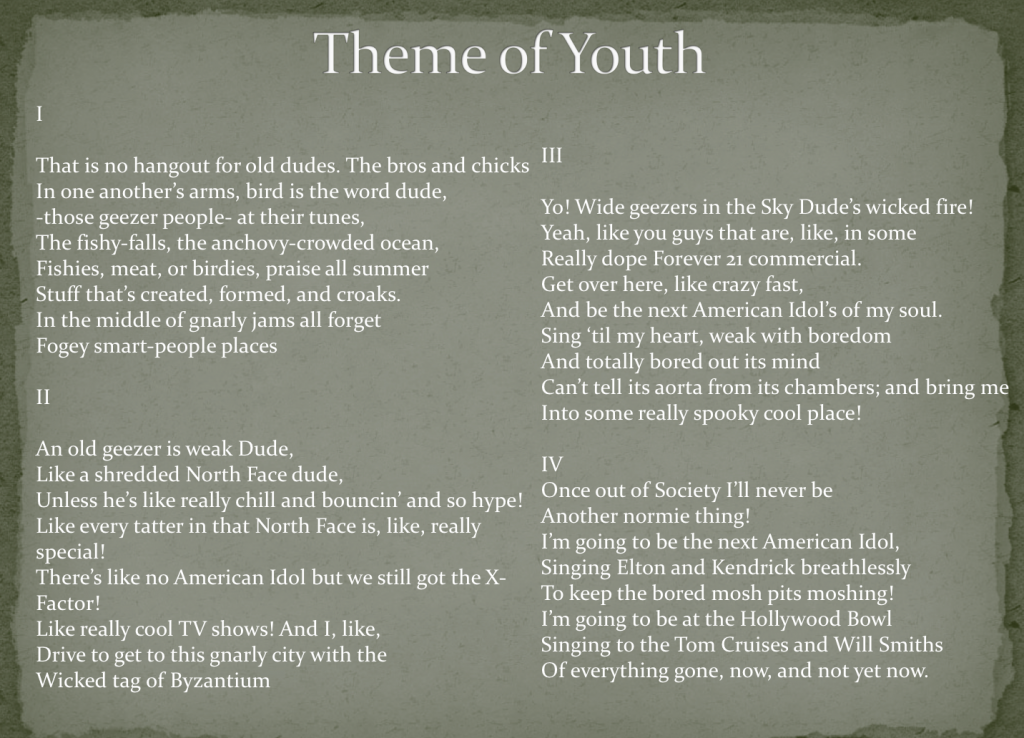 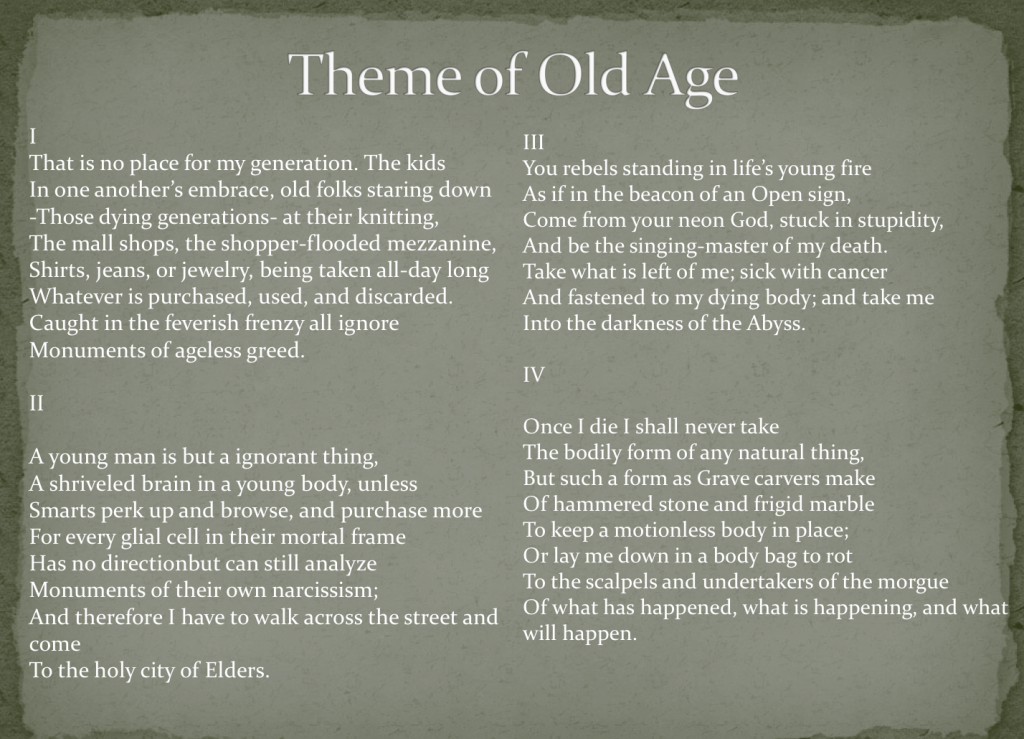 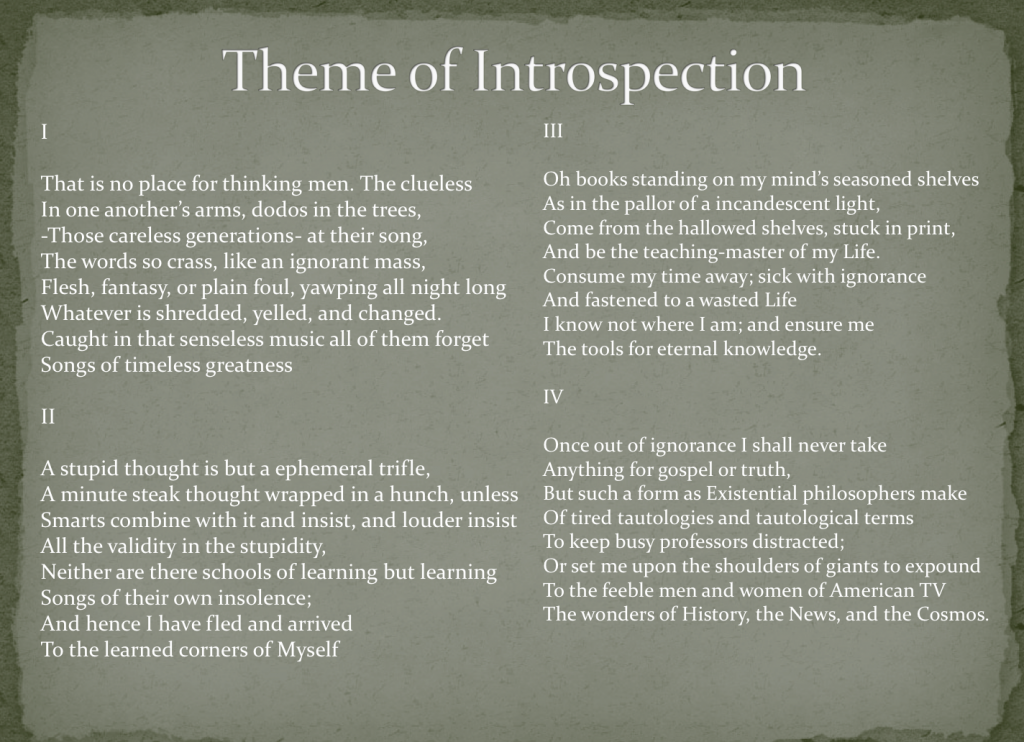 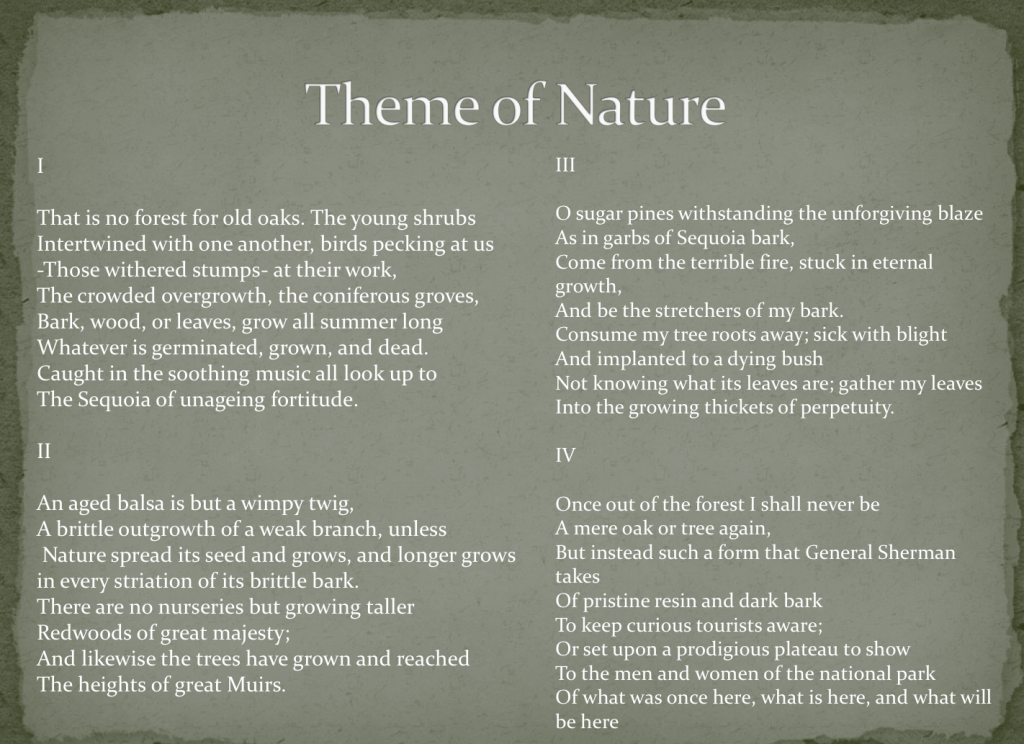 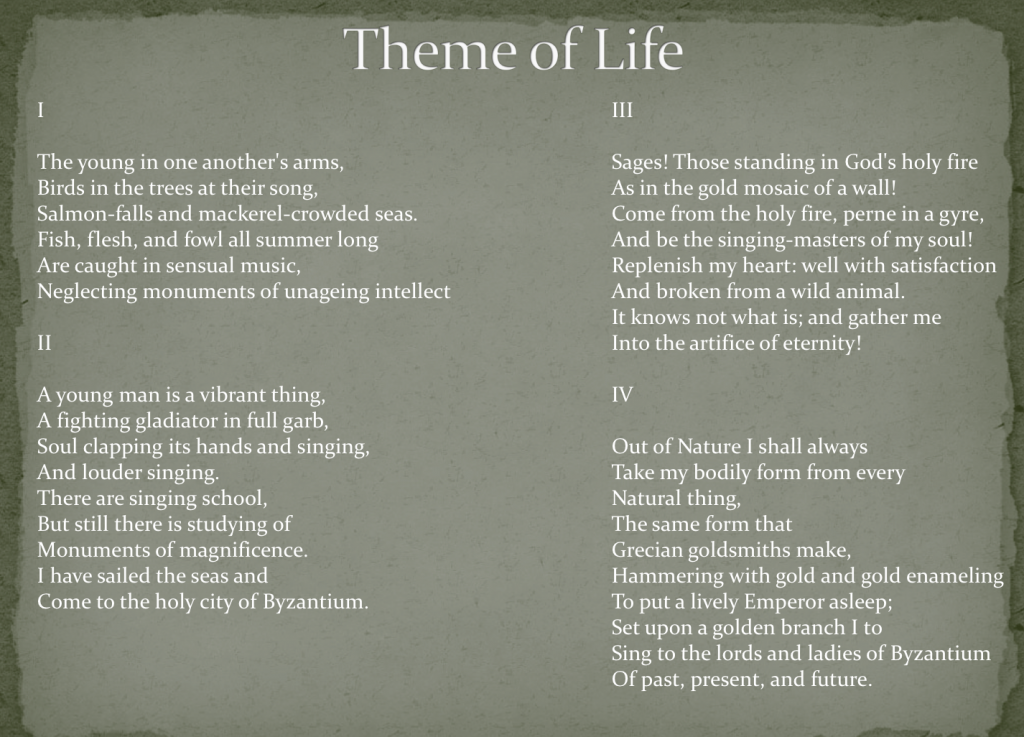 Great poetry is best complemented with great analysis. Some of the greatest commentators of our time have been able to transfigure readers into reading poetry English-language poetry in both deeper and broader senses. Where literary critics fail in deriving reasonable meaning out of texts, poets can take on the task and create new and original poetry that challenges preconceived notions regarding a beloved work in a literary canon. With this in mind I based my project around a literary device called pastiche, a device that overtly celebrates the original work. Pastiche, unlike its close literary cousin parody, focuses on dignifying the image of the artistic original rather than denigrating the content in a humorous or unbecoming way. In this regard it is a translation that uses fragments of the original work’s semantics and form to create a new work.

W.B. Yeats’ Sailing to Byzantium (referred to in short as Sailing) is a poetic rumination steeped in the tradition of the Shakespearean monologue that focuses on five key themes: Youth, Old Age, Eternity, Nature and Life. The beginning of the poem sets the stage for the appellation-like nature of this poem, with the first line having a tone that is almost conversational in construction (“That is no country for old men…), as if Yeats took a snippet from somebody in the midst of a conversation about the situation of those ageing in a world designed for youths. Thus “That is no country for old men” gets us into the pith of Yeats’ argument almost immediately, throwing at the readers the exclusion felt by those growing old in this “country for the young”.

With regards to formal qualities Sailing is a poem that is heavily steeped in the syntax of Western traditionalism, with its “ABABABCC” rhyme scheme and iambic pentameter connoting a very Elizabethan tone (basically the vocal register a Shakespeare monologue is delivered in) that highlights the dour theme of the poetic subject and the gravity of the poem’s main argument: that Youth, although wonderful, is inherently degenerated by the progress of Life, causing us to become enamored with more frivolous passions (“sensual music”) and consequently ignore more meaningful pursuits (“…all neglect Monuments of unageing intellect”) until we fall victim to the perils of Old Age.

The overall irrelevance of the poem’s titular location, Byzantium, was the biggest impetus in the writing of my pastiches, as the “holy city” that Yeats’ seems to intent on clinging onto is really just a fill-in for any distant and arcane land that could act as a transport from the existential problem of the present. Much like how Coleridge uses Xanadu as an idealized paradise in Kubla Khan or how Byron refers to Greece’s idyllic ancient past in The Giaour, Yeats deploys the image of Byzantium as a concrete object that the reader can associate with “eternal wisdom” and “rejuvenation”. Therefore it is not important that Byzantium is used in the poem; any city, location, or ideal could be filled into the point of the poem’s verse where “Byzantium” appears and it would still make sense. With this in mind I knew pastiche would be an effective ways of translating the poem’s meaning into something more original.

With the irrelevance of the poem’s titular location in mind, I decide to focus on fleshing out the built-in themes of Yeats’ poems to create five new poems based on each individual theme. The first reimagined poem focuses upon Youth as its primary theme. The original syntax and line construction of Yeats’ poem was retained so that the translation was more “accurate”, even though the poem’s vocabulary content was going to be changed into the diction of a “SoCal surfer dude”. Youth as a pastiche came across as an on-the-nose parody of “trendy youth culture” that would not be too out of place in Kurt Vonnegut’s The Breakfast of Champion. The “Vonnegutian” Youth pastiche served as an excellent jumping ground for my next pastiche, which was centered on Old Age. I decided to write this poem in the style of a rebuttal to the claims brought up in the preceding Youth poem, acting as a sort of “senile counterbalance” to the pervious poem. Introspection is at the center of the speaker’s world in Sailing, with his pondering on “Man’s” place (hence the title). The forces of Old Age and Introspection coalesced in my Nature-centric poem to create something that resembled a sort of “Ode to Old Arbors”.

Success in translating Sailing can be determined by how much of the original form and effect is retained in the pastiche-oriented translation. In this light a successful translation is one that retains the serious intentions of the original poem whilst also having a radically different setting. Some experiments worked better than others. The pastiche on a theme of Youth was quite dissimilar to the original’s diction and its form was only superficially similar to the form of Yeats’ poem. None of the Elizabethan tone was retained, creating a rather jaunty little comic piece that retained no serious overtones in its rhythm or pacing. In short, the Youth pastiche was an ineffective translation that was asinine and retained none of the urgency that made Yeats’ poem so memorable. In contrast, Nature was a piece that succeeded in translating Yeats’ urgent poetics into a arboreal setting. The diction was dour and perfectly applicable to the Elizabethan tone that Yeats deployed so effectively, with the stately beauty of terms such as “pristine resin” and “great Muirs” connoting a far more respectable tone than the “North Face” and “American Idol” imbued imagery of the Youth pastiche.

Creating a pastiche out of pre-existing elements in Sailing added a new dimension of “originality” to the process of translation that I think is entirely lost in most descriptions of the intellectual reasoning behind translation (or as George Steiner would call it the “praxis of translation”). Too often translation is thought of as a simple transformation of a text from its language to another. It would be far more accurate to think of translation as both an interlingual and intralingual system that seeks to transmit meaning from one context to another. The intralingual aspect of this system is epitomized par excellence in the creation of these pastiches, which highlights the universality and importance of linguistic form by emphasizing the flexibility of the language.

To conclude, pastiche is a powerful tool that can be used for the dual purpose of creating new meaning out of pre-existing poem and understanding the original intentions that informed the original text. The praxis of translation is at the epicenter of pastiche, with the original text acting as the source of translation and the pastiche’s writer acting as the translator. The content and quality of the translation is entirely reliant upon the conclusions drawn by the pastiche’s writer. However, like any act of translation there are mechanisms that can lead to unique issues. Creating a pastiche with Sailing has reaffirmed the notion that translation is a praxis that does not merely follow a mechanistic “input-output” relationship. Yes, there is an output with regards to the translating effect of the pastiche. However, this process of translation can only occur if due respect is given to the original construction of Yeats’ poem, therefore forcing a majority of the “translating” process to occur in the actual adherence to Sailing’s original narrative arc and formalism. Heavily modifying the syntax from the original poem or changing up the formal qualities of the poem’s lines can cause the original material of Yeats’ poem to become obfuscated to the point of incoherence. With this in mind it became apparent that pastiches can, like many other translation devices, be used to the point wherein “translating too much” becomes a problem. A notable example of this conundrum can be found in the Wang Wei translations that Eliot Weinberger looked at in his seminal work 19 Ways of Looking at Wang Wei. This is was especially an issue for early Western scholars who saw it fit to add additional elements and filler bits to their translations in order to make their translations seem more “authentic”, a bad tradeoff which caused their final products to be stilted and inorganic. This same “libertine” approach to the source material was also a bane (for me at least) to Nakayasau’s poetry chapbook Mouth: Eats Color, with its over inundated text (having up to several different foreign languages in one poem becomes highly confusing) and a highly jumbled syntax obfuscating the content of her poetry. These prior readings, which I had taken for granted at first as issues “unique” to those particular works, have been thoroughly reframed by my writing of these pastiches, many of which are resplendent with filler content (Youth and Man/Introspection are especially guilty of this). To conclude, the usage of pastiche as a creative means of translation has led me to see the critical need for the ability to commit to intralingual translation as a both a means to fully understand pivotal works in literature and to understand what truly makes a written work “great”.