You may have heard about the relative intelligence of some animals, such as dolphins or chimpanzees. However, other animals are not just mechanistic beings. They too have individual variation, including variation in intelligence. An Australian lizard named the Eastern Water Skink (Eulamprus quoyii) was tested for variation in spatial learning performance. An enclosure was set up with a “safe” refuge and an “unsafe” refuge. The lizards were scared around the enclosure until they entered the “safe” refuge. If they entered the “unsafe” refuge, then the refuge was lifted and scaring the lizard resumed.The spatial learning task given to the lizards was learned by twice as many males as females.

Nature presents different challenges to males and females; males are more successful at passing on their genes if they mate with as many different females as possible, and females are more successful if they select males with the highest quality genes to mate with. It is suggested that males have more spatial challenges, such as location of rival males, to deal with, so males would be better at spatial tasks overall. 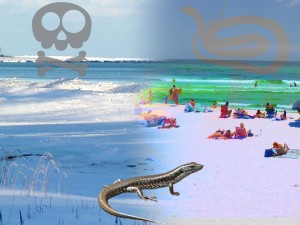 A “Boldness” Experiment. One refuge was designated the “hot” refuge, and the other the “cold” refuge. Lizards prefer the “hot” refuge because they are cold blooded, and need the external heat to warm up their bodies and get energy, similar to a person who wants to bask in the sun at the beach! However, in the experiment, the lizards were scared off the basking refuge into the “cold” refuge. Researchers measured the time it took for the lizards to return to their basking sites. “Bold” lizards were determined to be those that quickly returned to the basking site, and “shy” lizards took a long time to do so.

The learning task was also more likely to be learned in lizards who were shown to be either very bold or shy, but not likely in lizards with behavior somewhere in between the two extremes. It is suggested that the males in this species of lizard may have evolved so that these two different personalities serve different roles. Territorial lizards are known to actively defend against other males, while “floater” lizards travel from territory to territory in search of mates. These two strategies may be employed by “bold” and “shy” lizards, respectively, while a lizard with a personality in the middle cannot utilize either strategy effectively.

It’s amazing to see how evolution hasn’t caused all Eastern Water Skinks to be the same. There is individual variation in them, just like there is variation in our own personalities. This variation in personality causes us to have different interests, work different jobs, and in general live our lives differently, just as it has caused the male skinks to use different strategies for finding mates. Animals aren’t as different from us as one might think!

See the below papers for more information: