Researchers and scientists that have studied the Bottlenose dolphins (Tursiops truncatus) have found a new phenomenon regarding these dolphins: dolphins now use humans to get their food!

As dolphins are known to be one of the more intelligent species with complex cognitive and sophisticated learning abilities, it comes as no surprise that dolphins living in close proximity to human civilization have learned to utilize their resources and surroundings, one of which is human resources.

Examples of this phenomenon include: tailing fishing boats and picking up discarded fishes, visiting fish farms set up for commercial use, and begging directly to humans! In Savannah, Georgia, dolphins were observed to be begging significantly more when fishermen were cleaning and prepping for their next fishing escapade. 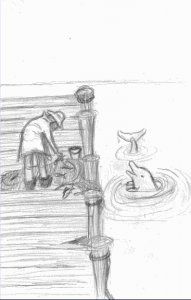 Dolphins observed to be begging in ports near Savannah, Georgia 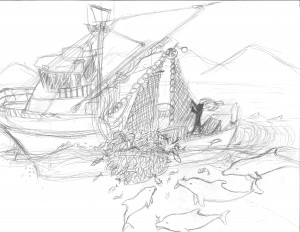 Of course, there are no free lunches in life. In Laguna, Brazil, dolphins and fishermen have a cooperative relationship in achieving the same goal: catching fish. The dolphins will drive a school of fish toward the fishermen and even give off a signal of a tail or head slap to the fishermen indicating when to throw nets out. In exchange for helping out, the fishermen will give their discards to the dolphins. It’s a win-win situation! 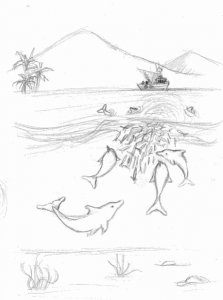 Cooperative task between fishermen and dolphins in Laguna

These phenomena could be attributed to social learning from older dolphins and inter-generational information transfer. Evidence has been shown that dolphins were able to learn complex behaviors in Shark Bay, Western Australia. However, the maintenance of these behaviors could be a collective result of social learning, genetics, and ecology.

Natural selection is about how well species are able to survive and adapt in a particular environment. While dolphin’s populations could evolve new methods for catching fish that do not involve humans or could evolve new limbs making it easier to grab fish, they instead learned and adapted to the growing technology of humans. It might be a lazier option, but in the end, the dolphins get more food either way.

For more information on this amazing phenomena, you can visit the following studies: