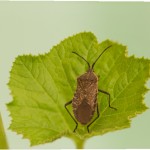 True Bugs and their Burkholderia Symbionts

For many insects, including aphids, beneficial symbionts are maternally inherited by offspring before birth, ensuring infection. While beneficial to the insect, this makes experimentation on host and microbe responses during symbiont establishment more challenging. Many true bug species have obligate associations with symbiotic bacteria that are transmitted externally. These systems allow us to introduce the symbiont through the natural route of infection and then monitor the physiological consequences

Our Burkholderia-related research over the last several years has focused on:

In the coming years, we are particularly interested in developing assays to study symbiont fitness using the squash bug symbiosis.

In collaboration with Jaap de Roode, we are exploring how consumption of certain milkweed species, particularly those high in toxic cardenolides, increase monarch butterfly resistance to a natural protozoan parasite, Ophryocystis elektroscirrha. We are exploring three, not mutually exclusive hypotheses: 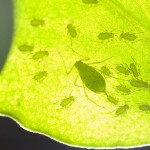 Aphids are host to both beneficial and harmful microbes. Of benefit, aphids harbor, Buchnera aphidicola, an obligate bacterial symbiont, which provides amino acids not available in the aphid diet. Aphids frequently also harbor facultative, symbiotic bacteria that can provide protection against pathogens and parasites. Aphid pathogens include a number of viruses, fungi and bacteria.

Our aphid-related research over the last several years has focused on: 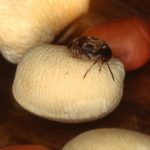 Bean Beetles and their Microbiomes

In collaboration with Chris Beck (Emory University) and Larry Blumer (Morehouse), we are studying the gut associated microbiome of bean beetles (Callosobruchus maculatus). This work developed first as a project to leverage the use of the bean beetle, an excellent experimental system for undergraduate laboratories, as a tool to introduce students to microbiome research. We will disseminate undergraduate research modules based this work through NSF-funded teacher workshops.

In the coming years our bean beetle research will focus on: 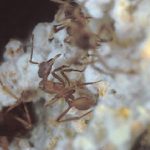 The fungus-growing ant–microbe symbiosis consists of coevolving microbial mutualists and pathogens. The diverse fungal lineages that the ants cultivate are attacked by parasitic fungi in the genus Escovopsis. Highly specific host and parasite adaptations shape the ability of Escovopsis lineages to switch to novel hosts over evolutionary time. Specifically, Escovopsis spp. are attracted to their hosts via chemotaxis. This response is host-specific; Escovopsis spp. grow toward their natural host-cultivars more rapidly than toward other closely-related fungi. Moreover, the cultivated fungi secrete compounds that can suppress Escovopsis growth. These antibiotic defenses are likewise specific; in most interactions, cultivars can inhibit growth of Escovopsis spp. not known to infect them in nature but cannot inhibit isolates of their naturally-infecting pathogens.

Our fungus-growing ant-related research over the last several years has focused on:

In the coming years, we are interested in leveraging the genomic resources we now have available to study the evolution of Escovopsis. 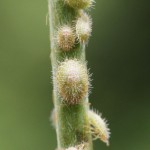 Megacopta Cribraria, the Kudzu Bug, is a pest of soybeans in Asia. In Japan, the ability of these stinkbugs to utilize soybeans is dictated by what strain of bacterial symbiont the bugs carry. In Fall 2009, these bugs were first found in the United States. They have since spread onto soybeans in several states in the Southeastern United States.

Our Megacopta-related research over the last several years has focused on: