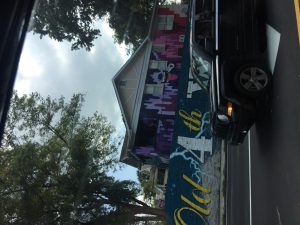 Coffee shops that serve drinks we can’t even pronounce, overpriced high rise apartments, and stores selling jewelry that costs more than our rent, just two blocks away from the houses where we grew up. Gentrification is a phenomenon “occurring nationwide. It’s defined by Merriam-Webster’s online dictionary as, “the process of renewal and rebuilding to accompany an influx of middle-class or affluent people into deteriorating areas that often displaces poorer residents.” There are many examples of this in Atlanta and surrounding areas such as Old Fourth Ward, Cabbagetown, and Grant Park.

Old Fourth Ward Park, specifically, has been in the process of gentrification for decades. “The area west of Boulevard went from 12% to 30% white and the area east of Boulevard went from 2% to 20% white,” according to Wikipedia. Expensive new apartments and condos caught the attention of many buyers, due to the proximity to popular areas like Downtown, Midtown, and Inman Park. Wikipedia describes these neighborhoods as attractive to buyers due to its “urban vibes.” I’m assuming the Urban Vibes being discussed there are the same ones people talk about in New Orleans, the ones that typically make white women clutch their purses to their sides, lock their car doors, or cross the street. Apparently these same “urban vibes” are the ones that developers are looking to drive out with their overpriced living prices that they market as “city living that is financially attainable to a broad spectrum of renters.”

Gentrification displaces native residents and causes affordable housing to become few and far between. The needs of the community becomes overlooked and development planners become the priority. Some people feel that gentrification is a process that takes many years, giving natives to the area ample amount of time to relocate. Proponents for gentrification tend not to use the term, and instead opt for “economic development.” They argue that if wealthy people didn’t move into the areas that they would stay economically undeveloped.

One Reply to “Gentrification in Atlanta: Focus on Old Fourth Ward Park”